Lightning Games and ThinkingStars’ ANNO: Mutationem is a new title to come out of China, making its debut last month on PC and PlayStation consoles after benefitting from PlayStation’s China Hero Project. The game does a fine job setting itself apart from the outset, with a striking cyberpunk pixel aesthetic that nicely blends 2D and 3D. While a convoluted storyline and ultimately straightforward gameplay keep it from rising too high, it’s nonetheless an intriguing game worthy of attention and well positioned to be expanded upon down the line.

ANNO: Mutationem stars Ann Flores, who is working as a private detective in the Skopp City. The game is set in a future cyberpunk world where many of its citizens have been afflicted by the Mechanika Virus, which essentially turns them into cyborgs, while Ann herself suffers from her own condition dubbed Entangelitis. Outside of causing her to alternatively collapse or go berserk, however, information on this condition is not forthcoming and her adoptive younger brother Ryan disappears after he goes off in search of a cure, setting off the story as Ann in turn looks for him. 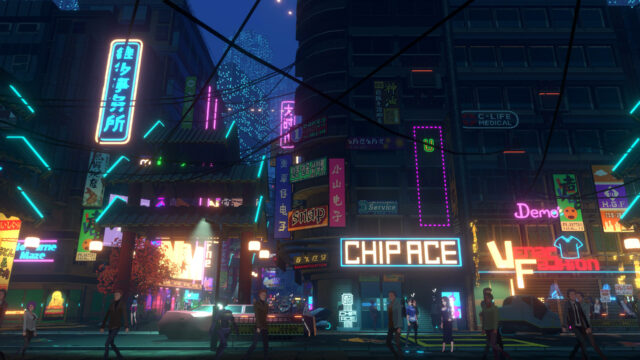 The cyberpunk setting ends up largely supplanted by the supernatural.

Although ANNO: Mutationem starts with the cyberpunk setting, the game’s supernatural SCP Foundation inspirations steadily take over until it’s the sole focus of the finale. These influences are most effective when used within elements such as the logs and computer screens Ann can find scattered around, but it works far less effectively while the secrecy becomes the primary subject of a linear narrative. It leads to a plot that is often incoherent, with scenes that do little but raise unanswered questions, while even base motivations and connections are never satisfactorily revealed. Although some epilogue content is planned and there’s a clear set up for further adventures, the game’s ending provides little closure and the sheer amount of things that are left hanging open makes for a frustrating overall narrative.

Nevertheless, there are some positives in the story. The interactions between Ann and her partner Ayane, who appears primarily as a hologram generated by the drone that follows Ann around and offers support, are delightful throughout the full length of the game. Ann herself is a strong protagonist, whose devotion and love for and from her adoptive family shines through. There are also a good number of quirky characters, and it presents a varied and multifaceted cast each after their own goals, even if what those goals and motivations actually are remain as clear as mud.

ANNO: Mutationem’s most notable achievement is its blending of pixel-based graphics into a mixture of 2D and 3D locales. The game’s areas are divided into rooms, which will either feature some 2D platforming and combat — or both — or more casual 3D exploration. Pathfinding is a largely straightforward matter of advancing through the paths available, although there are plenty of side rooms and corridors players can explore to find extra items. However, the graphics are highly pleasing to look at all throughout and each area of the game is nicely distinct within its cyberpunk aesthetic. 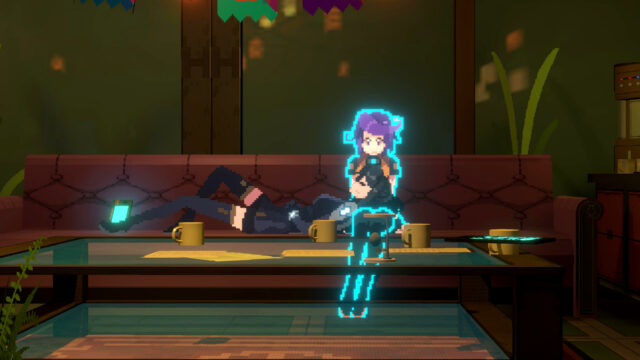 Ann and Ayane’s partnership is one of the game’s highlights.

The 2D combat is fast-paced, with Ann needing to strike enemies while avoiding or blocking their attacks. She has a quick melee weapon assigned to the square button, with a heavy melee weapon assigned to triangle. Ranged attacks can be fired off with the right trigger, initially limited to a rapid-fire pistol with a few heavier options unlocked later in the game, though ammo on these is limited. Enemies are a mixture of humans, monstrous creatures, and giant machines, all of which have a shield bar and a main health bar. Whenever Ann is able to reduce the shield, she has a short time to inflict serious damage with a special move.

Bosses make for appropriately noteworthy encounters, but can be annoying as certain attacks are very difficult to avoid or block, even once players have figured out their attack patterns. This is especially the case in those battles with multiple enemies attacking at once. There are no difficulty options, but a decent enough stock of healing items, which the game isn’t too stingy on providing, means players should be able to cope and almost brute force their way through, even if they might need to rely on Ann’s brief, virtually invulnerable power-up mode to make the difference.

There are a few ways to upgrade Ann. New weapons can be crafted, purchased, and slightly upgraded to give her more offensive power. Meanwhile, Ann has an upgrade tree using two resources — one dropped by regular enemies, the other by bosses — that provide her with base attribute and passive upgrades, as well as unlocking additional attack options. Neither upgrade system is particularly noteworthy in and of itself, but together they give a worthwhile amount of depth and sufficiently make defeating enemies feel further rewarding. 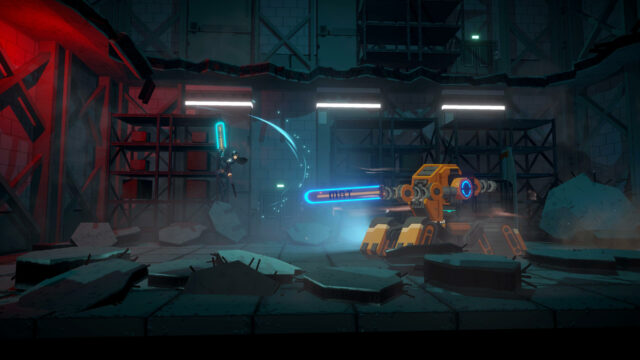 Combat is fast-paced and largely solid.

ANNO: Mutationem contains a decent smattering of optional side content, including a selection of side quests that do enough to hold interest without being particularly memorable, as well as a bar tending mini-game where Ann has to quickly mix and serve cocktails. The benefits from these are minor, but they do a decent job of breaking the rest of the game up and giving players something else to do in the world. The music and sound effects provide a good, if forgettable, audio backing, and while the English voice acting is strong, there are numerous times when the words spoken are not the same as those in the subtitle. It’s never so much that it causes a change in the meaning of the affected sentences, but it’s highly noticeable whenever it happens. The PS5 load times are acceptable, but longer than expected compared to other games on the system.

Despite its issues and a perplexing plot that fails to answer nearly all of its pressing questions, ANNO: Mutationem has the makings of a strong ongoing property. The mixture of 2D and 3D works nicely with its visual style, and it establishes Ann Flores as a strong protagonist well worth spending more time with. As it currently is, ANNO: Mutationem is a solid but not spectacular title and should be able to establish a fan base, with the scope to expand it in the future.