Even the brief taste provided by the beta build suggests a mix of carefully measured battles and character moments, with mechanical and narrative heft.

Back in 2015, Hard West shot, schemed, and bled its way to turn-based, tactical success on the PC. Ice Code Games is building on lessons learned the first time around for Hard West II in another visit to an American West haunted by demons, witches, and uncanny science. Like last time, unforgiving shootouts are the bloody heart of it all. However, this time the story locks on a single band of outlaws and the repercussions of a train job gone bad. Even the brief taste provided by the beta build suggests a mix of carefully measured battles and character moments, with mechanical and narrative heft.

The beta build for Hard West II starts with a train robbery. Gin Carter and his posse ambush a most peculiar line and get more than they bargained for. The train’s full of monsters, the conductor’s not who he seems, and Poor Choices are made. Pretty soon Gin, Indian bruiser Laughing Deer, and hex-inclined Flynn join forces with Old Bill, a literal dead man walking.

Combat will be familiar enough for tactical RPG fans jump right in, but also has plenty of innovation. Moving, attacking, and special techniques require action points, which restore every round. However, killing an enemy enables Bravado Mode, which immediately restores a character’s action points. Bravado kills chain, allowing well-positioned gunslingers to mow down mobs of weakened enemies. Adding further gas to the fire, Flynn starts with the ability to swap positions with visible enemies. Teleporting a hapless sniper into the middle of a Bravado-fueled shootout isn’t just possible, it’s encouraged! 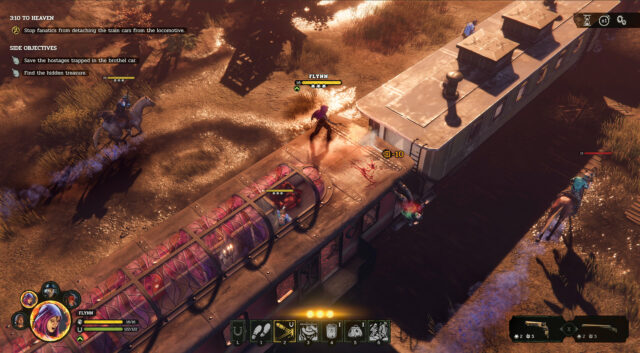 With maneuvers like this, Hard West II would seem to support a shoot-first approach. However, characters are mighty fragile. Careful use of cover between rampages is the safest way to avoid a visit to Boot Hill. Ricocheting pistol bullets off hardened targets like anvils and chandeliers gives crackshots a chance to bypass defensive positions. The first time I tried assaulting a bandit encampment, I over-extended my forces and ended up being whittled down one-by-one. The second time around, I paid more attention to defensive positions and sight lines for a satisfying victory.

Each of the four party members has unique abilities, which can be further modified through a companionship system and by assigning playing cards discovered in non-combat encounters. Dealing the cards is another strategic axis, since there’s a limited supply and higher poker hands correspond to better abilities. Additionally, every character has room to carry two guns, a talisman, and two pieces of consumable gear like dynamite and health-restoring beans.

The opening train job makes an engaging set piece as the posse’s horses keep relative position to the moving train, creating the illusion of rushing across an endless plain. Staying mounted allows flanking and clear sight lines, while hopping aboard the train provides cover and access to the interior. There’s not much need for swapping back-and-forth in this battle, but it’s an exciting option to think about for future encounters. 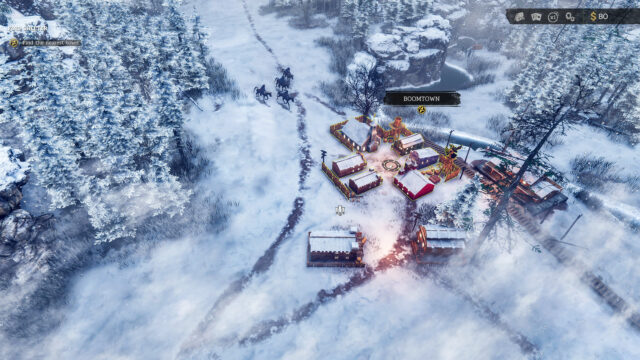 Boomtown’s not the most inviting place, but it’s better than staying in the cold.

Gameplay outside of combat centers on actions that make the next fight survivable. The overworld map contains side-quests and opportunities to share stories around the campfire with the gang. These campfire times offer the first look at the trust system. Talking through issues with Gin’s companions reveals more about them and unlocks new abilities and unique choices in later encounters. If Gin’s allies trust him they’re more likely to stick their necks out in confounding supernatural situations, as Flynn did for me when I asked her to conjure up a solution to an unnatural tree.

As in the first game, the atmosphere is appropriately grim and horrific. Townspeople are either weak or scoundrels, and there’s plenty of blood and despair. The haunting Western soundtrack layers over it all, capturing the loneliness of the fantastic frontier. Character voices are world-weary and irreverent, providing heroic counterpoint to the troubles they see. Some of the jokier lines in battle quickly lose their luster, but it’s a small quibble. 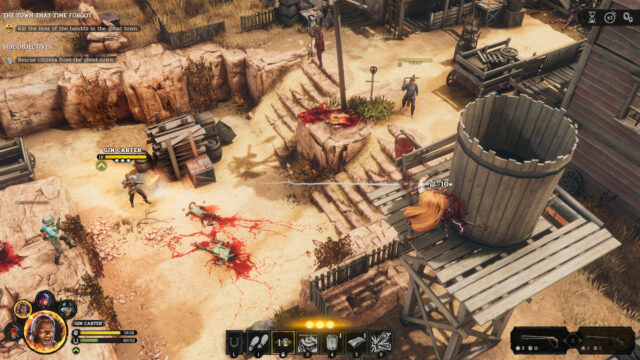 While there’s a lot to look forward to in Hard West II, it also has its share of saddle sores. Setting the camera during combat takes some practice, making it difficult to tell when an enemy can be targeted or exactly where they’re standing. Moreover, I hope Laughing Deer receives deeper characterization as his story progresses, since the first look at the Indian warrior ticks a lot of “bloodthirsty savage” boxes. On a lesser note, several typos marred the otherwise engaging text, though there is certainly time for fixes to be applied.

Based on a little over two hours of exploration, Hard West II feels like a worthy successor to the original. Combat is tactical and challenging, and explores some new design space with wild character abilities appropriate to legends of the Weird West. The game will be available for PC sometime in 2022.

Disclosure: This article is based on a beta build provided by the publisher.