It’s always nice to take a break from the Kickstarter hype cycle to sit down and actually play a game that was funded with backer money. Hard West from CreativeForge Games is a recent victor of the Kickstarter development cycle. It’s an ambitious dark Western that uses multiple points of view to build a sense of grandeur across a land of myth and despair. Over eight scenarios, the story uses several point-of-view characters to connect personal stories of loss with the metaphysical matters of Heaven and Hell. Hard West is a grimly compelling Weird Western that features intelligent, tactical combat. The limitations of its scenario system and uneven plotting make their bloody marks upon its flanks, but it stands tall and brooding in the wind.

Above all, Hard West is devoted to its gritty supernatural atmosphere. Few of the point-of-view characters are heroes. Most are either selfish survivors, driven by want, or desperate pawns to dark puppet masters. Warren, lead of three of the eight scenarios, receives the most nuanced development. On the flipside, non-essential posse members rarely receive more than a paragraph of characterization. As if aware of their disposable nature, the protagonists are apt to sacrifice allies just as willingly as they massacre locals. Sometimes the player can influence a protagonist’s morality, but much of the wickedness is set in stone. Since choices made in one scenario don’t impact the next, apart from unlocking a handful of collectible equipment, it’s difficult to escape the setting’s desolate fatalism. Only the choices made in Warren’s final scenario — the abrupt climax of the interweaving plots — really feel like they have lasting narrative weight.

The story is at its best when dealing with the big ideas of the West; its connective tissue is more anemic. The player often needs to make logical jumps to understand a character’s thoughts. Not all the characters are clearly introduced, and certain objectives only make sense because the quest display presents them as the next required step. The whiskey-voiced narrator is persuasive, and listening to him is a treat, but he drives distance between the characters and the player. “You’re part of an epic Western,” he seems to say, backed by the excellent soundtrack. “Don’t sweat the small stuff.” 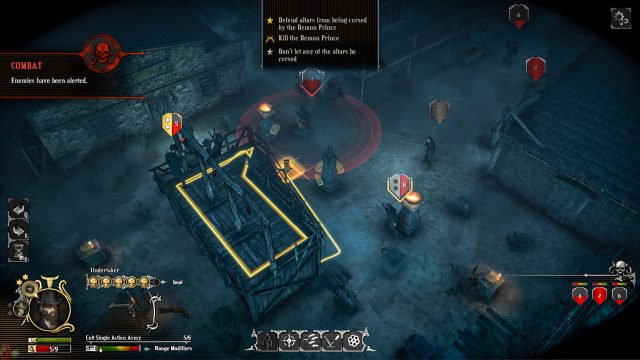 Time to get started.

When the lead starts to fly, survival means understanding the small stuff. It’s a satisfying puzzle to piece together how terrain impacts line of sight, damage, and the action point economy. When a plan comes together to gun down an entrenched gang of ruffians, it’s hard not to feel like a master of explosive risk management. Characters are squishy, and moving without cover is a good way to be gunned down or earn a permanent wound. Non-essential characters can die for good, and many battles are long enough that losing a hired gun to continue becomes an acceptable loss; saving mid-battle isn’t permitted. Although combat is Hard West‘s greatest strength, it’s not without its warts. It would benefit from an overwatch feature, allowing characters to stand on guard and automatically attack enemies who get too close. While the AI is smart enough to avoid outright charging a member of the posse, having the same access to area control as the opposition would even out some rough points.

Most battles are “kill ’em all” or “kill the leader” affairs, but there is enough variety to keep tactics fresh. Search and rescue missions, timed objectives, bosses with special weaknesses, escape missions, opportunities for plunder, and stealth missions all add alternate objectives. Stealth missions are most frequently used as opportunities to acquire better positioning before the shooting starts. Enemies remain stationary and only react if a character enters their narrow field of vision. After alerting an enemy, combat begins in a number of rounds based on the scariness of the alerting character’s equipment. However, in the interim, the character can pull a gun on the unlucky sentry and stick him up indefinitely, allowing allies to get into more favorable positions. Marching up right next to a no-good ruffian while wearing a bright red robe highlights the unnaturalness of the stealth system.

Combat is broken up by visiting locations on the overworld map and resource management. The wealthy adventurer manages Central American workers in a search for lost gold; the mad scientist balances the gains of his research with his sanity; the gold miner has a limited number of days to make a profit. Whatever the scenario, its choices are geared toward hard decisions. Is it worth taking the cursed gold, if the alternative is starvation? Is it acceptable to kill innocents if they’ll raise an alarm? There are rarely any clues as to whether a choice will be rewarded by the game, which comes off as both unfair and entirely appropriate. The “right” answers aren’t always appreciated, and the “wrong” answers aren’t always punished. Rewards take a variety of forms, including Steam achievements, character advancement, and not having to be a slavedriver. 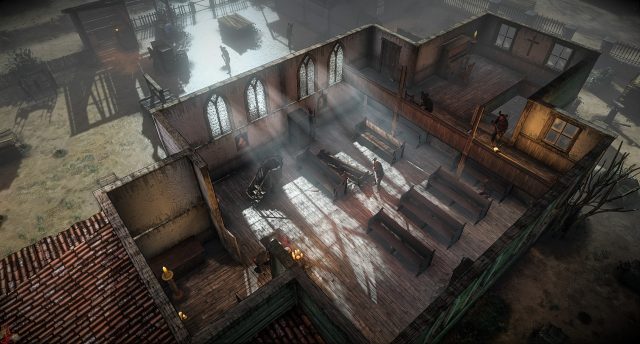 Buildings! My one weakness!

Character advancement is handled with an innovative poker card system. At story-appropriate moments, the player receives playing cards. Each card grants a static bonus and a special ability, such as being able to turn into a beefy demon or ricochet bullets from the scenery. Depending on where they are in the scenario, each PC can create a hand of 3-5 cards. Completing different poker hands, like a pair of jacks or a full house, provides additional bonuses. At first blush, the system is more open than it turns out to be in practice. Certain combinations pair exceptionally well with key character builds, discouraging too much experimentation. Even so, the powers display good variety and assigning them is flavorful.

Hard West has flavor and grit in spades, but it’s hard not to wonder what it could have been had its Kickstarter campaign been even more successful. It’s not a game for anyone who wants to foster a posse through a single campaign, or who cares about individuals over the demands of the conglomerate plot. Analytic-minded hombres who appreciate unforgiving battles, step right up. 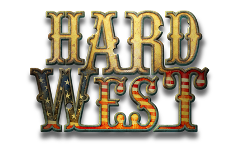