In this edition of the column, Sam Wachter gets her pro-strats on, as she dives into Arcade Spirits: The New Challengers, and becomes an esports sensation.

The original Arcade Spirits struck an emotional chord with me. Growing up, I was an arcade brat, quarter-punching my way through some of my favourite arcade games such as The Simpson’s Arcade Game and Ms. Pac-Man. Fortunately, I also had a parent who supported my habit and enjoyed the time we spent bonding over arcade cabinets. My dad was not an avid gamer (since he knew all the backgammon opening moves to his tip of his hands), but he saw the joy that games brought to my life. As the world has changed and arcades no longer are a place of gathering, the gaming world has turned to e-sports, with competitive gaming taking the world by storm. In Arcade Spirits: The New Challengers, we watch a rag-tag laundromat esports team as they claw their way to number one.

The Arcade Spirits series is all about love and gaming. Players take on the role this time of Seeker, a reclusive gamer who is a huge fan of Fists of Discomfort 2, an online game that boasts a crazy competitive scene. After learning their best friend (and rival) is been poached by Play 2 Win’s esports team, they enlist the help of Iris, an illegal AI app that acts as a “personal assistant” (aka meddler) and taps into the player’s strongest desires. Sensing loneliness, Iris leads the player to Good Clean Fun, a laundromat-pizzeria-arcade, where they meet a group of individuals who all share a love of gaming. There they create their Fists of Discomfort 2 team, with the grand dream of making it to the FoD2 Pro Tour. 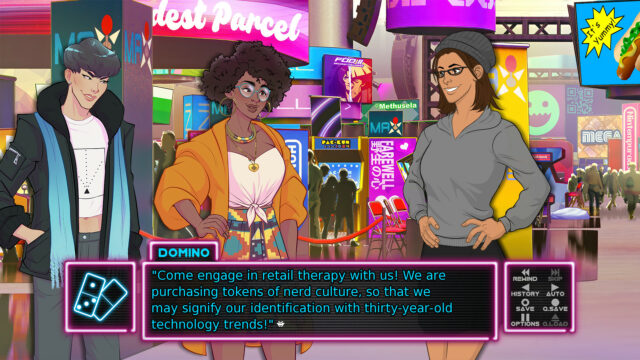 Since this is a visual novel the most important part of the game is its story, and it’s fantastic, delivering the same emotional impact as the first. Players build up their relationships with their teammates to reach their core goal of getting to the Pro Tour. The player can respond to decisions with a variety of labelled attitudes, such as gutsy, flexible, kind, quirky, or steady. While players are free to choose whichever option they wish, there are often consequences in choosing a decision that may not fit another character’s moral compass. As the team’s manager, players will have to make the challenging decisions that best support the overall goal of the team. In these more intense decisions, players can only use their top two emotions to respond. At any time, players can see their relationships with the other characters, as well as which emotions dominate their overall responses.

Let’s also not neglect that this is a dating sim, and forging romantic bonds is part of the fun. The New Challengers has a great cast of characters, and I spent most of the game struggling with who I wanted to date because I loved all of them equally. There’s the hot-blooded red-head Zapper, who is always ready to throw down, as well as Robin Hood wannabe Locksley, who may be into some shady dealings. Jynx is a woman with Syringomyelia, but wants no one’s pity, while Grace is the creator of Iris, who also happens to be running away from her family’s corporate dealings. Rhapsody is a freelance blogger who loves FoD2, and Domino is a nihilist looking for a bit of hope. Each of these characters is completely loveable and uncovering their stories as the game progresses feels incredibly rewarding, especially if you’re an empath machine like me.

To build relations, The New Challengers has built-in downtime during chapters, where players can talk to up to three different people before the next major plot point. It means choosing which characters you have the most interest in and working towards uncovering their larger backstory. Characters that the player has high relationships with will also come to aid the player in tough situations, so it’s important to work on building as many bonds as possible during a playthrough. Players can also focus on merely building friendships if romance isn’t their jam. 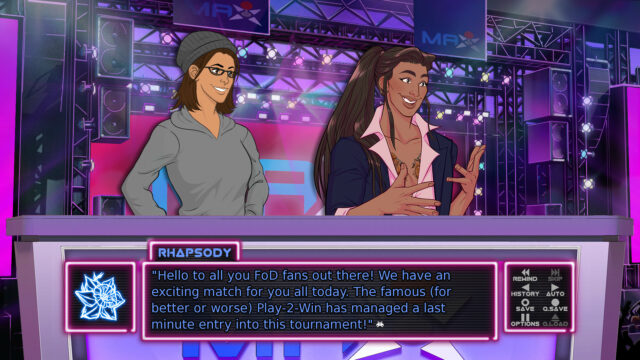 Here’s some commentary for you: P2W sucks!

Much like the first game, players are given large amounts of freedom to customize their protagonist. There are a lot of additions to the character creator, including more pronoun choices, body types, hairstyles, accessories, and more. Players are also given the ability to design their rival, though their appearance is a bit more set in stone. In addition, players can adjust their appearance and preferences at the end of any chapter interval, which is a handy feature. On top of these additions, one can also import their save data from the first game to have those decisions affect some of the outcomes in The New Challengers. It was awesome to see how my decisions in the first game changed the landscape for The New Challengers.

Similar to the first game, The New Challengers is divided up into eight chapters, each unlocking bonus art as each is completed. Players can also enjoy learning how to play Fists of Discomfort 2, which is implemented like a rock-paper-scissor-style game. However, it’s not mandatory to play the minigame, as it can be skipped entirely. This sequel does a lot in terms of being super accessible and inclusive, while also highlighting the importance of these elements through the game’s cast of characters. There’s a lot of thought and care put into making The New Challengers a game that can not only be replayed multiple times but is accessible to any kind of player.

While esports itself is not my bag, I found myself completely invested in Arcade Spirits: The New Challengers. Not only was the story engaging and the character moments incredibly tender, but even some of the darker moments hit close to home. The cast all have their unique struggles, and the story is all about building your friendships up, showing them that they are worthy of love and compassion, and providing support. Fans of the first game will find it just as endearing, but even if you haven’t played the first game, The New Challengers stands on its own and is worth your time.