Made in Abyss: Binary Star Falling into Darkness Set for Fall

Spike Chunsoft announced that action RPG Made in Abyss: Binary Star Falling into Darkness will release in the fall of 2022. The game, based on the Made in Abyss manga and anime series, will release for PC, PlayStation 4, and Nintendo Switch, with Numskull Games publishing the title in Europe. To go with the launch window announcement, Spike Chunsoft released a new trailer and announced a $89.99 Collector’s Edition, which includes: 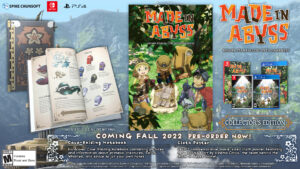 Made in Abyss: Binary Star Falling into Darkness will include a retelling of the storyline from its animated adaptation, as well as an original story supervised by series creator Akihito Tsukushi. The series is set around a giant hole in the earth named Abyss, which holds remnants of a long-gone civilisation.