All in! Games and The Farm 51 announced that dedicated PlayStation 5 and Xbox Series X|S versions of Chernobylite will release on April 24, 2022. The versions will release alongside a PC Enhanced Edition and the Blue Flames DLC. The PlayStation 5 edition will be available physically through a partner with Perp Games.

The PlayStation 5, Xbox Series X|S, and PC Enhanced Edition versions will add enhanced graphics including ray tracing, as well as 4K at 30 FPS and 1080p at 60 FPS resolution options. The PlayStation 5 version will also include DualSense haptic feedback and Activity Card support. Those who own the currently available PlayStation 4, Xbox One, or PC versions will be able to upgrade to the relevant enhanced version for free.

Blue Flames is the first of four planned content additions for 2022 and will be available on all of the game’s platforms. It includes a free content update dubbed “Memories of You” that goes into Tatyana and Igor’s backstory, the new Silent Assassin crossbow weapon, and additional paid content.

Chernobylite is a survival horror RPG that follows Igor, a physicist and former employee of the Chernobyl Power Plant who is investigating the mysterious disappearance of his fiancé, Tatyana, thirty years ago. The game recreates the real-life Exclusion Zone site using 3D-scanning technology and features free exploration, stealth, combat, crafting, base-building, resource management, and a non-linear story. Those looking to read more about Chernobylite can check out Zack Webster’s review of the PC version. 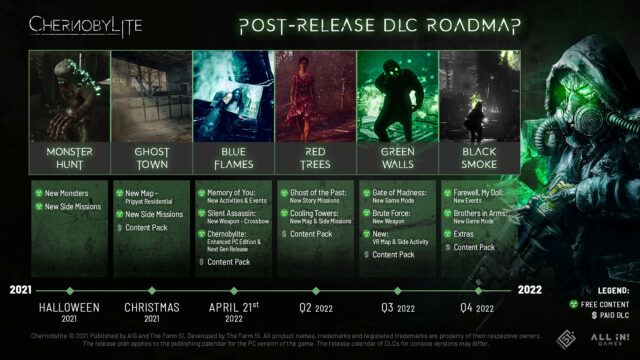