Living in the Danger Zone

The legacy of Chernobyl has had a surprisingly long tail in video games. S.T.A.L.K.E.R.: Shadow of Chernobyl was an ambitious but flawed game at launch that nevertheless made a lasting impression as an intricate mix of FPS, survival horror, and RPG, an influential title that mods would spend years patching up into an unforgettable experience. While a proper follow-up to that title is coming soon, the interim years have seen several games that have taken different aspects of it and attempted to flesh them out. Chernobylite is the most recent of these attempts and the most indicative of its time. It combines action, survival elements, and role-playing, though with an eye on more modern trends such as base-building and crafting. The result is a competent if unspectacular title that fills the gaps between its fresh ideas with a lot more tired ones.

Chernobylite begins during a heist on the sarcophagus of the Chernobyl Nuclear Power Plant. Players take on the role of Igor, an ex-employee searching for his missing wife Tatyana. A private military company has set up shop around the NPP and is performing experiments around Chernobylite, a valuable mineral that has seemingly supernatural properties. The heist is foiled by the appearance of the Black Stalker, a super soldier who can manipulate Chernobylite to travel through time and space. Not to be outdone, Igor and his surviving companion Olivier set up a base in an abandoned warehouse, utilizing a Chernobylite-powered portal gun to quickly travel between locations within the Exclusion Zone. From this base, the player must make excursions into the ruined city of Pripyat and its surrounding area to discover more information regarding the experiments at the plant, gather more allies, and prepare for another heist. 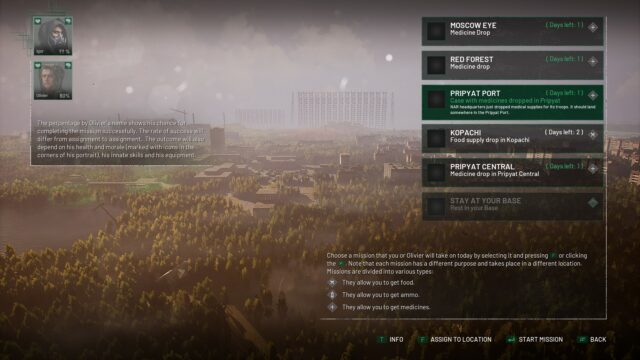 The base offers a good-looking overview of the areas you can visit and the progression of enemies and elements over time.

It’s here that the modern trends begin to show in the game’s design. Each day, the player will choose a mission to undertake, returning to the base upon completion. The missions take place on bespoke maps, each representing an area of Chernobyl. These map layouts are static, but enemies and hazards are altered depending on the type of mission and prior story decisions. Visually, this does an excellent job of showing the worsening conditions as time passes. Repeat journeys to the same maps will demonstrate spreading radiation, increased military presence, and monsters surging out of Chernobylite wormholes. However, in practice it does little to shake up what one does during a mission.

Very few missions in the game involve more than arriving at a location and collecting an item of some sort. Along the way, players can sneak, shoot, avoid environmental hazards, and gather miscellaneous resources in service of the game’s crafting systems. However, the stealth gameplay is incredibly basic, the gunplay is serviceable but nothing to write home about, and most of the environmental hazards have a “correct” and easily achieved solution. Radiation poisoning seems to be the only status effect that is difficult to protect against, but its primary effect is to temporarily reduce max health, a problem remedied by consuming a readily available item. Psyche tracks Igor’s mental health as he commits murder and encounters horrifying monsters, but this too is cured by liberal application of easily acquired healing items.

Players can craft traps but only outside of combat, making their application more difficult. Monsters offer a slight change of pace to the military opponents, but all of them are dealt with by shooting their weak points. None of the systems are bad, they just fail to stand out or evolve in interesting ways. Story missions can sometimes break from this formula, generally by having the player go to multiple locations over longer distances, offering more substantial rewards, and requiring a plot-related decision that can affect the story and future missions. Some of these utilize some pretty effective set pieces, but more just feel like extended generic missions, albeit with more interesting context. 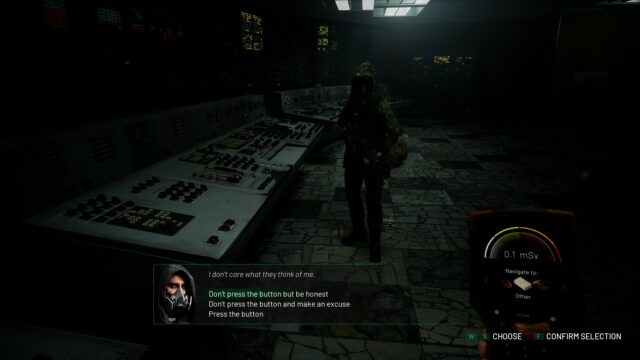 Not all dialogue decisions have lasting impacts; some are just for flavor.

Once a mission is completed, players teleport back to their base, at which point they are free to craft and talk to companions. The base-building is the primary way players upgrade equipment and spend gathered resources. The game takes several things into consideration for the base, including protection from radiation, air quality, comfort for the companions, and how much power it consumes. Building workbenches that can provide upgraded equipment tends to increase radiation or air pollution, so other structures that do nothing but improve air quality or offer radiation protection have to be built or else the performance of companions during missions will be adversely affected. Much of this feels like busywork and by the halfway point of the game there was nothing left to build, with excess resources simply spent on stockpiling ammo and healing items. Even the amount of upgraded equipment is limited; it just offers bog-standard improvements to weapons without any new gameplay additions.

Even though the base isn’t entirely without flaws, it does provide a homey feel and is where players will spend most of their time with their companions, who are on the whole a success. Though initially the party is just Igor and Olivier, players will soon have the option to ally with other people from throughout the Zone. It’s easy to dismiss the supporting cast at first, but each of them slowly develops, if not into entirely well-rounded characters then at least entertaining ones. Outside of the choices players will get to make at key points in the story, companions are also where more of the RPG elements come into play. Each ally has five unique skills to impart on the player, and it’s unlikely players will be able to unlock them all by the end. Unfortunately, most of the skills in the game aren’t particularly interesting, mainly existing to make the survival and crafting mechanics less of a headache or increase damage with certain classes of weapons. Acquiring new skills at least provides a brief scene between Igor and the companion, offering a small amount of additional characterization. Companions are also assigned to missions with a success rate based off of the area and their equipped weapon and armor. They return with minor rewards that by the end of the game can be flat-out ignored, but their presence is necessary for a more successful heist during the finale. 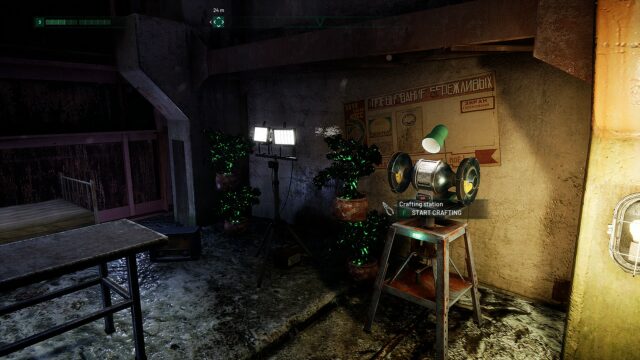 Trust me, those radioactive plants stacked on top of each other are really doing a boon for the team’s morale.

Chernobylite‘s narrative is hard to pin down. The game presents itself as open-ended, letting the player choose their path through the narrative. But story missions are offered at an even pace and companions can’t complete them, though they can make them easier for the player to complete down the road. This greatly improves the pacing, but there’s little incentive for the player to tackle non-story missions, as the story missions provide the most impact for a successful heist. The story starts out in wacky sci-fi territory only to drop it for a good chunk of the game before slowly integrating it back into the plot. The game’s mystery and backstory are delivered via recreations using Igor’s VR headset, which allow for some cool visuals but end up as very clunky ways to impart the information. Much of this is made up for by the climactic heist on the NPP, which follows in the footsteps of Mass Effect 2‘s final mission, and even mostly sticking the landing. It plays out like a condensed version of the rest of the game, with the player assigning roles to companions and making key decisions in the moment that can lead to disastrous outcomes if too unprepared. The ending might just be the best part of the game, even as it devolves into sillier sci-fi schlock.

Though Chernobylite makes attempts to recreate the isolated and eerie mood that the actual Chernobyl emits, it is constantly undercut by the enemy’s persistent military presence and the game-y structure. However, the game’s audio is good in spite of this. The soundtrack delivers some somber tracks that fit the game, and the voice actors, especially in Russian, are outstanding. It was a pleasant surprise to be able to come away from the game humming some of the more common tunes. Outside of a few set pieces that show off more creativity, most of the game’s visuals are adequate.

It’s difficult to say if Chernobylite is worth someone’s time or not. At about twenty hours, the game never overstays its welcome and none of its composite elements are major detractors. There’s a pleasing amount of fun to be had executing the heist at the end and in interacting with the cast. However, it is a game that sets out to do a lot of little things, none of them deep or meaningful. As an RPG it’s a fairly light endeavor, but the workmanlike quality and some cool decisions will do enough to keep plenty interested throughout its whole runtime.

Tags: All in! GamesChernobylitePCThe Farm 51