Gust has provided another update for its newest Atelier title, Atelier Lulua: The Scion of Arland. In addition to the new screenshots, artwork, and details concerning more characters and gameplay elements, the developer also released the second official Japanese trailer for the game, which can be viewed below.

With Atelier Lulua returning the series to Arland, many characters from the Arland trilogy return. Those from Atelier Rorona and Atelier Totori were previously detailed, so this update focuses on returning characters from Atelier Meruru. Chief of these is Merurulince “Meruru” Rede Arls herself. The former princess of Arls, she helped prepare Arls for its merger with the Arland Republic and is now enjoying being free of her royal responsibilities. Also returning is Meruru’s childhood friend Keina Swaya, who now runs the city hall in Arls. Meanwhile, a new character in the game is Benon Armster, who runs the Armster Nursery School in the town of Arculis. 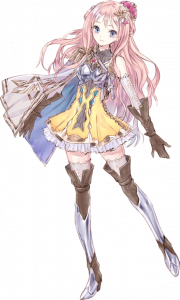 The main driving force of Atelier Lulua‘s story is the “Alchemy Riddle”, an ancient book that only main protagonist Lulua can read. Though experienced alchemist, and one of Lulua’s mentors, Totori can’t read it, she is able to offer Lulua advice and encourages her to build up her own strength rather than relying solely on what the ancient text imparts. This is important as sometimes Lula will not be able to understand what the text says, making her resolve to explore the world to help understand its pages.

While there are plenty of main events related to the story and the characters that journey with Lulua, Atelier Lulua also features lots of side events for characters in live in towns such as Arculis. Players will be able to see what events are available to view from the shortcut menu in town.

Atelier Lulua‘s combat system includes Primal Arts, special powers that manifest based on the characters in battle and their relationships. For example, when Lulua and Nico are in the front row, the art “Muscle & Slender” can be activated to reduce the wait time between turns; meanwhile, Lulua and Piana can join forces, again in the front row, to activate “Power of Master and Disciple” to reduce the stun effect of damage as well as reduce wait time after using an item.

Atelier Lulua sees the series return to the setting of Arland and comes shortly after recent re-releases of the preceding trilogy of games. The game will be released for PC, PlayStation 4, and Nintendo Switch in North America on May 21, 2019, with a European release to follow on May 24, 2019.