No Shame in Quitting a Game

With compelling stories and engaging battle systems, RPGs often have a lot of depth, so players don’t mind sinking their time into the immersive gameplay. But despite their richness, a player may sometimes feel dissatisfied. They’re usually not casual pick-up-and-play games and instead require much mental overhead, so it’s possible to experience the dreaded feeling of burnout. Sometimes players will be bored with grinding, weary from overpowered enemies, or they’ll encounter a repetitive imbalance that drains the fun out of the game. When this occurs, especially after investing many hours, should a player quit a game? How does one know when to put down the controller and move on to the next potential great RPG? While no player wants to have unfinished games, there are times when it’s best to pause or altogether decide that it’s game over.

When starting an RPG, players expect to embark on an adventure and eventually beat the game, but when a player realizes the game is beating them, disappointment sets in. I don’t like to admit how many RPGs I did not finish, but a recent one might get added to the “did not finish” pile.

Playing part two of Fantasian — overall a great RPG — my pace slowed to a crawl as I succumbed to crippling injuries from too many big boss beat downs. The title is imbalanced by overpowered major bosses, which appear around every other corner and require special skill sets and strategies to overcome. While this brings a strong sense of addictive challenge, the numerous boss battles feel like repetitive and drawn out tests of endurance; they demand tireless grit and wit since they often wipe out the party on several attempts. When this caliber of combat occurs once or twice, players accept the fly in the ointment. However, when it happens every single boss battle, players are demoralized and exhausted. I persevered in my Fantasian conquest to a point over 60 hours in the game before feeling it was time to take a break. Licking my wounds, I found relief in Animal Crossing: New Horizons, a soothing balm of a casual life-sim outside the RPG genre, and in Ara Fell, a retro 16-bit indie RPG, filling me with fresh nostalgia. Call this an indefinite pause; I plan to resume and chip away at Fantasian eventually. 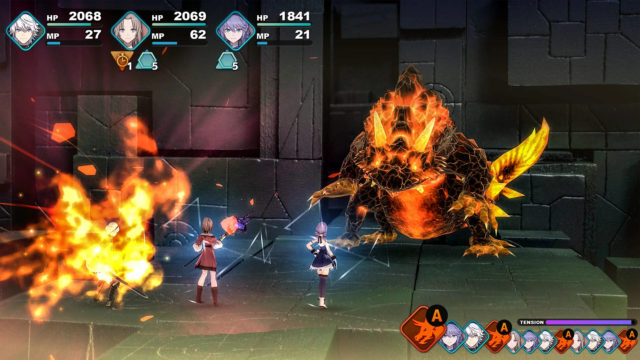 This early boss in Fantasian wasn’t too challenging, but many are, especially later in the game.

All players face such challenging games from time to time. Nobody likes to give up, but nobody wants to waste their time on an unfun or unfulfilling experience either. These are tricky dungeons to crawl — especially when playing a title within a long series; it may be best to cut one’s losses, end the struggle, and start a new promising adventure. Unfortunately, this feels like capitulation and admitting defeat. That itself is a tough boss to beat, but worse would be to continue fighting a fight one cannot win, wasting time and energy.

When it comes to playing RPGs, I submit that the most winning strategy knows not all battles are worth fighting, and players should go with their gut when they feel it’s time to step away from the game and try another. Maybe after a good break, a player will resume a previous difficult title with a refreshed perspective or a renewed vigor and finally do a victory dance over the ultimate boss’ dead body — or maybe not. With so many good RPGs to play, gamers shouldn’t dig in their heels on an arduous RPG, getting beat down. On the flip side, gamers shouldn’t beat themselves up over a game they do not finish.

What else might help players eat humble pie and know when to quit a game? One idea, frequently mentioned by our own Anna Marie on the RPG Cast, is the “five-hour rule.” This handy guideline gives players impetus to try any RPG — even one outside their comfort zone, like going from a strictly turn-based to a real-time action RPG — without fear of overcommitment. After five hours of playing a game, if the player is not having fun, they should stop. Developers know there is limited time to hook a player into a gameplay loop, so five hours is plenty of time for players to give before realizing a certain game isn’t for them. Players must remember some RPGs just don’t click and that it’s okay. 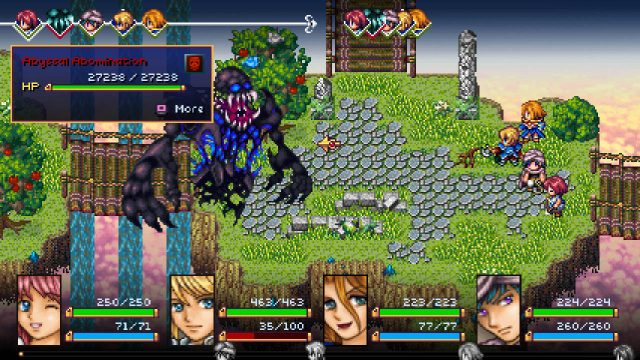 Another idea is “comfort” gaming or palate cleansing. This is the act of playing a non-RPG title — or maybe a shorter RPG in casual or story mode — after completing (or quitting) a long or deep RPG challenge. Many players seeking entertainment find quality escapism through robust RPGs. However, as mentioned, this genre often requires mental fortitude to dive into another world of involving gameplay systems. RPGs also demand stamina since they typically span many hours to finish. Generally, these “costs” of RPGs pay off nicely. That said, it helps players if they don’t binge on RPGs and instead alternate with other genres.

Basically, that’s what I’ve been doing since I finally paused Fantasian’s malicious monster extravaganza and found relief in Animal Crossing’s quaint and charming island paradise. It’s an ideal comfort game to cleanse the palate and provides wonderful juxtaposition from a grindy old-school RPG. At the same time, the five-hour rule helped me try the indie RPG Ara Fell; I’m enjoying it so far.

As promising as some RPGs are, the reality is not all of them work out. Players should give themselves space to walk away when that happens. Some RPGs, however, are truly great, but a gamer might find they simply hit a wall or otherwise don’t have the gumption to do more than button mash through a casual title. Players should remember it’s okay to take a break. In the end, gaming is about fun. If a game — no matter the genre — causes grief, then by all means, stop playing it.