The basics for a fun and challenging turn-based tactical game are here with some interesting puzzle and traversing mechanics, not to mention some adorable player characters whose loss will be felt during every unsuccessful run through the ruins.

RPGamer got a chance to take a look at how Freedom Games and OverPowered Team’s tactical roguelike Ruin Raiders is shaping up with a hands-on thirty minute demo.  With the demo including a brief tutorial on the game’s combat, a look through the beginning base, and an example floor of a dungeon, Ruin Raiders looks like it will be a punishingly difficult rogue-like with a focus on careful strategy or each run will end in ruins.  Adding puzzles and traversing with adorable animal characters to a traditionally looking cover-based tactical combat systems, there is plenty to look forward to, but there is a lot of balance to maintain in a roguelike.

There was not a big focus on the narrative.  The story does follow a group of anthropomorphic animals that delve into different dungeons in a one-way trip to collect limited resources to send back to their headquarters, but there is not much time to grow a connection to these characters as they will die on the journey.  It is hard not to care though, as each character is based off of an adorable animal, with a cat, dog, and bird available from the start, with the player unlocking a salamander, walrus, and rhino for a total of six classes.  Lore will be found through notes left behind that can occasionally be found in treasure chests.

Before diving into a dungeon the player sets up a squad of three raiders.  Purchased gear can be bought at the starting base shop or in safe hubs found in the dungeon.  These safe hubs also provide healing to weary travelers if needed.  Weapons in the game are easy to customize and work with and none of the weapons are locked to a particular class.  Customization is possible with some of the weapons through an add-on system.  Rifles, pistols, shotguns and sniper rifles have two slots available for add-ons, while flamethrowers and rocket launchers were blocked from upgrades.  An example of an add-on is the Pulse Emitter mk 1, which adds a ten percent chance to stunning an enemy after a successful hit.  When equipping these add-ons, players will want to be certain that weapon will be used frequently because there is no way to un-equip the upgrade and replacing it will destroy it.  Treasure is found after each combat and every few rooms there is a treasure chest, however eridium, the game’s currency, is not acquired quickly, making for a scavenge hunt situation where luck plays a big part. 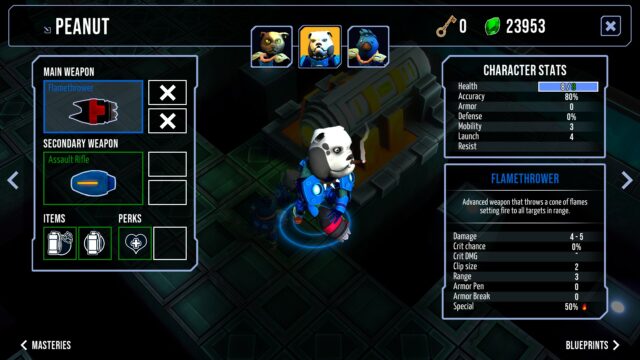 Must protect the peanut.

Characters start combat with two action points, both can be used to move farther, or move and attack if they have a light firearm, while using a heavy firearm takes both action points.  Each raider has two weapons equipped that can be swapped on the fly without using any action points.  Weapons in Ruin Raiders are so strong that they take two shots at most to take down any character.  This makes strategy and maneuvering more important and can lead to cover-based shootouts where the luckiest striker wins.  Health totals start off low, adding to the danger for players.  Luckily, characters only stay dead if the entire team is wiped out, with fallen characters popping back up after combat ends.  Health can be replenished at safe-hubs or by using medkits, which can be purchased and will be needed in large amounts to survive.  One of the best ways to add health is through equipping one of the perks available that gives a boost of two max health.  Perks are one way the game adds stat increases to the characters to give them an edge in surviving.  Death lurks around every corner though, in part due to the game having punishing attack rates from the abundant cover use per battlefield.  This is not necessarily a detriment as a game with true percentage rates would be refreshing, if the AI did not prolong combat arbitrarily due to playing it safe and taking defensive positions.  Flamethrowers are the exception to this as they have a guarantee hit and do massive damage; a shorter range and a likelier chance to be hit are the trade offs for this powerful weapon.

Each raider comes with a skill-tree of stat increases and skills tied to which animal they are.  For example, cats have the ability to run-and-gun allowing an overwatch to occur even after movement.  Overwatch is an action ability to have the character wait for an enemy to enter their range and automatically attack.  These skills and stat upgrades are tied to a tree that unlocks as levels are gained.  Skills are not automatically learned, they need a piece of entium core to fit into place for the character to use the upgrade.  These entium cores are found in treasure chests in the dungeons or bought with a decent amount of eridium.  Like with weapon add-ons, a piece of entium can be equipped to a character that has not levelled yet, leaving that core tied to the character with no way to remove it.  Tying character progression to anything but experience is a risky proposition, but it promises that every level-up will be important.  Defeating enemies will net killing blows additional experience, but everyone gains at the end of each combat. 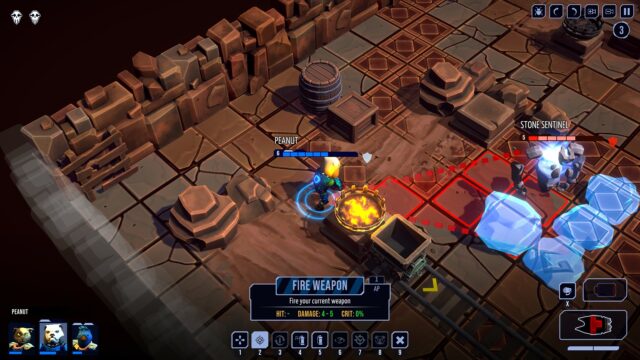 A flamethrower is a dog’s best friend.

While exploring the ruins the player will come across rudimentary puzzles that lead to treasure.  These are planned to be switch-based puzzles involving a particular sequence, or exploring the floor and activating the switches in a particular order.  This frees up the combat loop and allows for more freedom of movement while traversing to provide some variety.  Traversing felt free, and the animal characters are adorable, but the looming threat of any new room being the end of a run due to combat adds some tension.  An example of this is stumbling into the boss room before being fully prepared.  These boss fights are difficult and throw new mechanics at players.  The demo’s boss created a falling rock trap that would target a character for a lot of damage if they stayed still, if they moved those rocks would turn into a new combatant on the next turn.  Bosses are set to be at the end of each biome, a biome will consist of three dungeon floors with a similar aesthetic of twelve to twenty rooms per floor

Ruin Raiders has a long way to go with balancing exploration and combat, as the roguelike genre is already punishing at the best of times.  The basics for a fun and challenging turn-based tactical game are here with some interesting puzzle and traversing mechanics, not to mention some adorable player characters whose loss will be felt during every unsuccessful run through the ruins.  Ruin Raiders is planned for a full release later this year on PC.