Nihon Falcom provided new images and details for the upcoming The Legend of Heroes: Kuro no Kiseki. The update introduces two new characters: Risette Twinings and Quatre Salision. Risette is 20 years old and a concierge at Marduk Total Security Company. She is polite but skilled at combat and has a business relationship with protagonist Van, which allows him access to weapons and apps in return for his data from testing them. 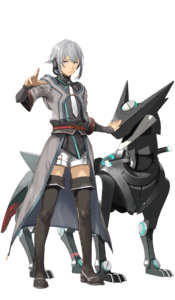 Quatre Salision is a 15-year-old researcher currently undertaking a course at Basel Science University. He specialises in Orbal Drones, which use artificial intelligence, but he also helps out with the biology and physics departments as well as the observatory. As a child he was adopted by Dr. Latoya Hamilton, who is known as the mother of the Orbal Revolution.

Kuro no Kiseki is set in the diverse Calvard Republic, the eastern neighbour and superpower rival to the Erebonian Empire. To go with the previously detailed capital of Edith, Nihon Falcom detailed the cities of Langport and Basel. Langport is a port city in southern Calvard and is regarded as the country’s second most important city. It features notable business and shopping districts as well as a glittering night skyline with skyscrapers. Meanwhile, Basel is an industrial and academic city in southwestern Calvard. It is currently undergoing a joint project between its academic and industrial groups to upgrade its technology.

Two important factions in Kuro no Kiseki are the Marduk Total Security Company and the Verne Industrial Company. Marduk was founded ten years prior, and is a private military company that has been expanding in recent years. Verne is based in Basel and is often compared to the Erebonian Empire’s Reinford Group. It is currently investing in new technologies such as vehicles and video technology.

The sixth-generation tactical orbment, known as Xipha, plays an important role in combat and uses shards of ether to activate its various functions. Hollow Cores are mounted in the centre and impact attributes and attack properties of the wielder, and come equipped with an AI that offers voiced guidance. Abilities and arts are mounted using Arts Drivers, which sometimes have customisable slots that let users insert their own Arts into. Users can slot quartz into four different lines, which provide passive bonuses including elemental resistances, attribute boosts, etc.