When things finally click, it’s extremely rewarding to see the little hero traversing the road over and over again with little to no problems, collecting resources and ever-improving gear, with everything working like a well-oiled machine.

I didn’t quite know what I would be in for when approaching Four Quarter’s Loop Hero, but publisher Devolver Digital’s solid track record of games gave me the impression that the game would be an interesting experience. What I didn’t expect was to become completely hooked on its premise and gameplay. Loop Hero takes place in a world that is facing a cataclysm: creatures, environments, stars, and even memories are being erased by a lich, and an unnamed hero is the only one who can stop it. What better way to convey this hopeless situation than making a card-based rogue-like experience where the players have to battle their way through beasts and monsters, only to end up at the starting point and do it all over again?

After setting up a bare-bones camp, the hero sets off on an expedition to find out if someone or something has been spared from the lich’s curse. Expeditions take place on a looping course that is empty save for the starting camp tile and the enemy slimes that randomly appear after an in-game day. Encountering them triggers a battle, where the enemies and the hero trade blows automatically. Defeating monsters gives the player pieces of equipment to improve the hero’s stats, but also cards that act as memories of how the world once was that can be placed on the ground to varying effect. Biomes such as groves and swamps can be put on the road to increase the number and variety of enemies, which means better equipment and more cards. Rocks, mountains, and meadows are used to fill the black void that surrounds the looping track and affect the hero’s stats, such as their HP cap and the amount of health recovered every time the sun rises. Other cards have to be placed on the roadside and have an area of effect, such as lighthouses speeding up both the hero’s walking and attacking speed. If the hero isn’t defeated, they will end up back on the camp tile, where some of their HP will be restored to take on another lap around the track, facing even stronger beasts, or else stay at camp and rest. 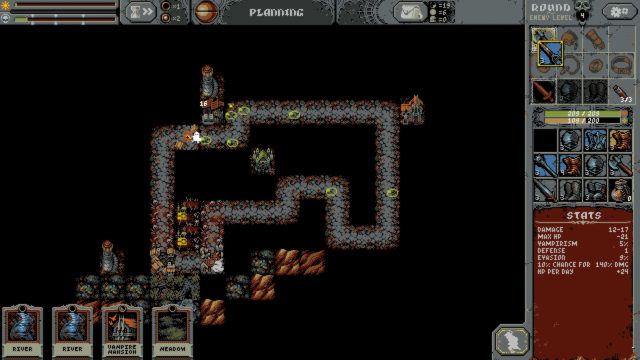 The randomly generated looping tracks start out empty, but will get busy pretty fast.

The camp acts as a haven for the survivors of the world’s erasure. It starts with just a campfire, but other facilities can be built using resources gathered while out on an expedition, the only thing that is retained after the hero returns to camp. A variety of quirky individuals will make their appearance as the player expands the camp, most of them offering their services to spice up the gameplay. A library will unlock the experience bar during expeditions, which awards the selection of a trait from a pool of three choices every time it is filled by killing enemies. The smithy will give the hero basic equipment at the start of each expedition, while the herbalist’s hut will unlock the use of potions when battles turn for the worst. Different buildings may also grant new types of cards and even unlock new classes for the hero. After managing the camp, the player can then embark on another expedition by selecting the chapter of the adventure, the cards that will be available during the expedition, and the hero’s class, all to gather more resources or attempt to defeat the chapter’s boss that will appear once enough cards are placed on the field.

While all these tools will prove to be useful during expeditions, the most effective weapon in the player’s arsenal is learning, in true rogue-like fashion. The enemies that appear from different terrain cards all feature unique characteristics: spiders, which spawn very fast and tend to quickly fill the tiles adjacent to their nest, don’t offer much in terms of items but may be useful for gathering more cards quickly; the cemetery’s skeletons are more resilient and deal more damage, but defeating them offers high-quality equipment; dogs aren’t that big of a threat but are able to move towards tiles that are adjacent to the grove they come out of. But enemies don’t come only from specific tiles: place too many rocks and mountains all around the map for example, and a goblin camp will make its appearance in a random roadside location, quickly spewing critters on nearby tiles. Too many creatures to face at the same time? A well-placed road lantern can help, since every surrounding tile will have a reduced maximum number of enemies it can hold, or they can be blasted with the “Oblivion” card, which erases any enemy or environment on the selected tile. The game, even with its randomized nature, makes sure that every menace has one or more countermeasures, it’s just a matter of figuring them out. 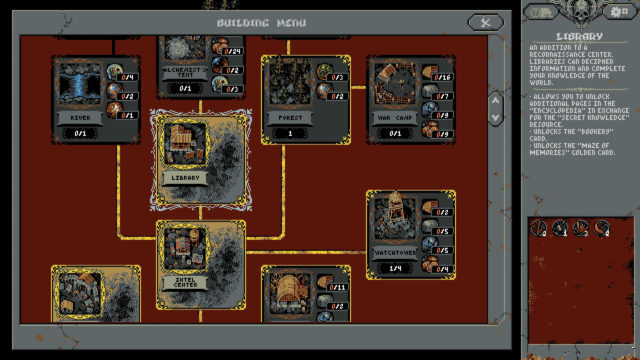 Camp building follows a tree structure, and each facility can be upgraded.

Discovering the synergies between cards, equipment, and traits is highly rewarding, and while many of these can be found by pure chance, the gam sometimes nudges the player towards them, not only using card descriptions but also during story sequences and dialogues. One example is the conversation with a vampire when the hero first meets this kind of enemy, where it is revealed that, before the world started to disappear, vampires used to own land and offer protection to their villages. Not only does this dialogue provide interesting tidbits of lore, but it also points to the possibility that something may happen when a village and a vampire mansion are placed next to each other. These discoveries always feel rewarding no matter their nature and open up even more strategic options.

This is taken to a whole new level thanks to the different selectable classes, which greatly alter the way expeditions play out. The warrior, for example, has a pretty basic approach: as enemies are defeated, cards and equipment are rewarded, and the bigger and meaner the enemy is, the higher the quality of dropped gear. The rogue, on the other hand, is different: while it still receives cards from slain monsters, equipment rewards are replaced by trophies, which can be brought back to the camp tile to be exchanged for a batch of equipment whose quality is based on the number of trophies accumulated. This changes the whole outlook on the number and type of enemies that should be faced while traversing the looping course, which in turn affects deck composition for a given expedition. By noting the results of experimentation, optimal card placement strategies can be devised and exploited to make each subsequent expedition easier and more fruitful. When things finally click, it’s extremely rewarding to see the little hero traversing the road over and over again with little to no problems, collecting resources and ever-improving gear, with everything working like a well-oiled machine. 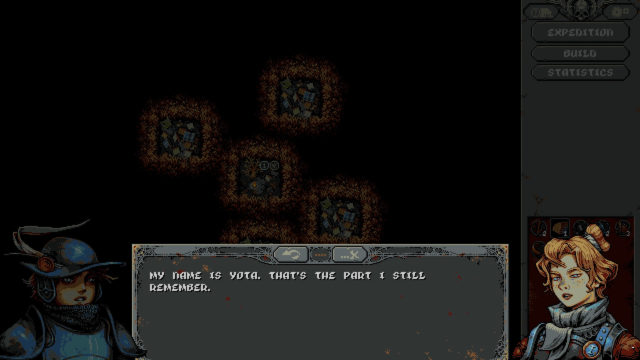 The character portraits are rendered in pixel art that is consistent with the game’s tone.

I didn’t expect to enjoy Loop Hero as much as I did, but it was most definitely a welcome surprise. It is way too easy to give in and take on just one more expedition to experiment with the cards and gather more resources. Fans of deck-building RPGs and rogue-likes should keep this original mixture of both genres on their radar, but I would encourage anyone willing to try something different to look at Loop Hero, which is slated for a 2021 PC release.