There’s huge enjoyment in puzzling out how to either create the best item possible or unlock the path to a brand new item.

I’ve largely been a passive follower of the Atelier series; I’ve played selected titles over the years but never fully dived into the series for extended runs. The opportunity to check out the PC version of the upcoming Atelier Ryza 2: Lost Legends & the Secret Fairy provided a welcome chance to see how far the series has progressed. It’s pleasing to report that while Atelier Ryza 2 keeps much what of made the series so appealing to many with a very likable cast and very satisfying synthesis system, like its predecessor it streamlines the right areas to make it a much more accessible title to others. In addition to this preview, RPGamer also has an interview with producer Junzo Hosoi, which can be read here.

Though it is a direct sequel to Atelier Ryza: Ever Darkness & the Secret Hideout — and the first time a series protagonist has reprised that role — Atelier Ryza 2 still feels welcoming to brand new players and absolutely works as a jumping-on point. It takes place three years after the events of the first game and sees alchemist Reisalin “Ryza” Stout moving to the capital city of Ashra-am-Baird at the suggestion of her friend Tao, who moved to the city himself to progress his studies. Thanks to Tao’s high-born tutee Patricia, Ryza is able to set up her own atelier in the city, using it as her base to go out on adventures with Tao and a mixture of new and returning allies as the group looks to uncover the secrets and the lost legends behind a set of ancient ruins.

Playing a major role in the group’s explorations and Ryza’s new life in the capital is a strange creature Ryza names Fi, who ends up as Ryza’s partner and has a deep connection to the ruins that pre-date known history. Each of the ruins has its own mystery behind it, which Ryza must uncover by finding and putting together spiritual clues unlocked by a special device she finds in the first ruin. The gathering of clues works well with the game’s exploration and gathering systems, as it encourages players to check out the entirety of each ruin, with plenty of resources to pick up as they go. Putting clues together is a simple matter of placing those clues into nodes indicated by key words rather than requiring any true thought, but the rewards make it feel like a worthwhile endeavour. 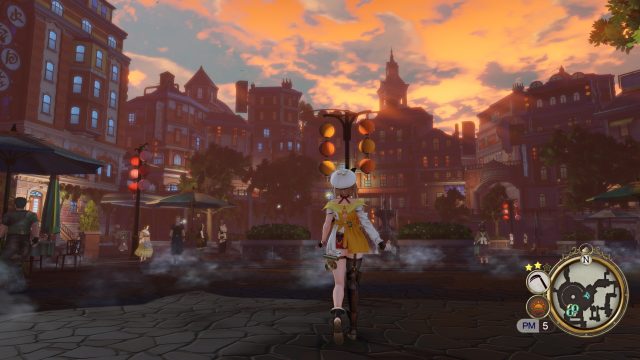 The overall story is pretty straightforward, and and the foreshadowing of what’s likely to come in the finale isn’t subtle, though there is a possibility that it will subvert expectations. The characters also don’t have a huge amount of depth to them and most can have their motivations and main characteristics summed up in a few sentences. Nevertheless, they are all very likable, especially Ryza herself with her continual enthusiasm, and the sheer pleasure of their company makes it very easy to overlook the lack of any real drama in their individual stories and event chains. Fi is an infectiously adorable creature, quickly establishing pleasing bonds with the cast.

The calendar and players needing to plan out their time to hit deadlines are a thing of the past for the series. Though some events suggest that Ryza does certain things as soon as she can, practically players are free to spend their time as they wish: collecting resources, exploring the ruins to advance the main story, crafting, viewing character events, and undertaking requests. Giving players freedom to progress in their own time is a definite boon for the series, and it’s good that it’s now a permanent fixture.

Atelier Ryza 2′s synthesis system is incredibly enjoyable to work with. Each recipe has a series of nodes and inputting the appropriate items into these unlocks new traits, bonuses, and access to other nodes. The system encourages experimentation and works a treat. It can be a bit easy to overlook how important using the crafting system to make different recipes is, but once this is made clear there’s a huge enjoyment in puzzling out how to either create the best item possible or unlock the path to a brand new item. Meanwhile, an automated system lets players create items swiftly and is very welcome for crafting the base ingredients for advanced recipes or for filling requests. 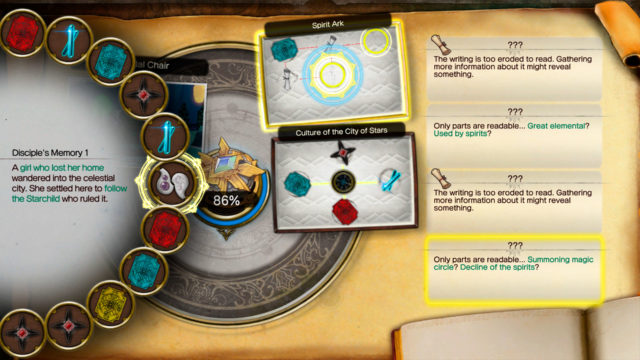 As Ryza finds clues, she can put together the legend behind the ruins and unlock recipes needed to progress.

Gathering is also highly enjoyable, with Ryza often having multiple ways of getting resources from gathering points using different tools, each resulting in different items. There are plenty of points scattered around and it’s nice and straightforward to fill up the basket with useful items. Ryza is able to swim as well as explore underwater in certain locations in the sequel, though this is more of a superficial addition than a significant change as the water-based gathering points act the same as regular ones.

Atelier Ryza 2 builds upon its predecessor’s switch from a strictly turn-based combat system to a real-time one. Players have three party members active during battle — with one in reserve who can swap in — and can freely change the roster outside of combat. Each combatant gets to act when their icon reaches the central point of the indicator in the bottom-right of the screen, whereby they can attack, attempt to flee, or use the items they have equipped. Players only control one member of the party directly, with the others controlled ably by the AI, but can switch at any time. Players can also press the defend button at any time, but this stops progress towards the next turn so is best used at the moment of an enemy attack.

As the party attacks, the player gains AP, which is used to unleash skills during attack combos. Players can also spend AP to use items before their turn if needed. However, item use also requires a sufficient amount of CC, which is gained by using skills, so there is always some resource management required, especially with the tougher boss fights. Each participant in battle has a break meter, and while it doesn’t come into play as often in regular encounters, it can be very important in tougher boss fights where a powerful charged attack can be avoided by filling the break meter and stunning the enemy. 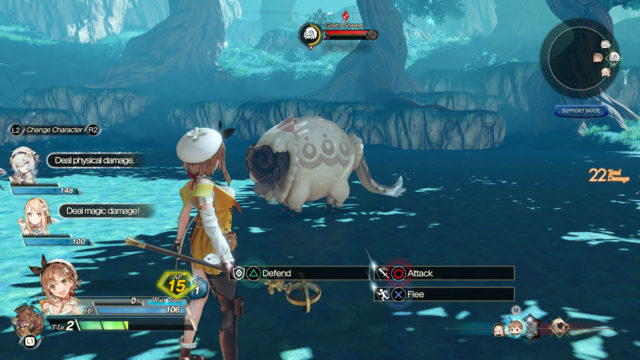 Combat is engaging but regular encounters get repetitive.

The combat system is entertaining and provides good levels of excitement and engagement. It works best on the tougher fights where players have to actively manage their AP and CC and consider more aspects like elemental weaknesses. Though the quick pace of combat is welcome, regular encounters get repetitive, largely due to the limited selection of enemies within each area, and many players will soon end up just skirting around them to save time. Fortunately, the game’s balance is generally friendly to players so there’s not too much concern about being underlevelled.

Atelier Ryza 2 looks the part and the current build runs nicely on PC as well. The city of Ashra-am-Baird feels sufficiently busy with plenty of impressive buildings and plazas. Other locations are vibrant and decently varied in theme, though some of the ruins feel like they rely on the theme a bit too much rather than providing much in the way of unique features. The game’s music features plenty of catchy, appropriately upbeat and folkish tracks, while the Japanese-only voice acting is all ably performed.

Atelier Ryza 2 spreads its arms wide with an immensely welcoming feeling. The game’s synthesis system is a delight to interact with and spending time with the characters is a very uplifting experience. The repetitiveness of regular encounters drags things down a little bit, and the story definitely isn’t the deepest around, but Atelier Ryza 2 is still a highly enjoyable title. Both fans of the series and potential newcomers will have plenty to be excited for when the game hits PC, PlayStation 4, and Nintendo Switch in January.

Disclosure: This article is based on a free preview version of the game provided by the publisher.