In this edition of the column we dabble in a bit of murder fun in the sun in Paradise Killer on Nintendo Switch.

If it wasn’t already abundantly clear from the eclectic cast of characters visible in the game’s logo, let’s just state the obvious right up front. Paradise Killer spells its particular brand of weirdness with a capital, bolded, and underlined W. So much so, in fact, that there were times early on during my playthrough where I felt almost physically rebuffed, unable to find an in to the utterly alien world and the story of its inhabitants. It wasn’t until some time had passed that things began to gel for me, and the admittedly intriguing concept of an open-world murder investigation mystery kept me glued to my Switch screen — the steady stream of collectibles I stumbled across for most of my playtime certainly helped. But Paradise Killer isn’t without some major hang-ups, resulting in a game that isn’t going to be for everybody.

The game’s premise is certainly highly appealing. Players take on the role of Lady Love Dies, an investigator and part of a group of immortal beings known as the Syndicate. For eons, the Syndicate’s members have used their powers to create a series of island paradises as places to entrap ordinary humans and use their psychic energy to resurrect their dead gods, moving on to a new island each time the current one falls to demonic invasion. Over thousands of years, the Syndicate has gone through 24 failed island sequences, and is on the verge of slaughtering its citizenry in order to move to island 25 — widely believed to finally be the perfect island sequence — and begin the process all over again. But on the eve before the transition can be completed, the Council, the ruling body of the Syndicate, is savagely slaughtered, with the accused perpetrator being a human possessed by a demon. Lady Love Dies, having been exiled by the Syndicate three million days ago, is called upon to return and lay bare the mystery of the murdered Council.

All of that is certainly a mouthful, and it’s a real shame that all of it is delivered to the player at once, front-loaded into a few lines of on-screen text before the game even gets going. Such a surreal setup ideally would require a bit of time to get acclimated to, but Paradise Killer delivers this dump truck of exposition prior to the first moment of gameplay. It then also asks its players to coalesce this with the narrative framework of two shadowy figures whispering snatches of sentences to each other, implying the entire story is somehow told as a flashback, and setting them loose on the open-world island that needs to be explored. It’s an awful lot to be presented with all at once, and it may just completely turn off a budding investigator before the case has even truly begun. 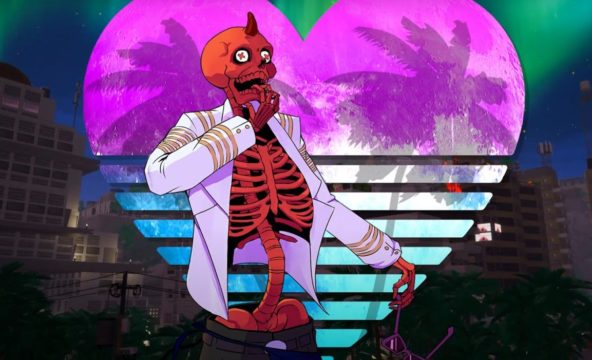 Yup, that’s weird. And that’s not even the half of it.

The “click” does occur, eventually, and when it does the player enters a nice sort of groove, helped in no small part by the constant stream of clues and relics sitting around the island waiting to be discovered — occasionally vital to the investigation, but usually just throwaway bits of flavor text. The island itself looks great, presented as a free-roaming three-dimensional space akin to a resort island, complete with beaches, docks, cliffside overlooks, high-rise apartment towers, a power station, nutrition farm, sewer system, and even a convenience store. It’s rife with hidden paths that connect locations to each other, and dotted all over with esoteric statues, obelisks, and other paraphernalia dedicated to the outlandish pantheon of deities worshipped in this universe.

But what really makes the island so alienating is its utter absence of any other life, safe for the handful of Syndicate members still around to assist with and be suspects in Lady Love Dies’ investigation. Here, again, the game leans full-bore into its weirdness, with some truly out-of-left-field character designs, with names that feel generated by pulling unrelated words out of a grab bag. Shinji is a multi-armed demon with pixelated middle fingers raised high and genitals covered by a censorship sticker; Crimson Acid sports a woman’s body attached to a goat’s head; Sam is a horned red skeleton who tends bar. The eclectic cast contains such names as Doctor Doom Jazz, The Witness to the End, Grand Marshal Akiko 14, K. HX, Henry Division, Damned Harmony, Crying Grudge, and The Silent Goat. It’s a lot to take in, and the nature of an open-world game just doesn’t do it any justice as characters and plot points are introduced as players discover them, if at all.

Lady Love Dies’ investigation will take her all around the island, criss-crossing it on a hunt for clues and to interrogate witnesses. To truly follow up on all leads, almost constant backtracking is required, as every suspect remains in one stationary location, and each time Love Dies finds a new nugget of information, a follow-up conversation may be necessary. There is a fast-travel system, but it requires spending Blood Crystals, another collectible that’s also needed to purchase some movement upgrades like double jump, effectively discouraging an overuse of the fast-travel system. The island is large, and is designed in such a way that, if you can see it, you can visit it. 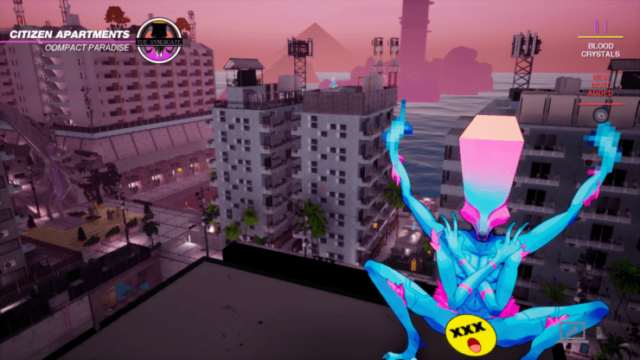 See that rooftop/island/pyramid? You can go there.

As cool as the open-world investigation concept is, it does come with a very real danger of breaking the game’s pacing. In my playthrough, I opted for going off the beaten path the early narrative was pushing me towards, failing to immediately inspect the crime scene upon my arrival. This wasn’t intentional, but rather a result of not knowing the island’s layout yet and taking a wrong turn that basically resulted in my visiting every other location and suspect before ever setting foot in the crime scene, in turn leading to a very dull first few hours of aimless walking around without the narrative seeming to budge forward an inch. Eventually, picking up clues and interviewing suspects uncovers new aspects of the crime that must be investigated; it’s not a simple whodunnit, but also how, when, who helped, and so on. Thorough detective work even opens up a few ancillary mysteries, seemingly unconnected to Love Dies’ main case, and her notebook is filled in with motives and alibis for individual Syndicate members as she unearths them.

Following up on leads or looking into the validity of testimonies leads to some interesting narrative moments, including uncovering Love Dies’ past relationships with the other Syndicate members. But in terms of gameplay, there isn’t much there apart from walking and keeping one’s eyes peeled for collectibles. Interrogations are purely dependent on clicking through text and nothing here requires actual deduction. The handful of crime scenes Love Dies comes across are disappointing static screens with a handful of clickable points of interest in plain sight, each providing a tidbit of info, nothing more. Using Love Dies’ laptop Stardust to hack into a terminal or open a door are nearly the only puzzles, asking players to match a shape by recreating it via matching hieroglyph pieces.

Paradise Killer‘s non-linearity extends to its endgame, in a scene that may be its biggest letdown. Judge, the island’s arbiter of fates, makes it clear right from the beginning that LD can return to her at any time to begin the final trial — the investigation’s point of no return. At that point, a linear sequence ensues during which Love Dies presents each piece of evidence she has collected up to that point for each aspect of the case. The outcome, and who is executed as a result, depends very much on the evidence collected — as Judge puts it, LD must simply present “a truth” to her, even if that truth isn’t actually true. After potentially hours and hours of investigating, it’s quite possible to convict the wrong suspects. The game doesn’t even clue the player in on what, if any, errors were made during this trial. There is no refuting of statements, no timely presenting of evidence; it’s just a list of evidence to go through and present one by one, each with some text boxes to click through, then deciding who the guilty party is. In my playthrough, having gathered almost all available clues, I condemned nearly the entire Syndicate, save one or two members, to instant death by execution, each for a different aspect of the crime, even when my evidence didn’t clearly condemn them. The game gives no indication whether the case, or even individual aspects, were solved correctly and whether it was completely botched, with innocents unfairly condemned. 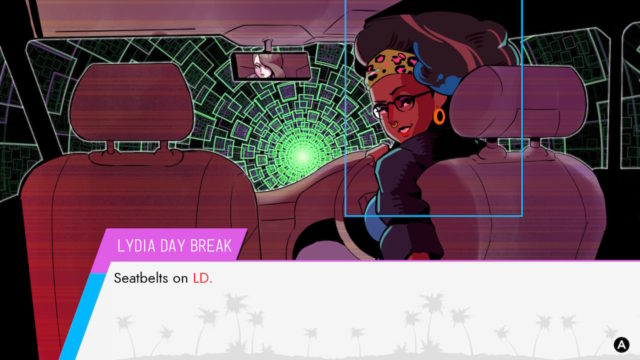 The person chauffeuring others through a dimensional vortex to the next island is perhaps the most normal being you’ll meet in the entire game.

The game does look and sound good, with the aforementioned island and character designs. The music, like almost every other design element, is well done but far more enjoyable for those who want something odd and quirky. The soundtrack at times recreates the feeling of a tropical island resort, but also includes off-the-wall selections like jazzy elevator music. The voice acting is quite limited, of the “four-or-five spoken phrases per character on repeat” variety. Characters present in the gameworld exist only as flat 2D models that rotate on their axis as Love Dies strafes around them.

Even after having completed the game, it’s hard to know exactly what to make of Paradise Killer. The concept of an open-world murder mystery is very intriguing, and the world offers enough piecemeal rewards to spur on thorough exploration. But the flip-side of that same coin is the potential to severely hamstring the pacing of the already difficult-to-navigate narrative. Though the majority of the game is an overall positive experience, it’s the initial hump and final trial section that stand out as problematic.