Perhaps I had too much of an expectation for this DLC given how much I adored The Outer Worlds.

Although I was a huge fan of The Outer Worlds when it released last year, there was one element of the game that truly bugged me: the solar system of Halcyon seems vast, yet the game only offered a tiny handful of planets to visit. I should have known, of course, that DLC would be on the way, but after completing the game, I was not sure what more could be added that would be as engaging as the main storyline.

It is imperative interested players will need a save prior to the point of no return (ADA receiving a radio transmission from the Halcyon Postal Service) and after the Radio Free Monarch questline. Any saves prior to or past this will not be able to enjoy the new content. Peril on Gorgon moves in tandem with the main storyline, so having a completed save file will not help, and is only accessible after the questline “Radio Free Monarch” while a player is able to fly to any planet of their choice. Once ADA receives a radio transmission from the Halcyon Postal Service, you’ll begin this strange questline.

Peril on Gorgon is all about a family’s rise to fame and subsequent fall. Players meet Minnie Ambrose, a recluse who tasks the crew of the Unreliable to find the journal of famed scientist Olivia Ambrose, who also happens to be her mother. Minnie explains that this journal is the most valuable item in the galaxy, as it will allow her to change the world. Upon taking on the request, the protagonist comes to realize that the Gorgon Asteroid is the site of one of the biggest scientific failures in the galaxy. There is a mystery afoot, and every piece of information is an uncomfortable detail. 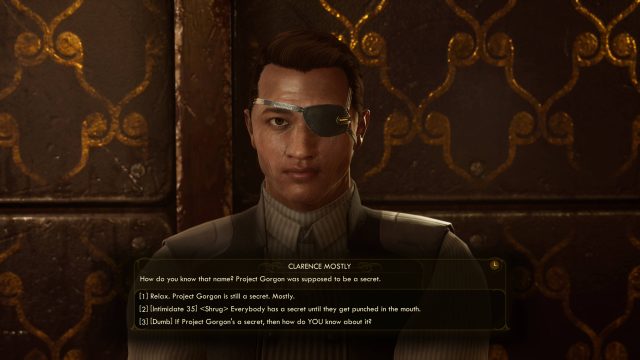 The story in Peril on Gorgon is mostly a fun ride, with plenty of he-said-she-said and tons of corporate and political intrigue, and it reminds players that sometimes trying to uncover the truth is messy at best. In true Obsidian fashion, many of these characters have moral grey that must be worked through, and given most people encountered are corporate scum, it often means having to make some shady deals for people who are 99.9% useless.

One of the issues I encountered in Perils of Gorgon was being offered skill checks, where if successful, nothing happens. As part of the expansion’s questline, players must seek out a loser who has valuable information, previously being part of Project Gorgon. Yet despite passing two high intimidation checks, my character was still required to collect a stupid trophy. Skills feel devalued when using them doesn’t result in some benefit, such as skipping dialogue or a tedious fetch quest.

Unfortunately, while the mystery of Gorgon is interesting, there are too many missed opportunities to have developed more story-wise, especially given what Minnie wants from the player. Sidequests don’t feel memorable, one is simply glitchy, and the main story of the DLC is rigidly linear; with only one meaningful choice, things wrap up far too neatly. Choosing one side or the other feels particularly hollow when at the end the sole reward is some cash or some kudos, and makes me wonder why I invested six hours into this at all.

Regardless of the awkward holes and miss opportunities, Peril on Gorgon still has a lot of fantastic writing and fun characters. The mystery and the build up to the end are great, but it is such a shame that the payoff in the conclusion and most of the sidequests fail to hit the mark so badly. Perhaps I had too much of an expectation for this DLC given how much I adored The Outer Worlds, but given how sharply this story starts, it’s hard to give the full package glowing praise.