Gearing up with hardware or hacking instead of attacking is possible in the cyberpunk world of Jack Move.

During PAX Online, So Romantic and HypeTrain Digital released a one-hour demo of Jack Move, a sci-fi RPG that takes place in a technologically advanced world. Based on retro pixel visuals, the game adds a cyberpunk touch to initialize players into an alternate reality. It won’t be surprising if many lovers of classic or high-tech RPGs feel tempted to add Jack Move to their software list and execute it when the full game becomes available on PC and Nintendo Switch in 2021. 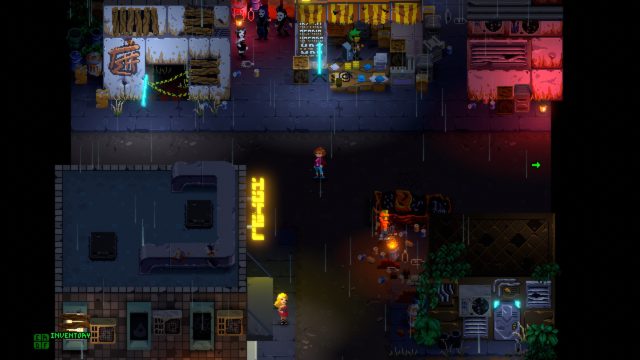 An abandoned city with sketchy people is where Noa lives.

The player controls Noa, a vigilante hacker who lives in a cybernetic reality, in her mission to rescue her dad who has been kidnapped by a powerful organization. Doctor Solares, Noa’s father, is a brilliant scientist who has conducted unique research regarding a secret yet to be discovered. With the assistance of a remote companion called Ryder, Noa travels through the slums to reach home and gather information. However, the streets are not a safe place because punks, killing machines, and other unfriendly creatures roam every corner. This premise seems like a great starting point for an inviting journey into a mechanical world.

Several traditional RPG staples can be found in Jack Move, such as turn-based battles and a leveling system, yet the game gives them a cybernetic twist that makes these staples refreshing. Having a promising story and some well-known aspects, the game tempts players to insert themselves and find out what else awaits inside Noa’s world. 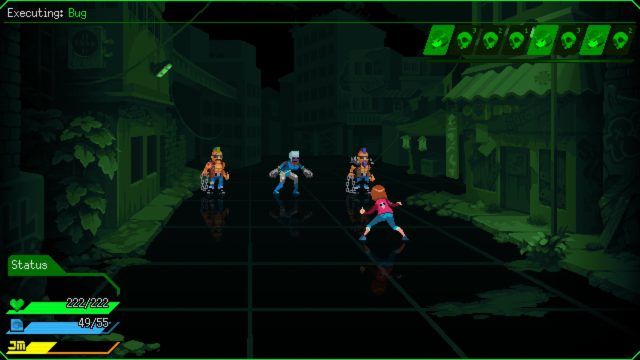 Noa hacks the punks she finds in turn-based battles.

Not only the soundscape and the visual art are tailor-made for Jack Move, but every detail was planned carefully to create an immersive experience. To be consistent with the highly advanced reality, Jack Move avoids classic terminology; for instance, Noa doesn’t attack, she hacks, and players will not venture into castles or ruins to find legendary swords, but find chips and other hardware enhancements in technological cities to gear up. Instead of magic, Noa has a different set of abilities, such as bugs, short circuits, and memory leaks. Patches, programs that occupy a certain amount of RAM, and hardware instalments are the kind of stuff that she needs to face every challenge. The stat names appropriately follow this theme, such as Data replacing MP.

Jack Move definitely made a good impression in my classic-RPG-trained mind. If I had to name the distinctive feature that emanates from this little glimpse of the game, it would be its verisimilitude, a quality that usually retains players until the end of the story. Players, such as myself, who want to play a brand-new RPG with a turn-based battle system should give Jack Move a chance.