The extreme challenge and level of mastery needed will truly give masochistic players a thrill, but may prove too daunting for others.

There are a number of ways for an upcoming game to grab my attention, and there are certain characteristics I find myself gravitating more and more toward. Fallen Flag Studio’s upcoming Eldest Souls effortlessly ticks all the boxes; a fast-paced, tough-as-nails boss rush action RPG with a deep and customizable combat system and gorgeous pixel art is a game I’ll sign up for in an instant, and with a playable demo available courtesy of PAX Online, that is precisely what happened.

As the demo opens, a lot of heavy stuff has already gone down, and the player is filled in via a few brief lines of text. The Old Gods have been imprisoned, and the Crusade sent to exterminate them never returned. A lone warrior has now been sent in to follow in the Crusade’s footsteps and finish what they started: exterminate the Old Gods once and for all.

Arriving at a dilapidated wooden dock via skiff, the demo’s first few moments teach the player the basics of combat — normal attack, charge attack, dash — by having them clear a path through the detritus obstructing the path ahead. At this early stage, the pixel-art graphics already look gorgeous, while the moody music channels a Kilar-esque staccato rhythm as it punctuates your struggles in battle. As one would expect, there is a stamina bar, though it may come as a surprise that swinging the giant sword you’re carrying — easily as tall as you — does not deplete this gauge whatsoever. Performing a dash, however, uses up one of the stamina bar’s three segments, which recharge at a rather slower rate than many will be used to. 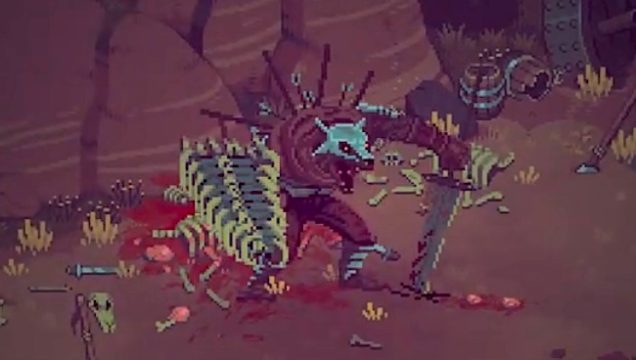 As fearful as he looks, The Watchdog is a tame battle compared to what lies ahead.

Having learned the basics, it only takes moments to encounter the demo’s first boss: The Watchdog, a hulking canine brute armed with a large sword and shield. Despite only having the most basic of attacks available, it doesn’t take long to learn The Watchdog’s attack patterns and dispatch him, though a convenient checkpoint system puts you right back into the battle after only a second or two after dying. Felling the beast, a simple task compared to what’s to come, nets you your first Talent Point, which lets you unlock one of three combat styles available to use from here on out. Even better is the fact that you’re encouraged to experiment with all three styles, as assigned Talent Points can be reallocated with the simple press of a button.

It is important to find a style that suits you, because life is about to become a whole lot more challenging. After a short few moments of forging ahead, picking up a couple of items, and perhaps finding an NPC or two to interact with, it’s on to the next boss. With some more experience under your belt and the first stage of a fighting style to assist you, it’s time to face The Guardian, an armored knight wielding a halberd with a fearfully long reach. Perhaps it’s just the demo, but boss health pools are massive, requiring slow and patient whittling away at their health bars. By contrast, it only takes two to three direct hits to down you. Some early combat abilities have built-in health restoration by dealing damage, but the risk-reward balance is so precarious that it isn’t much of a life-saver this early on.

The Guardian is a fierce opponent with many varied attacks, and even bringing his health to the halfway point — at which time he changes forms and presents a whole new challenge — is a victory in and of itself. Emerging victorious after many, many retries, I earned another Talent Point to expand my fighting style, as well as my first boss shard, which grants a new traversal ability or can also be used to provide a host of additional functions by infusing it with various other abilities. The full scope of options to fine-tune combat skills to your liking available in the final game is impressively vast. But even this additional boon proved insufficient for me to take down my next opponent: Azikel, God of Light. The demo’s third boss floats and teleports around the room, attacking both with physical attacks as well as large AoE attacks that add devilishly difficult movement and timing to the combat mix, forcing you to become not only a skilled attacker but an expert at dodging. On my best run I was still well shy of the halfway mark on his health meter, and so my demo eventually ended here.

Playing Eldest Souls‘ demo both greatly stoked my already-piqued interest in it and cautioned me about what I will be getting into. The extreme challenge and level of mastery needed here — assuming the final game will be similar to the demo in that regard — will truly give masochistic players a thrill, but may prove too daunting for others. I’ll certainly be keeping my eyes peeled for more announcements leading up to the game’s planned release later this year.