Looking Back at Baldur’s Gate

The year was 1998. My favourite Dutch gaming magazine just released their newest issue and it was time for me to digest everything they had written on these glossy pages. Flipping from page to page, I stumbled upon a multipage review. Now for those who did not experience the pre-internet era of video game journalism, having a multiple page review of a game meant something great in those days. It almost felt like they were going to discuss a title that would change the way we look at video games forever. In this case, for me it did. I still remember the first words of the review. “Welcome to Baldur’s Gate.”

My first time with Baldur’s Gate was in early 1999. My local library used to rent out video games and that is where I stumbled upon the game in its big-box glory, containing five discs of adventuring and an incredibly heavy manual. After checking out the game for a rental period of three weeks I got home, installed it on my computer, and with much eagerness I clicked the New Game button. Ready to start my adventure. A character creation screen opened and I became overwhelmed with all these options. In my head a lot of new questions started to pop up. What is a THAC0? What is the difference between a dual-class and a multi-class character? And many more. Then I remembered that this game is based on the Advanced Dungeons & Dragons 2nd edition rules. So for once in my life I had to read the manual. 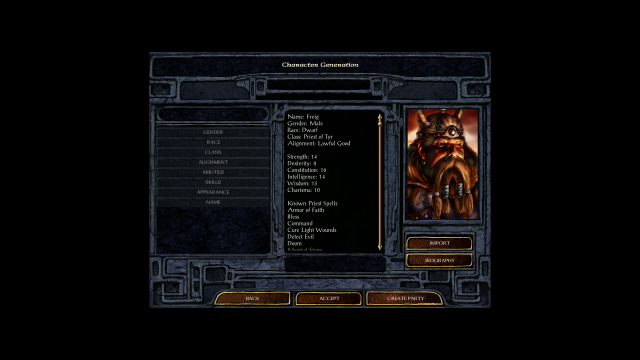 Character creation is quite the task in Baldur’s Gate.

When you are unfamiliar with the ruleset, it can be quite a daunting learning curve, but when you finally get a grasp on the basics, you will find yourself in a whole new world. But I do have to make a confession. I was never impressed by the graphics of the game. Even in 1998 it felt outdated, but it was very effective. The asymmetrical view gave a great overview of the cities you visited and the great character portraits of you and your travel companions gave a lot of personality to the otherwise generic figures that roamed over the screen.

Baldur’s Gate is the first role-playing game BioWare ever created. And it is quite an achievement, especially if you consider the scale of the game. And I believe part of that success is due to BioWare finding a strong formula for combat in this game. A formula that it has used again and again over the years. The combat looks to display the flow of real time combat, with allowing players to perform actions as they want, but also giving the option to pause the game, take a step back, and really think about the next action. The tactical pause mechanic echoes throughout the history of BioWare, all the way to the Dragon Age games. 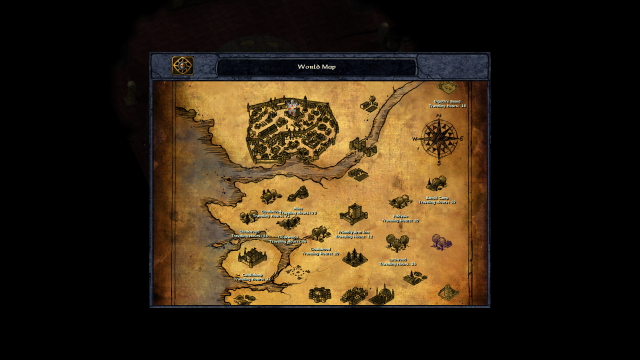 Explore the Sword Coast and discover the secrets of Baldur’s Gate.

Baldur’s Gate offers a great sense of exploration from the get-go. After leaving the starting area, you go wherever you want to. The Sword Coast is yours to explore. You can go south, towards Bereghost and Nashkal. Or maybe you would rather see what is up north, towards the Friendly Arm Inn. Everywhere you go, the music follows you. From a bashful lute tune in the local inn to a heavy orchestrated battle music while you take care of the local Hobgoblins. I still get chills when I hear the music from this game and it feels like I am ready to go on an adventure.

During the adventure you will meet up with other companions. Just like real life, some are nice and some are… not so nice, and this broad spectrum of characters and options is for me where the game truly shines. It is up to you if you want to play the hero or if you want to be the villain, and those choices you make during quests are reflected through the reputation system. If you are a goody two-shoes and like to help everyone around you, don’t be surprised if one of your more evil aligned party members decides to leave. Or even start to attack your party. So be careful who you pick up on your travels. 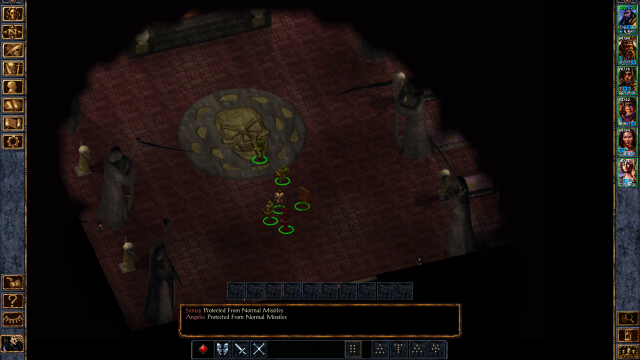 This party is ready for a bit of a rough and tumble.

Is it worth it going back to Baldur’s Gate? Absolutely. Even though the game is over twenty years old now, for me this still feels as the closest I have ever gotten to a single-player Dungeons and Dragons session. It paved the way for PlaneScape, Icewind Dale, Neverwinter Nights, and many more classics. For every computer role-playing game lover out there, go and pick up Baldur’s Gate and experience the roots of BioWare. But after all these years I still have one question: Will we ever trully understand THAC0?