Overall, Trails of Cold Steel III remains an excellent game, despite the technical limitations of the port.

Originally released last year on the PlayStation 4, fans who wanted to experience The Legend of Heroes: Trails of Cold Steel III on either PC or Switch had to wait up to eight months longer to sink their teeth into the next beefy adventure in the lauded series. Ultimately, those who chose portability over an earlier opportunity to play will find that choice confirmed as the correct one, and the previous 5/5 review for the PlayStation 4 version is well deserved.

Trails of Cold Steel III adjusts the pacing in comparison to the first two games in multiple ways. Outside of combat, the story focuses on fewer but larger locations. Being developed solely for consoles, it takes a step up in graphical fidelity from the previous titles that were held back by supporting the PlayStation Vita.  Trails of Cold Steel III retains the same overall gameplay mechanics, but brings some fresh ones.  In battle, each enemy now has a Break Gauge, which adds a new twist to combat strategies — depleting this bar puts enemies in a Break state, which not only eliminates all of their buffs, but also boosts the damage done to them.  Enemies in a Break state are further delayed in acting with successive attack, allowing players to lay down serious damage. Further enhancing the party’s power are Brave Orders, which can provide vital buffs or protection that can turn the tide of battle. 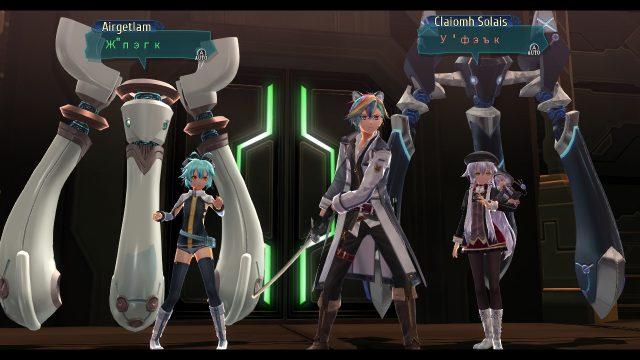 New and returning characters mingle in a rotating cast of allies.

For the aurally inclined, Falcom Sound Team jdk once again delivers a masterful soundtrack, and while an additional combat theme or victory fanfare would have been appreciated, those present never wear out their welcomes.  Haunting tunes underlie major story reveals, while heart-pounding melodies play during times of heightened activity and show that Falcom’s understanding of setting a scene remains razor sharp.  The game’s voice acting is top notch, with nearly all of the original Class VII returning to reprise their roles in the new title.  It’s exciting to see the returning characters and understand how they’ve changed in the nearly two years since the end of the second game.  For those jumping into Trails of Cold Steel III as their first title in the series, there are useful introductions to important from the Trails in the Sky and Crossbell sub-series.  Newcomers can also consult the “Backstory” option in the main menu to get an overview of the plot and characters from the first two Cold Steel titles.  Arriving fresh or being experienced with the other titles are both valid states in which to come into the game, and Trails of Cold Steel III does as good a job as possible at ensuring neither is inherently superior.

All versions of Trails of Cold Steel III are identical in content, story, presentation, and gameplay, but there are some technical differences.  It is true that the Switch version has a slightly lower resolution and frame rate, particularly in handheld mode.  That being said, the graphics absolutely hold up on the Nintendo hybrid system, taking advantage of the platform’s strengths rather than attempting to reach graphical parity.  As the game can easily take upwards of 100 hours to complete, looking good in both handheld and docked mode is important and the port certainly pulls it off. 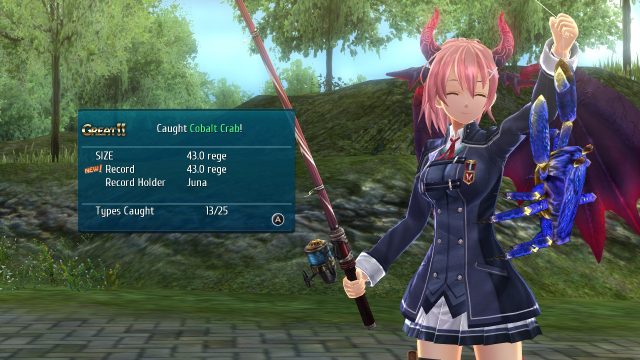 Mini-games like cooking and fishing break up combat and quest-centric gameplay.

The Switch version of Trails of Cold Steel III does suffer from some issues.  Crashing and soft locks can occur, most notably during chapter two’s Crossbell story arc. Using the Switch’s burn-in reduction as well as plugging in controllers during very specific circumstances can also cause the occasional crash, though the average player is unlikely to line up the necessary combination of factors to see many of these, with the exception of Alisa’s attacks, which cause the game to lag slightly.

There is a patch arriving the day after its June 29 launch, which will resolve at least some of these issues, though NIS America has not specified the precise fixes included or what may be coming further down the line. I had a ton of fun with Trails of Cold Steel III and the time I played it practically flew by.  It was easy to sit down and expect to just to play thirty minutes, before suddenly realizing hours had passed.  It’s a great combination of combat, questing, story development, and mini-games that is packed with charm.  Now comes the tough decision for many of attempting to be patient enough for the Switch or PC versions of Trails of Cold Steel IV in 2021, or to scoop up the PS4 version when it arrives on October 27, 2020.