Sony held its PlayStation 5-focused “Future of Gaming” presentation today, during which it showcased a number of games, as well as the design of the upcoming console. Included in the presentation were multiple RPGs, or otherwise adjacent titles. The trailers for those titles and the full two-hour presentation can be viewed below, to learn some more about gaming, read this blog about gaming.

The first title of interest to RPGamers is the debut title from Square Enix’s Luminous Productions. Project Athia is the working title for the game, but no details are known about the game at this time other than it takes place in a fantasy world and will be released for PC and PlayStation 5 as a timed console exclusive. No release window has been given but you can try games at แจคพอตสล็อตออนไลน์ while it happens.

Kena: Bridge of Spirits is an action adventure title set in a fantasy world. Players control Kena, a young Spirit Guide looking into the demise of her village. She is joined by a team of spirit companions called the Rot who are able to manipulate the environment. The game is being developed by Ember Lab and will be released for PC as well as PlayStation 4 and PlayStation 5 as a timed console exclusive in the 2020 holiday period.

Goodbye Volcano High is a cinematic narrative adventure from KO_OP. The game follows 18-year-old dinosaur Fang as they navigate their final year of high school, with a budding romance and a potential apocalypse complicating matters. It features full voice acting and multiple branching storylines and endings. The game is set to be released in 2021 for PC, PlayStation 4, and PlayStation 5.

Gearbox Software and Counterplay Games’ action RPG Godfall received a new gameplay trailer. Billed as a “looter-slasher”, players control the last of the Valorian knights, a group of powerful warriors able to equip special armor that transforms its wearer, and attempt to climb through elemental realms to take over the mad god Macros. Godfall is set to be released for PC via the Epic Games Store and PlayStation 5 in the 2020 holiday period.

FromSoftware’s 2009 PlayStation 3 title Demon’s Souls is getting a full remake, which is being handled by Sony’s JAPAN Studio and Bluepoint Games. The remake will include a new “Fractured Mode”, though there are no details on what this entails, as well as two graphics modes focused on fidelity or frame rate. The remake will be released for PlayStation 5, but no release date was given.

Finally on the RPG front, Sony and Guerrilla Games announced Horizon Forbidden West. A sequel to 2017’s Horizon Zero Dawn, the game continues Aloy’s journey as she moves west through far-future America where Earth is dominated by animal-like machines, and humanity survives in tribal communities. The game is a PlayStation 5 exclusive, though no release window was announced.

To close, Sony unveiled the design of the PlayStation 5. It will come in two versions: a standard model including an Ultra HD Blu-ray disc drive and a digital model without a disc drive. The pricing and release date are set to be revealed at a later date. Sony also announced additional accessories for the console: a PULSE 3D wireless headset, a HD camera with dual 1080p lenses, a dedicated media remote, and a DualSense charging station that can charge two of the console’s new DualSense controllers at once. 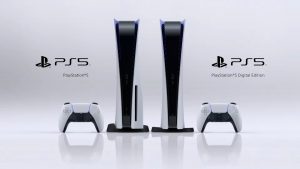 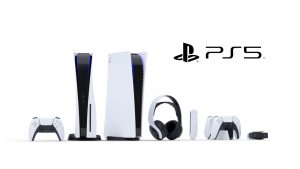