As its name suggests, Assassin’s Creed Valhalla is set during the Viking Age in the ninth century CE, and puts players in control of the Viking warrior Eivor, who can be male or female. The game features an open world complete with sailing as players lead raids on England after escaping the harsh conditions in Norway. Players will be able to shift the balance of power by dealing with various factions and will also be able to grow their home settlement, adding and upgrading buildings and facilities while the inhabitants build relationships.

Assassin’s Creed Valhalla will launch for PC, PlayStation 4, PlayStation 5, Xbox One, Xbox Series X, and Google Stadia during the 2020 holiday period. The game will come with three digital editions: a standard edition; a Gold Edition, which also includes the Season Pass for DLC that is yet to be announced; and an Ultimate Edition, which includes the Season Pass and a set of in-game items. There will also be a physical Collector’s Edition (as well as a standard edition). The Collector’s Edition includes a copy of the game plus the Ultimate Edition content, a 30cm-tall statue of the female version of Eivor, a collector’s box, a SteelBook case, a set of three lithographs, a soundtrack selection CD, and a certificate of authenticity. 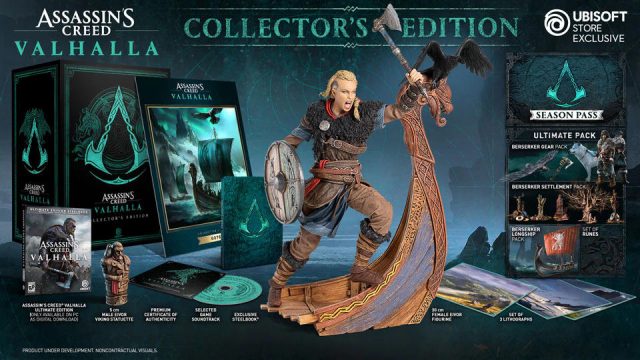