Limited Run Games announced that it is partnering with Larian Studios to release a physical Nintendo Switch edition of Divinity: Original Sin II. The edition will be available to order for four weeks from 10am Eastern on December 6, 2019, and will include all of the game’s current language options on the cart. Like the digital Nintendo Switch version, the physical version will let players transfer their save file back and forth with the PC version.

Divinity: Original Sin II is a distant sequel to 2014’s Divinity: Original Sin, with both games being funded through Kickstarter. Original Sin II puts players in the role of a Sourcerer on a quest to become the next Divinity after the gods have abandoned the land of Rivellon. The game was originally released for PC in 2017, with PlayStation 4 and Xbox One versions released in 2018, and Mac and Nintendo Switch versions released in 2019. Those looking to read more about the game can check out RPGamer’s review of the PC release. 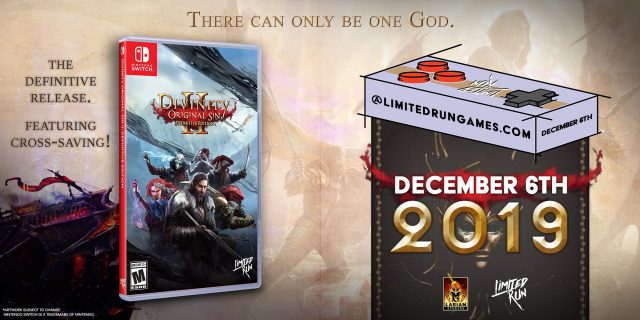