One important lesson was quickly learned in Destiny Connect: Isaac must stay alive.

The town of Clocknee was ready to ring in the new millennium on December 31st, 1999, when all of a sudden, time stopped and electronics came alive, infected with crazy viruses!  It’s up to the few not frozen by this bizarre phenomenon to figure out what the heck is going on in Destiny Connect: Tick-Tock Travelers.  While on the surface the game may look like a poster for “my first JRPG adventure,” it has more depth than expected, while still being newbie friendly.

The demo opened up about 15 minutes into the story, where Sherry is gathering information about a recent accident on the east side of town.  Making her way over, she’s attacked unexpectedly by…possesed televisions?  Lucky for her, a mysterious boy (later confirmed to be Altana) saves her from the electronic monsters.  It leaves the player with a lot of questions, which will surely be answered by playing the game in the normal order. 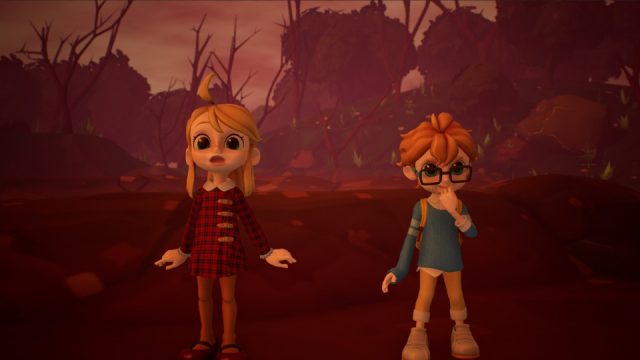 From there, the demo jumped to a much later part of the game — about 7 or 8 hours into the story.  Sherry, Pegreo, and their time-travel-enabling robot Isaac have returned to Clocknee in 1970 for reasons kept a little vague to not spoil the story.  While there, the trio was able to run around, discover treasure, and jump into combat.  One important lesson was quickly learned in Destiny Connect: Isaac must stay alive.  If the over-sized robot is defeated during combat, it’s a game over and players can choose whether to restart the battle, or return to a previous save point.

With a bit of coaching, a simple but effective combat strategy soon emerged: Isaac would guard the two children, using a skill to reduce the amount of damage he took, while Pegreo set up traps for the enemy and Sherry either triggered the traps or healed the party, whichever was most urgent.  While this wasn’t the only way to overcome these particular foes, seeing the characters easily synergize together made combat smooth and quick, letting the player get back to exploring the colourful world they’d been dropped into. 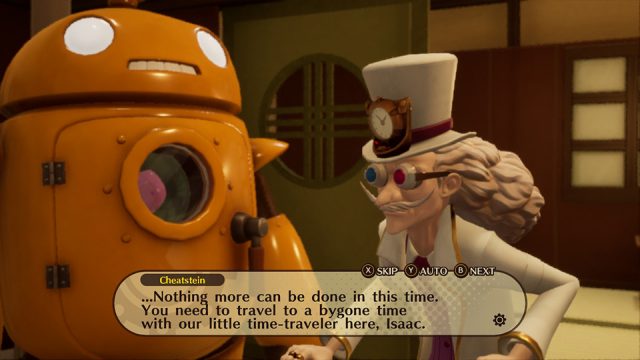 Though not shown during the demo, the game also includes customizations for Isaac, completely changing his class and role via gears, as well as crafting and light puzzle elements.  Exactly why the party is time traveling or what they hope to accomplish in the past, present, and future hasn’t been entirely revealed yet, but players won’t need to wait long to dive into the time-bending world of Destiny Connect: Tick-Tock Travelers, as it arrives October 22 in North America and October 25 in Europe, on both PlayStation 4 and Nintendo Switch.  A Collector’s Edition for both consoles is also available on the NIS America Store.