River City Girls is a brawler RPG spin-off to the Kunio-kun series and stars Misako and Ryoko, who this time get to be the ones to rescue their boyfriends Kunio and Riki. The game is set to be released digitally on PC, PlayStation 4, Xbox One, and Nintendo Switch on September 5, 2019. 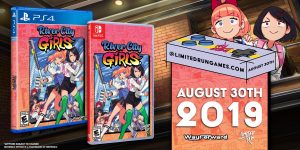