Swag and Sorcery bills itself as an idle RPG and city-building game. While there is truth in that advertised blending of genres, the ingredients offered don’t combine into a palatable recipe for success.

Having drooled over the beautiful sprite work done by Lazy Bear Games in its 2018 release, Graveyard Keeper, I recently decided to give their newest title, Swag and Sorcery, a project co-developed with Uroboros Games, a try. The game is advertised as a tycoon game mixed with a streamlined RPG which means I expected some city building and light RPG moments. City building has been an exciting genre for me since the days of the original SimCity, and a lighter RPG experience called to me as I sought a break from my huge backlog of fifty-hour RPGs.

The story of Swag and Sorcery is simple if not silly and ridiculous: there are problems in the kingdom, and while the stylish king checks out his reflection in the mirror, he decides the best thing to do is procure his great-great-grandfather’s magic costume. Players are tasked with building a city and recruiting heroes to find said costume. That’s about the extent of the story within the first half-dozen or so hours played for this deep look. There is an evil adviser working against the king and a snarky cat that interacts with the narrator, but other than that, the focus of the game is on the gameplay. 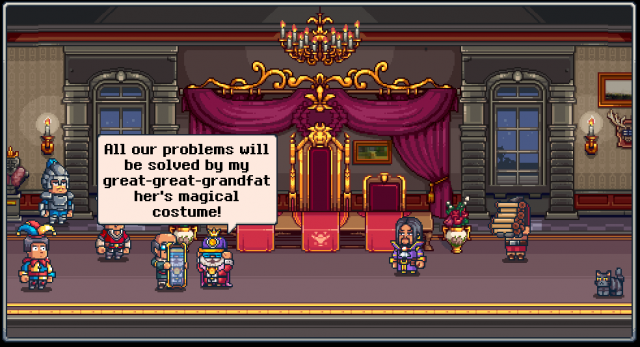 The ridiculously over-swagged king sets the game into motion while checking himself out in a mirror.

With the title of Swag and Sorcery and a self-described genre blend of city building and streamlined RPG, there are four main gameplay elements the game looks to utilize: a wide variety of fun equippable items, magic, city building, and a lite RPG experience. Unfortunately, there are issues with each of these four elements.

First, the game is nowhere near the streamlined RPG it bills itself to be. While the game insists that heroes can be created and sent out on missions without player oversight, going so far as to place a large icon in the adventuring window front and center to return to the city and work there as missions progress, this is a good way to lose an entire party and gain no crafting materials or money. Players must recruit heroes, spend a great deal of time equipping them with up to six items, and carefully follow them on their somewhat independent missions. The game does not allow for inputting of commands; rather, the heroes proceed through missions walking from left to right and randomly encountering resources and battling monsters for a set amount of spaces. Players have the option of retreating at any time, which is how a good portion of missions end with so that resources can be brought back to create better equipment or upgrade the town. If the heroes complete the mission, a few percentage points towards the completion of that area are earned and after that bar reaches 100%, bosses are encountered. With only a few percentage points given per successful mission and points lost upon retreat or defeat, dozens of missions are required to complete each area, and this is where the grinding of Swag and Sorcery begins.

The grinding continues as the game progresses and the ability for players to cast spells to help their heroes in battle opens up. New spells can be researched and players happily begin to feel as though they now have more say in what takes place during mission battles. Sadly, that’s not the case without a lot of grinding. Each spell requires a great deal of mana to cast, meaning that on average players can expect to cast spells only once or twice per mission. The magic pool is also very difficult to recharge and is done so via items being randomly dropped in battles being crafted into mana back at town. One or two spells per mission quickly becomes one or two every four or five missions, depending on players’ luck. While heroes’ hit points gradually replenish when they’re back in town, and gold can be spent to speed this process up, there is no such time-based or currency-based method of recharging mana. This makes the poorly designed sorcery part of Swag and Sorcery a gameplay element that becomes seldom used. 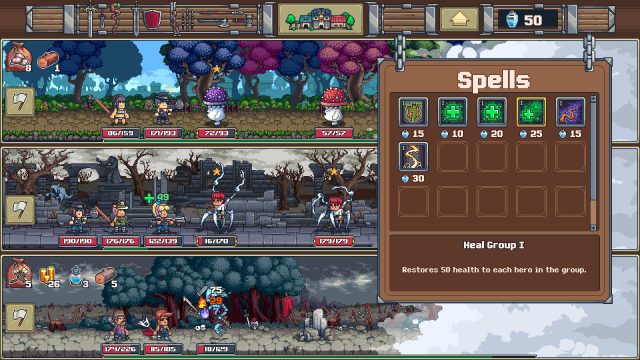 With the sorcery portion sadly failing to impress, the swag portion of Swag and Sorcery becomes the next topic to scrutinize. Good news: there is a lot of swag in this game, from multiple resources to gather in each zone to many different pieces of armor and weapons that run the gamut from leather armor and broadswords to ’90s grunge t-shirts and guitars. A great deal of enjoyment can be had playing dress-up with the heroes in this game, and there is plenty of in-game encouragement to do so. Every so often, fashion shows take place in town and players can enter their characters to earn both gold and reputation points. Not only does the actual equipment characters have play a part in how they perform in fashion shows, but the color players have chosen to make that equipment and how well it compliments other equipped items does, too. While this can be a fun little gameplay element, it simply takes too long.

Want a low-level character to have a beginner’s green leather vest to wear to their first fashion show? This first requires multiple runs through areas to get the required randomly encountered resources. Then heroes have to visit a specific shop and wait for a timer to count down until the item has been crafted. Better items take longer, and if multiple items or sets are being made, minutes might be spent just watching a timer count down like one would expect from a free-to-play mobile game, only in Swag and Sorcery there is no premium currency available to speed up the process. This might sound like a good time to send heroes out on a mission, but those heroes are required to be in the buildings to do the item creation. The game also limits the number of heroes available and exponentially increases the cost to hire more. Once all this time has passed and the character has created a leather vest, the hunt for random monster drops that allow for upgrading and coloring of items takes place. Taking into account annoying randomly-applied effects, the grind for a single piece of equipment with desired results could well last an hour based upon all the nuances in the swag system. 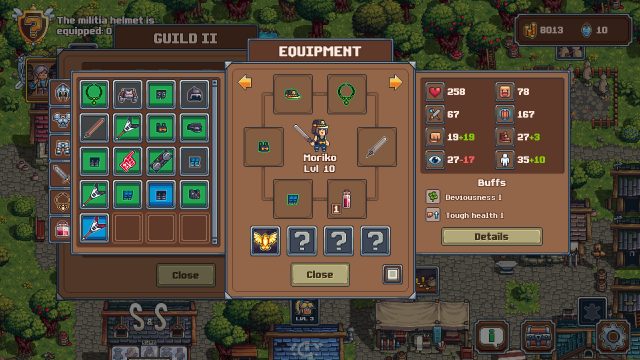 Plenty of fun equipment is available for heroes to play dress-up in.

If all the above systems seem like a lot for what is supposedly an RPG-lite experience, the final portion of the game attempts to make up for the complicated parts. The city-building portion of Swag and Sorcery is simultaneously disappointingly minimal and refreshingly simple. There are no more than a dozen structures to build and upgrade and each has a straightforward function in the city. They can eventually be upgraded, but each serves a blessedly singular function such as crafting armor, healing, relaxing heroes, or creating weapons. Those looking for a deep city-building experience will be disappointed, but those wondering where the advertised simplicity of this game is will be pleased to find it here.

Visually, the pixel art in Swag and Sorcery is finely detailed and well-animated. There is always something new and fun to look at, be it the wide variety of equipment or the actions of a rat in the background. The music is at best average and at worst perfunctory, neither worth turning the volume up to enjoy nor muting to avoid, it simply exists and is there. While not all dialogue is voiced, the portions that are voiced are done very well and leave the player wishing for more than a few lines every couple of hours.

Swag and Sorcery bills itself as an idle RPG and city-building game. While there is truth in that advertised blending of genres, the ingredients offered don’t combine into a palatable recipe for success. Ultimately it offers far too little city building, and the only idleness I experienced is while I sat and watched hundreds of countdown timers tick down during item creation. There are a lot of game elements that feel like good ideas on the face of them, but end up being either locked behind ridiculous amounts of grinding or inside systems overly complicated for a casual RPG experience.