It’s only been one day on the E3 show floor, but I have a strong feeling Finnish developer Action Squad Studios’ tactical RPG Iron Danger has done enough to mark itself out as one of standout titles as the show. At first brush, however, the game looks like any number of other isometric dungeon-crawlers set in some fantasy universe or another. Looks can be deceiving. It’s when one pays attention to the bottom fifth of the screen — helped by having someone like Action Squad Studios’ Sami Timonen and brothers Jussi and Antti Kemppainen nearby to break things down — that things go from bog-standard to uniquely exotic in no time at all.

There are two modes to Iron Danger’s gameplay. The first is adventure mode, where the two on-screen characters in the party move about the in-game maps as you would expect, exploring, looting treasure… general spelunking, really. But open a door or round a corner and encounter enemies, and combat mode sets in. It does make any difference to what players see, but the game comes to a sudden standstill as time freezes. 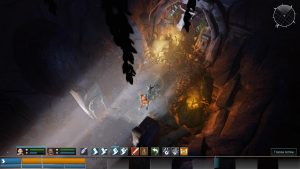 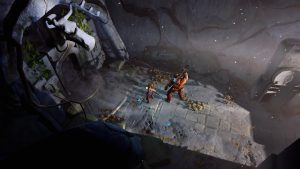 This is where the bottom of the screen comes into play. During combat encounters, time is measured in Heartbeats, with each Heartbeat taking up a half-second of combat time. Underneath the dungeon view are two timelines spreading across the screen from left to right, one for each character. These timelines are split into fourteen equal sections — the Heartbeats — representing a total of seven seconds of combat, though the final four always represent future actions. It’s now the player’s task to fill these increments with commands that the characters will then carry out, choosing from an impressive list of on-screen icon and movement abilities. It isn’t a simple matter of ordering a unit to cast a spell or move; the precise direction for each command must be indicated by dragging an arrow across the screen. On top of that, many commands require different lengths of time; firing a particular arrow shot, for example, takes up three Heartbeats, with indicators marking where the bow is drawn and the arrow released. It leads to a lot of considerations and the “tactical” part of the game’s description really cannot be overstated.

That’s only half of the story. There is one more crucial ability the player has control of: time manipulation. At the press of a button, time moves forward one Heartbeat, and party members and enemies alike carry out a half-second’s worth of action. However, if you decide you don’t like the way battle is shaping up, you do have the ability to rewind time back to the first Heartbeat on the screen and alter the characters’ actions any way you like. This even includes undoing the death of an ally due to an ill-timed decision. But beware: changing any action erases all subsequent actions as well, and enemies will alter their behavior according to your new path. Don’t like the way it’s going? Had a party wipe? Simply rewind time and change it. Once time has progressed far enough to move a Heartbeat off the left side of the screen, however, it can no longer be altered. Everything taken on board, the combat system resembles a carefully choreographed dance. 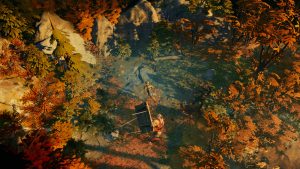 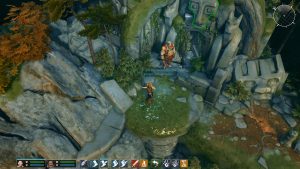 There is a narrative reason for this unique system. At the game’s outset, Kipuna, the protagonist, finds her sleepy village under siege by invaders, and in the ensuing scuffle she falls into an ancient temple and is impaled through the chest by a magical time shard that grants her the ability to roll back time by five seconds. After meeting with another survivor, they set out to warn the king of the invading threat, only to be sent on a quest to securer further magical artifacts that only Kipuna, with the time shard still protruding from her body, can safely handle.

Before my time with Iron Danger came to an end, Sami and Antti had a few last things to mention. A feature the team was visibly proud of is the ability to use real-world physics to cause some interesting chain reactions within the game, where setting off an explosion, for example, may topple a nearby tree, which in turn can crush an unsuspecting foe standing underneath it. When asked whether there would ever be more than two characters, Antti admits that there is currently at least one instance of this, but that play-testing has revealed managing two timelines simultaneously really is the sweet spot for most people to be able to get in a groove that feels natural. Unfortunately, Sami wasn’t able to name an exact release date yet, beyond the cryptic “early next year”. But those looking for a PC dungeon-crawler offering something a bit different, and not afraid of a “high level of challenge” (Antti’s words) can start getting excited now.