Grinding Gear Games has announced the latest expansion and Challenge League for its free-to-play action RPG Path of Exile. Legion will be released for PC on June 7, 2019, before coming to PlayStation 4 and Xbox One on June 10, 2019, and Grinding Gear Games’ Chris Wilson was able to give RPGamer a heads-up on the new content as well as a complete revamp of the game’s melee combat.

Path of Exile: Legion explores the world of Wraeclast’s history of conquest. The souls of five famous generals — and their armies — from across a 2,000-year span have become trapped in the Domain of Timeless Conflict, where they fight against each other in a neverending war. Legion lets players manifest these souls in the world by activating a monolith found in each area of the Challenge League. 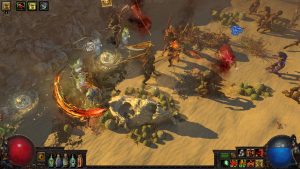 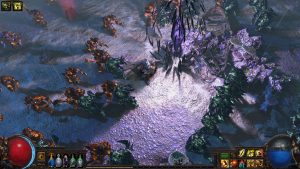 Activating the monolith causes two of the armies to appear, frozen in time. Players then have a short period to untether as many monsters as they wish by damaging them. Once the period ends, time unfreezes and those monsters that were untethered appear in the world, continuing their battle while players fight against them and claim any loot drops. Many of the potential monsters will have valuable rewards on them, indicated by symbols above their heads. There are also chests to untether as well, so players will have to balance risk with reward by tagging enough enemies to get a decent number of valuable items, but not too many as to make the ensuing battle too difficult.

Legion monsters will also drop Splinters, which can be combined to form the Emblem of the monster’s army. These Emblems are used to access the end-game Legion content. Emblems can be placed in the Map Device, which is used for much of the end-game in Path of Exile as a whole. If players place two or more different Emblems in the Map Device, they will be taken to the Domain of Timeless Conflict itself where they will face off against those armies and get the chance to earn huge rewards as the armies fight each other as well as the player. Map Devices have four slots, but Legion will make it possible to unlock a fifth slot and potentially face off against all five armies at once. 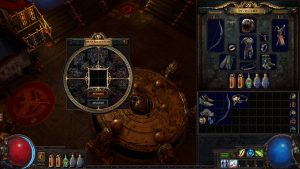 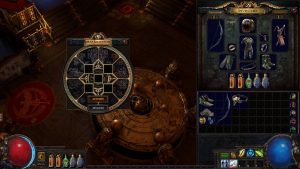 Another addition to Legion is Incubation Items. These are equipment modifiers that will guarantee a specific type of rare item to drop once a certain number of enemies is killed. These Incubation Items can be traded between players and are stacked, with players able to apply separate Incubation Items to each piece of equipment.

As with previous expansions, Legion will add twelve new unique items. One of the new items is Aukuna’s Will, a pair of summoner gloves that can raise zombies without needing to consume corpses of recently-killed monsters as well as counting the player’s zombies as corpses. In addition, fifteen existing unique items have been selected to be themed around the new armies, and have been rebalanced to become powerful rewards for Legion. Voll’s Protector is one of these, and has received a new passive bonus that grants power charges.

The last new additions in Legion are special jewels for each of the five armies that can be socketed into Path of Exile‘s giant passive skill tree. These jewels are hard to get, but when one is socketed it will modify all nearby passive skills in different ways. For example, the Vaal jewel corrupts nearby skills into Vaal-themed passive skills. Players will be able to trade these jewels and learn how each behaves; specific ones will prove highly useful to different players. 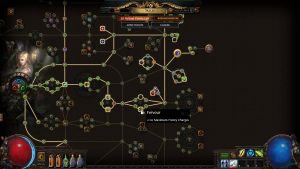 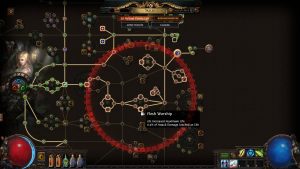 The other major change to Path of Exile is the complete revamp of the game’s melee system. This is something that Grinding Gear Games has been looking to do for a while, and it is aiming to alleviate as many of the reported issues that players have had with the melee combat as possible in one go. For a start, players will now be able to cancel attack animations immediately after they have caused damage or right as they begin. Movement-based skills will activate immediately, with new low-level movement skills added to many classes, letting players dodge much more effectively.

In addition, melee attacks will now hit any adjacent enemies instead of just the targeted foe, with damage timing also being adjusted, and targeting has been altered so that melee characters will automatically target a new monster if players are still holding the attack button down. Animations have been overhaul, and now support chained animations and dynamic speed changes. Other changes include the removal of the accuracy cap of 95% that forced a D&D-style one-in-twenty guaranteed failure chance. The early-game monsters have been rebalanced to better work with the overhaul to melee as well as the various other changes that have been made to the game over the years.

Grinding Gear Games will be releasing two new archetype builds to help showcase the new melee overhaul. The first is the Blood and Sand Gladiator, which uses new skills to take advantage of two different stances: Blood Stance and Sand Stance. Blood Stance is useful for damaging close enemies, while Sand Stance is more defensive and better at producing AoEs. The other archetype is the Rage Berserker, which uses the Rage buff. The Rage Berserker looks to generate that Rage buff and then consume it to launch powerful attacks with multiplier bonuses. 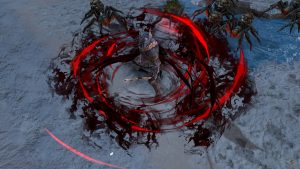 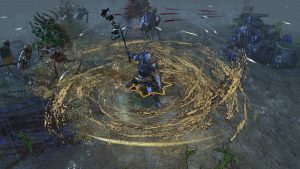 Grinding Gear Games also announced that it is teaming up with Kakao Games to launch Path of Exile in Korea. The Korean version will launch on the same day as Legion and include all of the current content. Unlike the Chinese and Taiwanese versions, however, Korean players will be able to play with others around the world. Like all other Path of Exile content, the expansion will be available to all players for free.

In upcoming Path of Exile plans, Grinding Gear Games is planning to continue its three-month expansion cycle, with the next expansion likely to release in September. The developer is also hosting its first ExileCon Fan Convention in Auckland, New Zealand on November 16-17, 2019. Tickets are still available at the time of writing.