In this edition of the column we take a look at a couple of adventure releases on Nintendo Switch: Daedalic Entertainment’s Deponia and Spike Chunsoft’s Steins;Gate Elite.

Deponia is the first of a four-game series of point-and-click adventure titles from Daedalic Entertainment, and recently came to Nintendo Switch after previous releases on PC, Mac, Linux, iOS, PlayStation 4, and Xbox One. The game is set on the planet of Deponia, which has become a giant landfill site. Players control Rufus, an egotistical young man who is aiming to escape Deponia to the supposed utopia of the floating city of Elysium, which sends down crafts to make regular trash dumps. Rufus’ ill-thought attempts have long been an annoyance to the residents of the town of Kuvaq, thanks to their usual destructive results.

The game begins with players helping Rufus set up his latest attempt of firing a manned rocket to one of the visiting craft. In an unexpected, but brief, success, he lands on the craft only to come across a mysterious woman named Goal being accosted by security guards. In his attempt to aid her, he knocks her off the craft and then follows, landing back on the outskirts of Kuvaq. Realising that Goal may be his ticket off Deponia, Rufus looks to first help her recover from the previous fall and get her back to Elysium. 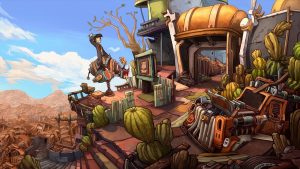 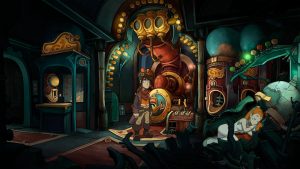 Unsurprisingly, the six-hour adventure joins its many point-and-click brethren with a heavy focus on humour. Much of it comes from a world filled entirely with snarky characters, all quite understandably not too pleased with their lots in life even without having to deal with Rufus, though there is plenty of traditional slapstick thrown in. Rufus is not entirely unlikable; even though he acts for selfish reasons, he finds himself willfully helping Goal and not willing to throw away the lives of those on Deponia to achieve his goal. Though the ending is satisfactory, one thing this first entry certainly doesn’t do is attempt to resolve its dangling plot threads, and virtually all of the issues brought up in the game are left up in the air for its sequels to deal with.

Deponia‘s gameplay is basically what one would expect from a point-and-click adventure. Players go from screen to screen finding various items and either combining them or using them with other things in the environment to solve puzzles and progress. Like many entries in the genre, some of these combinations are a stretch and so players are likely going to devolve into just trying everything to see if it works. The game works well on Switch, though there are times when the controls are a bit awkward, particularly when trying to navigate Rufus’ current inventory.

The game utilises its trash theme and art style very well. Despite being set on a trash heap, the game is vibrant, while the animations are good throughout. Meanwhile, the voice acting is also strong, with some brief entertaining musical interludes in between chapters. In the end, Deponia is certainly entertaining and worth the time one will spend with it, but there is one final and important caveat. The $40 launch price on Nintendo Switch is going to be an issue for many, especially given its pricing on other platforms and the selection of adventure titles also available on the system. It’s certainly an enjoyable game, and for adventure fans it’s worth keeping on the radar, but it’s an eye-widening price tag in the context of the game. — Alex Fuller

It’s not controversial to call Steins;Gate one of the best received visual novels of all time, particularly if one takes into account the reception of its anime adaptation as well. The game forms part of MAGES Inc. (formerly known as .5bp)’s fairly loosely connected Adventure Science series that features Chaos;Head, Chaos;Child, and Robotics;Notes, each of the games focusing on a sci-fi theme albeit in a contemporary setting. Steins;Gate is themed around time travel and multiple universes.

The original game was first released for Xbox 360 in Japan in 2009 before later coming to PC, PlayStation Portable, iOS, PlayStation 3, and PlayStation Vita, but all of these versions initially seemed to be destined to stay in Japan. The 2011 anime series was the first chance that western audiences were given to discover the title. The success of the anime series, and a general acceptance of visual novels in the west, finally encouraged JAST USA to bring the game over on PC in 2014, with PQube later releasing the game on PlayStation 3 and PlayStation Vita. Steins;Gate Elite is a remake of that game — its Japanese release coinciding with its ninth anniversary — with producer Chiyomaru Shikura seeing it as an opportunity to revitalise the visual novel genre, something made possible thanks to the existence of the anime series.

While the original Steins;Gate was a regular visual novel with static portraits and backgrounds, except for its phone-based decision system, Steins;Gate Elite aims to look just like an anime, and is largely made up of animation taken directly from the anime series. Plenty of tricks are used to make the animation fit within the visual novel framework, such as freezing the non-focus characters and some heavy reuse of shorter clips during dialogue. However, it all works very well and adds some nice visual flourish onto a fantastic story. 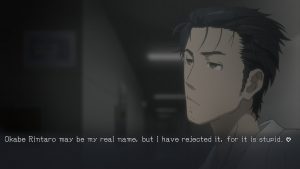 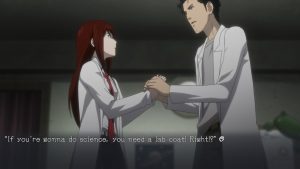 Steins;Gate follows Rintaro Okabe, a university student in Tokyo during the summer. He spends his time at his “lab”, an apartment that he rents above a TV repair shop, with friends Daru and Mayuri where he creates devices of highly debatable use. Okabe attempts to take on the persona of the mad scientist “Hououin Kyouma”, though it becomes quite clear that this is something he does mostly to amuse himself, getting vastly different buy-in on this from the other cast members. As part of his summer activities, he attends a scientific conference where one of the speakers is Makise Kurisu, a young genius living in America, on the subject and issues of time travel. After getting into a disagreement with Kurisu about her dismissal of the concept, he wanders the building, only to come across Kurisu lying in a pool of her own blood. Panicking, Okabe sends a text to Daru but at that very moment, something happens and he wakes up in a world where not only what appears to be a satellite is stuck in the conference building, but where Kurisu is alive and well.

This begins a brilliant tale that includes conspiracies and some interesting thoughts on the ethics and potential effects of time-travel. Okabe investigates what has caused him to seemingly change from one version of the world to another, joined by Kurisu who is unable to resist satisfying her curiosity after Okabe’s reaction upon seeing her alive. The game is deliberate in its build-up, with the first half devoted to setting up the second half as everything comes to a head. The contributions of the first half all come back to play their part in the second. Steins;Gate obviously requires some fairly big handwaves of multiple scientific elements to justify its premise, but it does so in a believable way and creates a highly intriguing universe made up of its many worldlines.

While the overall tale is fascinating, where Steins;Gate comes into its own are the characters and their interactions. Okabe’s initial attempts to play up his mad scientist persona may grate a few initially, but he quickly grows into a fantastic lead, especially as the cracks start to appear once things start cascading. He and Kurisu’s interactions are particular highlights, starting off entertaining as the two personalities clash, but the build-up of trust and understanding between them leads to plenty of heartwarming moments. All of the characters get their moments in the spotlight on the path to the game’s true ending, as Okabe gets to understand both their personal histories and motivations more. 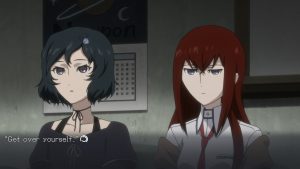 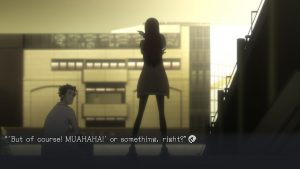 Reaching most of the endings is more a quick step off the main track to the true ending than full routes on their own account. All of the non-true endings are reached by making singular decisions at specific plot points, and it’s made very clear where these points are. The true ending, however, takes a bit more work, and those aiming for it will likely need to use a guide, as it requires that Okabe makes certain responses to a number of text messages received throughout the game. This would be the main strike against the game, as the fact that the mechanism for reaching the true ending in the first place is not at all apparent, and even the knowledge that there is a “correct” path doesn’t help in figuring out which response would be the correct one in many cases. Those who actually do reach the true ending, however, will be well rewarded and highly satisfied for their efforts.

With the animated adaptation effectively becoming the source material, some things have been lost from the original visual novel. The phone-based decision system has been simplified, so that Okabe will now automatically look at any texts received, while most of the texts that offered brief optional and inconsequential additions have been removed. It also omits the RaiNet tournament, which admittedly didn’t do much for the overall story but did add plenty of extra flavour to Faris’ personal story arc. The one disappointment comes from the fact that the game doesn’t feature the stellar English performances in the anime. However, that’s not to say the Japanese voice acting isn’t excellent. Okabe and Kurisu both stand out, but the cast as a whole is top-drawer.

For those that haven’t played Steins;Gate, Steins;Gate Elite is an ideal place to start, and its use of animation will help ease in those who are less interested in the standard visual novel layouts. For fans, there might not be anything new in terms of content, outside of new animation provided for all of those endings not shown in the anime, but Steins;Gate Elite still manages to impart all of the entertainment that would’ve drawn them in the first place. This was my fifth iteration through the story in its various guises, and the experience remains as strong as ever.  — Alex Fuller