In this installment, Sam Wachter plays a horror visual novel called Distress, and recognizes that she wants to rewatch Strange Days. Given she isn’t a fan of horror, why does she do these things to herself?

Distress came to me at the right time. A friend of mine made the recommendation knowing that I love visual novels, even though I am a total wuss when it comes to horror. Once I started playing, it gave me vibes of the film Strange Days, and I knew the game and I would be very good friends.

Taking on the role of Demetria Barton, players learn about her life as a former foot soldier in a battle that went completely wrong. Despite the loss, it gave her a new arm and a lust for adventure, making her the most requested bounty hunter in the galaxy. Along with her crew of misfits, her mission is to investigate Nova-8, a city full of demons and ghouls who want nothing more than to rip people’s heads off. Demetria and her team are to defend themselves from the creatures who inhabit the city and hope to make a quick buck doing it. 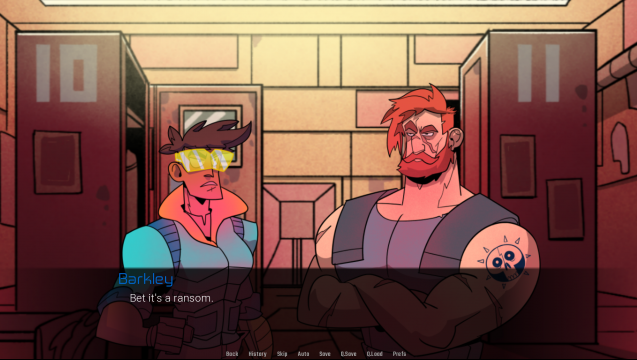 Distress has a great and well-developed cast of characters in spite of what a small visual novel it is. Demetria as a protagonist is very black and white in her decision making given she is an ex-soldier. She has a surprising amount of personality and sass, even if she is the player character. Barkley is the burly and gruff teddy bear who happens to be the second in command, and he’s my favourite character if only because he has some of the best interactions with the cast. There is a particular exchange between him and a former junkie named Zeef that made me laugh pretty hard. There is Sara who dreams of being a doctor, with her sarcasm as sharp as a scalpel, and Nyles, that questionable friend who keeps hanging out with you even when you didn’t ask him to. Each of the characters is memorable, and the scripted interactions do a great job of showing the crew’s companionship.

Decision making in Distress is uncomfortable to say the least. While there are only two major branches to explore, the outcomes of them feel radically different, and it’s easy to feel like your choice is misleading. A lot of tension gets built earlier on and even though there are only those two main routes, there are a lot of decisions once the player is knee deep in the story to have to think carefully about their choices and hope that no one is sacrificed in the process. 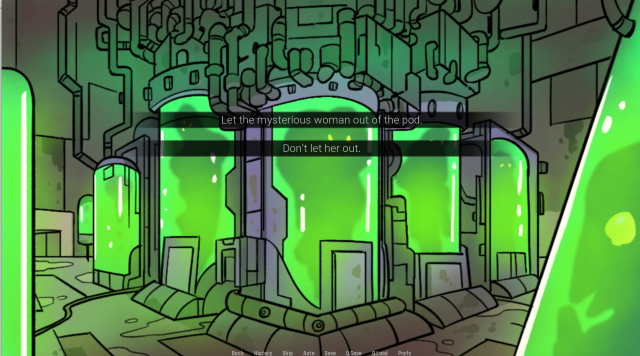 Distress sports multiple endings and most of them are pretty tragic. Hilariously, on my first playthrough I managed to get a very positive, almost happy ending, while on a different run, I had my most important comrade get brutally ripped to pieces. There’s a lot of emotion in this game that is well placed, and it helps that a playthrough takes just shy of an hour to complete. The pacing is great, the art style has a nice quirk to it that I personally enjoyed, and the music is fairly solid given the limited number of tracks.

There are not a lot of visual novels out there that are worth the price of a cup of coffee. Distress is totally worth the asking price of five dollars, and I enjoyed my many playthroughs. I was a weepy baby on one particular run because of how piss-poor my decisions were.  I definitely encourage those who love visual novels to give this one a look, especially if you love fleshed out characters whom you can easily grow attached to. Distress will make you laugh, and it will also make you uncomfortable. Tread carefully, and remember, the the pink creatures don’t shoot acid: it’s the green ones!