Tobyfox has confirmed that Undertale will be released for Nintendo Switch worldwide in September 2018. The game will be available digitally through the eShop, with two physical editions available to pre-order now through Fangamer. The standard edition is available to pre-order for $29.00, while a Collector’s Edition that includes a gold-plated music box locket, a sheet music booklet, a story booklet, and physical soundtrack can be pre-ordered for $69.00. The two physical editions are also available and shipping now on PlayStation 4, PlayStation Vita, and PC.

Originally released for PC in 2015, Undertale lets players control a human who has fallen into an underground world of monsters. They are tasked with finding their way out, lest they remain trapped underground forever. The game’s turn-based battle system allows players to get through encounters without necessarily killing their opponents. Those wishing to read more can check out Zach Welhouse’s review of the PC version. 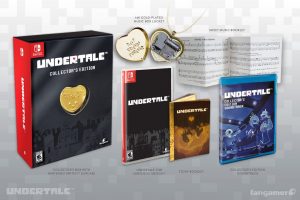