Bandai Namco has released a few more details for the upcoming Digimon Survive. The company provided a few extra details on a pair of characters, who have been shown in previous screenshots. The first is Aoi Shibuya, who is an articulate upperclassman good at handling both cooking and security, and partnered with Labramon. The second is Minoru Hyuga, a classmate of the main protagonist who is generally optimistic and partners with Falcomon.

In addition, Bandai Namco reiterated the game’s choice elements. The story portions feature visual novel-style storytelling, including points where players will have to make choices within a limited amount of time. These choices can have big impacts on the story, potentially leading to the deaths of the protagonist’s friends and other important characters.

Digimon Survive aims to mix visual novel, tactical RPG, and monster-raising gameplay. It stars Takuya Momotsuka, a middle school student who gets lost in the digital world and partners up with Agumon as he looks to find his way back home. The game is set to be released in Japan in 2019, with Bandai Namco already confirming a western release for PlayStation 4, Xbox One, Nintendo Switch, and PC, also in 2019. 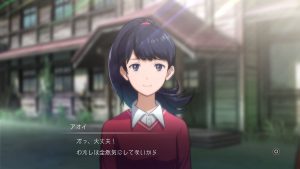 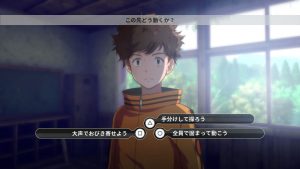