The World Ends with You: Final Remix Set for September Release in Japan

Square Enix has announced that The World End with You: Final Remix will be released for Nintendo Switch in Japan on September 27, 2018. The company also announced that Japan will receive a special “It’s a Wonderful Bag” edition available exclusively though Square Enix’s online store for ¥17,000 (around $155) that contains: 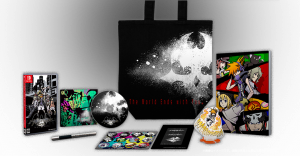 The World Ends with You: Final Remix is an enhanced port of 2008 Nintendo DS title The World Ends with You, which was also released on iOS and Android. The game is a 2D action RPG set in the Shibuya district of Tokyo and follows Neku, a young man tasked with competing in the Reaper’s Game in an alternate plane of existence called the Underground. The Final Remix version includes a new story scenario as well as new tracks and arrangements from composer Takeharu Ishimoto, and is also planned for release in North America and Europe sometime in 2018.