Collect-a-thons and side mission distractions notwithstanding, The Frozen Wilds has a very worthwhile and engaging main quest line that’s worth seeing through to the end.

When Guerrilla Games’ released Horizon Zero Dawn earlier this year, the unique post-apocalyptic open-world RPG drew me in like few games do. Its engaging narrative, fun and fluid combat, and impeccable graphics and sound design earned it a place as one of my favorite games of 2017 so far. It paved a path that’s nearly impossible to improve upon, so the release of its first full-blown DLC campaign, The Frozen Wilds, initially left me somewhere between cautiously optimistic and flippantly dismissive — after all, it couldn’t top what came before, so why bother trying? What I got ended up being a pleasant middle ground. Side quests were on the repetitive side and collectibles aren’t much different from what can be found in the main game, but eventually an engaging story combined with more of what made the original game so great made the time I spent in The Frozen Wilds more than worthwhile.

Aloy’s path in The Frozen Wilds takes her to the homeland of the spiritual Banuk, a new tract of land mired in never-ending winter. Purchasing the DLC places a new NPC into the world, who points out some new handholds hewn into a rock face, creating a way across the mountain range that separates the rest of the game map from the Banuk lands. Climbing over and arriving on the other side sees Aloy immediately stumble into a Banuk settlement, where the local machine population has been recently changed in frighteningly dangerous ways. The Daemon, a malign entity responsible, has taken up residence in a mountain on the other side of the valley, spewing thick choking smoke into the air day and night. Knowing a thing or two about dealing with lethal machines, Aloy decides to follow up on these developments by seeking out the village’s absentee shaman somewhere in the wilds. Thus begins an adventure wholly separate from the events of the main campaign that will take somewhere around ten hours to complete, or nearly twenty for a completionist run. 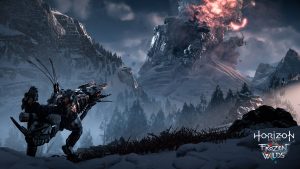 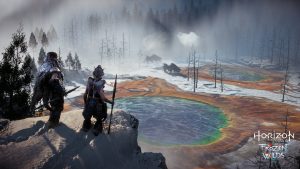 Of course, my playtime could be artificially inflated a bit due to the amount of times I simply had to stop, stare, and fiddle with the in-game camera controls to take snapshot after snapshot. HZD was already one of the best-looking games out there, and the DLC looks even more gorgeous, with sweeping vistas, gorgeous sunrises, and sparkling white snowdrifts at every turn. The Banuk lands cover what was once Yellowstone National Park, complete with its prismatic pools and lush forests. Players can visit its derelict visitor’s center, a dam control station, and even Old Faithful. It features some astounding particle effects, with flurries of snow being kicked up by rogue gusts of wind, not to mention the full-blown snowstorms. Sound, too, is top-notch, with especially the principal voice actors offering flawless characterizations. The music is as sweeping as before, and is so seamless that it’s often only in the midst of a pulse-pounding encounter that one realizes how it naturally swells from background music to an epic battle score. The little things are as delightful as the big ones, like the satisfying crunch of snow underfoot, or the way cutting a furrow through a deep snow bank will expose the brown and withered grass underneath.

For those who truly want to experience everything The Frozen Wilds has to offer, the vast majority of time will be spent traveling the snowy outside environments the Banuk refer to as the Cut, and engaging both mechanical and human foes in battle. To this end, a whole new skill tree has been added, which offers some useful new abilities such as being able to gather while mounted and, best of all, a whole new attack initiated while riding a mount directly into a fray. The new skills, of course, carry over into the main game as well. Additionally, there are new weapons and outfits to purchase or find while questing, which add some new elemental capabilities to Aloy’s arsenal. Purchasing these important items requires collecting Bluegleam, a new currency which can only be used in DLC areas.

Combat itself, even with new weapons, remains largely unchanged, though there are some new challenging enemy types in The Frozen Wilds. The most interesting of these are machine towers, which do not attack directly but send out pulses of energy that make all other machines in their vicinity harder to kill, increasing their aggression and healing them even as Aloy is chipping away at their health. Many familiar creatures have received a stat boost, as they are now under the influence of the Daemon. Facing down Daemonic Stalkers in an enclosed environment or being pitted against a Daemonic Thunderjaw are no small tests of a player’s mastery over his or her arsenal. A small handful of brand-new creature types are also present, and will quickly teach players to fear the sight of them; Scorchers are vicious predators that are as fast as they are relentless in their attacks, literally launching themselves across the battlefield in a flurry of razor-sharp claws, and the towering Frostclaws can charge Aloy and grab ahold of her, doing heavy damage before letting go again. 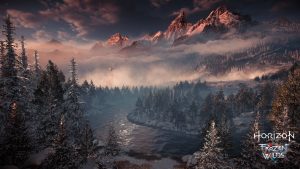 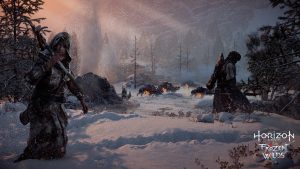 Intense combat is nothing new for Horizon Zero Dawn though, and always took a backseat to exploration for me personally. I would have been perfectly happy if the entire DLC consisted of nothing but Aloy delving into the remains of structures from the past, ferreting out all their hidden secrets. The Frozen Wilds does offer some of this, and it’s as entertaining as ever hearing Aloy’s descriptions and interpretations of what we understand to be a parking garage or a subterranean military jetplane hangar. Even more fascinating is the way the Banuk have been portrayed to live in harmony with these discoveries. Being a deeply spiritual people, a lot of attention has been paid to developing their dogma and how they’ve appropriated technologies and structures from the Old Ones for themselves.

Which brings me to what makes The Frozen Wilds a truly worthwhile experience for seasoned Horizon players. Collect-a-thons and side mission distractions notwithstanding, it has a very worthwhile and engaging main quest line that’s worth seeing through to the end. Though it’s slow to get started, things eventually reach a point where it’s hard to put the game down. Ourea and Aratak, the Banuk shaman and chieftain whom players will spend most of their time with, are deep and complex characters, and rival any of the main game’s supporting cast. Towards the end, stakes rise and emotions run high, and a connection forms that players will be loathe to leave behind when they venture out of the Cut and back to the story proper of Horizon Zero Dawn. While The Frozen Wilds is a standalone experience, some effort has been put into tying its overarching elements into the game’s larger plot in some post-DLC dialogs, which shed some more light on people and events from the main game, depending on how much of it players have already completed. Players should be aware that The Frozen Wilds is an area that offers plenty of challenge even for maxed-out characters, with some encounters that easily outpace what’s found in the main game in terms of difficulty, and should be approached with caution by lower-level players.

The Frozen Wilds, as beautiful as it is to look at and listen to, starts as sort of a mixed bag. Yes, it offers new abilities and gear. Yes, it continues and even expands a little on the combat from the main game. But there is a feeling of “been there, done that” present in a lot of its early goings-on. Players who loved the combat above all else in the base game will be overjoyed at this point. The rest of us will find some interest in the exploration sections, picking up text and audio data files that detail the events that changed Yellowstone to its present state. But it isn’t until players devote their playtime to the main narrative that the DLC turns a corner and goes from good to great. It may only be a side story to the main campaign, but it is as packed with wonder and excitement as some of the best moments of the main game, and earns its place as a great way to fill Horizon‘s admittedly slower second act, or as bonus material for all those who’ve already discovered everything the main game has to offer.