Zettai Hero Project: Unlosing Ranger vs. Darkdeath Evilman is a mouthful, not just to say, but to explain. When a fifteen-year-old boy gives up his body for science and takes on a loving prinny wife for justice, not every question has immediate answers. Thankfully, both the title and the description can be abbreviated. In short, ZHP is a roguelike dungeon explorer smashed up against Nippon Ichi Software’s love for excessive turn-based strategy. Like many roguelike games, the core premise of ZHP is simple and elegant: the hero ventures into randomly generated dungeons and kills monsters. He starts at level one each time, but his base statistics increase based on the total number of levels gained. Moving and using special attacks require Energy Points, which are restored by eating meat. Using weapons and armor decreases their durability until they’re practically worthless. Elaborate bosses wait at the end of every dungeon, while midbosses occasionally hamper forward progress. Where ZHP really shines, however, is how it piles up optional subsystems and ways to break these basic rules. Although advertised as an epic grindfest, just making it to the end of the story doesn’t require endless retreads or obsessive character tweaking. That’s what the optional dungeons are for — and they go deep.

The game begins with the always-victorious Unlosing Ranger on his way to save Japan from the monstrous Darkdeath Evilman. Disaster strikes when the Unlosing Ranger is struck by a car while crossing the road. With his dying breath, he bequeaths his morphing belt to the true hero of the story: a bland, voiceless boy whose only real character trait is his unwillingness to give up in the face of overwhelming odds. Like most teenage boys, the hero has little chance against his foe. In order to achieve absolute victory, the new Unlosing Ranger must first train in the land of heroes: Bizarro Earth.

Bizarro Earth is like regular Earth, only made out of random dungeons and populated with monstrous reflections of human psyches. As the Unlosing Ranger trains his body and rescues the psyches of troubled humans, the inhabitants of Bizarro Earth also teach him the true meaning of heroism. Even with the constant sarcasm undercutting the morals, these lessons are delightfully sappy. At times, they verge into after school special material, touching on hot topics like bullying and responsibility to one’s family. It’s a Japanese RPG mainstay to have a protagonist who’s fuelled by the power of the human spirit or blazing determination; ZHP challenges the notion by mixing speeches about virtue with the difficulties heroes have in attracting girlfriends. Passion and the sweat of youth are what drive the Unlosing Ranger, but they do so with a wink and a wry smile. Every post-chapter summary makes this contrast clear, providing Goofus and Gallant-style speeches as counterpoint to the earnest heroics.

The central story feels short, but this is more of a cry for an encore than a serious flaw. The non-hero characters all receive appropriate character development. Although comedic flaws are the most instrumental in defining each character, there’s enough tragedy to ground them and lend weight to their actions. The issues confronted in each chapter have solid, relatable cores even when drawn to the wackiest of conclusions.

One area where many roguelike games falter is the dungeon design. Endless repetition can quickly become endlessly boring. ZHP bucks the trend by providing a vibrant themed dungeon tileset for each of the main chapters. Every tileset has its own rousing theme music and oodles of props. Some accessories simply add character to the floor, while others are innovations that shape the player’s response to the dungeon. Some of the innovations, such as the mine carts and ambulatory staircases, are more gimmicky than fun, but they still provide a unique sense of place. These tilesets are repeated for the seemingly endless bonus dungeons, but the music receives an upgrade. The optional dungeons have access to exclusive, purchasable tracks. While these tracks can take most of a dungeon-delver’s paycheck to unlock, they’re worth it due to the overall strength of the all-star cast of composers on board. 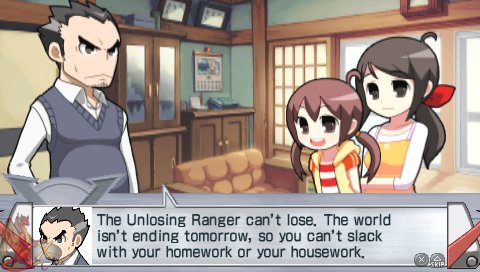 The people of Earth depend on the Unlosing Ranger to not lose.

The Unlosing Ranger may be powered by love and hope, but his body’s also filled with machines. The Dark Clinic converts items into modification chips, which can then be implanted into the Unlosing Ranger’s body. Alone, chips provide small boosts in basic statistics such as Speed and Long Range Defense. More powerful devices can then be built on top of the chips, as long as they’re in the proper shape and color. These devices have more varied effects, including boosting the effectiveness of certain equipment types, restore the Unlosing Ranger to life, and overclocking his strength in exchange for an increased appetite. Since the Unlosing Ranger’s base level resets after every dungeon, some degree of body modification is necessary to avoid unpleasant grinding sessions.

Further modification is available by building up the Unlosing Ranger’s base on Bizarro Earth. The base has six different slots open for buildings that are unlocked through adventuring. Each building provides useful benefits, many of which circumvent the traditional boundaries of the roguelike. The player’s loving prinny wife lives in one of these buildings. She delivers energy-restoring lunches; players who use a lot of special attacks or fear starvation will do well to keep her happy. Other buildings include the blacksmith, who upgrades special equipment, and the insurance office, which will save a handful of items upon death.

Despite the limited number of Super Sentai-style games released in America, a lot of ZHP seems familiar. Even casual fans of Nippon Ichi’s games will recognize returning enemies and character-types. This doesn’t end with hell corgis and mushroom people; Etranger frequently channels Etna, and the comedic insults seem similarly familiar. The cynical response to this familiarity is one of limited resources and running old mechanics into the ground. Given the multitude of new sub-systems that have been added on, however, it’s far easier to recognize these inclusions as fan-service and universe building.

The script localization is spirited and a lot of fun. There are a handful of grammar quirks including a reigns/reins mix-up and a case of mistaken gender, but they’re generally unobtrusive. Deprecating sarcasm oozes from the dialogue, providing strong emotional incentives to give every battle 120%. Occasionally the sarcasm becomes oppressive, hammering the “you’re useless” point until it’s no longer funny. Thankfully, these moments are few and followed by stirring speeches about justice and respect. Much of the humor comes from lampooning superhero tropes, the petty flaws of the heroes, and the absurdities of life on Bizarro Earth. Referential humor gets it chance to shine as well, but it doesn’t overwhelm the more nuanced material. Most of the overt references to Internet memes are constrained to item descriptions. This attitude treats them like a spice for fans who appreciate “putting on [one’s] robe and wizard hat” or guns that create “speed holes.” Even without these references, the game has heart.

Even given the subjective nature of humor, two side characters stick out as being unfortunately crass. The first is a Chinese fortuneteller named Chitii Wok. Her text and voice are both presented with an outrageous dialect that was falling out of fashion years before the term “politically correct” was ever realized. The second character of note is a foreign prince. His personality’s true form is a suit of heavy armor who is an effeminate disappointment to his family. His English voice for these scenes is that of a stereotypically sassy gay man. Only after confronted with his ladylove does he “man up” and speak with a voice more appropriate to his heavily armored body. In other words, the character is violently heterosexual; the homosexual lisp exists only to suggest a comedic weakness and lack of manly prowess. None of the other characters are problematic. Even the Michelle/Barack Obama hybrid, Brick Oldllama, is handled with tact that illuminates one Japanese view of American politics. 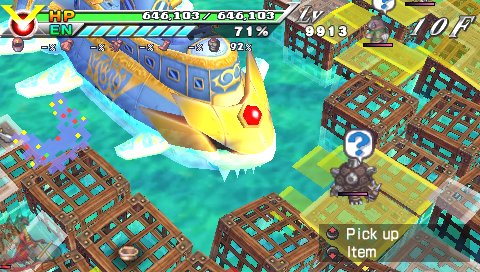 Most of the bosses are quite sub-stantial.

It sounds like both the English and Japanese voice actors had fun with their roles. Pirohiko shifts effortlessly between earnest speeches about the True Path of the Hero and his own fleshy man-failings. Etranger is overly shrill at times, but ekes out sympathy when necessary. Even the disappointing vocal performances are skillfully delivered. One character, for example, delivers a strong performance as long as the background music is turned down to allow her sultry cruelty room to breathe.

As one might expect from a Nippon Ichi game, the fan-service quotient is high. Rarely does this mean resorting to sexual titillation, however. No, the much deeper well of nostalgia serves as the source here. For example, there’s an entire series of optional dungeons based on popular manga and light novels. Completing these dungeons unlocks the option to cosplay as the works’ protagonists. Each cosplay opportunity is a complete sprite-swap for the Unlosing Ranger, meaning that it’s possible to complete the game as Spice and Wolf‘s Holo with tank treads and drills for hands. As with most Nippon Ichi tactical RPGs, stars from past games show up as part of the optional content. Prinnies aren’t the only members of the Disgaea world who test the Unlosing Ranger’s blazing heart!

Like the Unlosing Ranger himself, the game is visually bold. Bright colors and flashy attacks fit the story’s over-the-top heroism, fumbling in only a few places. One of the most immediately enjoyable sights is dressing up the hero. His sprite displays his equipment suite, no matter how ridiculous it ends up being. Unless great care is taken to dress him fashionably, the casual insults levied by his allies will start to make sense. Is snake-haired teenager with a demon tail really fit to be the Earth’s savior? The baseball bat and fake breasts may make sense mechanically, but is it worth looking like a total doofus? Dungeon tiles are similarly bright and engaging. However, some characters and dungeon elements are pixelly around the edges. Fire and trees suffer most noticeably. The dialogue-box character portraits are flat and lifeless, often distorting the spot-on characterization of the larger, more detailed character art.

Zettai Hero Project: Unlosing Ranger Vs. Darkdeath Evilman is a lot of fun. It can be a mindless dungeon delve or the highly focused bout of number juggling and grinding that fans have come to expect from Nippon Ichi Software. Either way, it’s pleasant to look at and a real treat to hear. The humor is hit-or-miss, but cycles through enough modes that there’s a little something for everybody. With that said, repetition is inevitable. Even with the abundance of unique equipment and ways to customize the experience, it revolves around an unchanging experience: killing dudes and finding the stairs for just. One. More. Level.