One of my favourite games at PAX 2019 was a little title that was tucked into the corner of the most unassuming booth on the sixth floor called Young Souls. A love letter to RPG-esque brawlers like the River City series, it combines together slick side-scrolling brawler RPG mechanics while pouring in oodles of innovation, all tied together with a gorgeous aesthetic.  For those looking for a fast-paced action RPG that doesn’t overstay its welcome, this is definitely a title not to be missed.

Young Souls’ story focuses on twins Jenn and Tristan, who live with their foster dad, simply known as the Professor.  When their father goes missing, the twins discover a secret community of goblins that have been living under the surface.  The story interweaves a variety of themes in a way most coming-of-age stories don’t attempt. There are plenty of statements both bold and subtle around responsibility, political savvy, the difference between good and moral choices, and living with the consequences of one’s choices.  The script also does an excellent job of balancing funny and serious moments and is a delight from start to finish, even in the most heart-wrenching moments.  For those who want to kick the cussing to the curb, a profanity filter can be turned on. 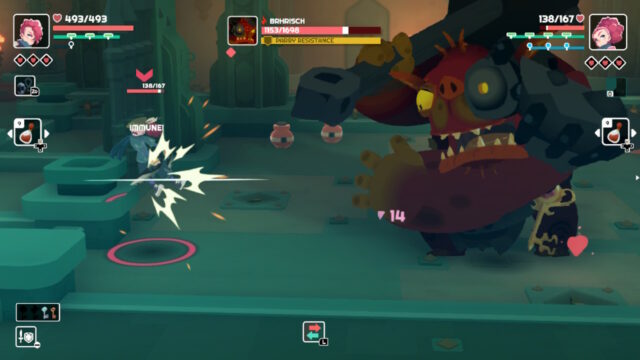 Sharpen that combat timing, or this will become a familiar sight.

Players will spend the majority of their gameplay inside the underground world of the Gobbons, a race of goblins that once lived on the surface but escaped deep into the earth to flee human persecution.  Each general region is divided into themed levels, and each of these levels is again broken down into a number of zones.  Everything players do with the twins feel meaningful, even if it’s just fifteen minutes to finish up a single zone, and like it adds to the overall progression.  Combat is rapid-fire action, and the twins are capable of a variety of combat moves including blocking and dodging, and a perfectly timed parry not only temporarily stuns an enemy but also fills up a mana bar, which can be used to unleash devastating special skills.  Lighter enemies can be flipped up into the air with well-timed attacks, though enemies can turn the tables and flip the player in return.

Each twin can be kept identical or customized via training at the local gym, which can be used to increase three base stats. Strength fuels attack power, resistance decreases damage taken, and stamina increases overall hit points.  Equipment including weapons, helmets, armour, sneakers, and accessories can all further change how each twin plays.  Additionally, different types of equipment have different weights, and a heavier character is a slower character though this too has advantages, as enemies will be less likely to flip them up in the air.  Thankfully, there’s really no wrong way to equip or train the duo, and there’s a use for both lighter, faster characters as well as heavier, slower characters all through the ten or so hours the game will last.

Weapons and armour are primarily won by completing boss battles, which happen at the end of each zone, with major bosses at the end of each region.  Through, the adventure the twins obtain accessories and, once the appropriate Gobbins have been rescued, all three types of equipment can be upgraded in the Goblin Market.  The Market also contains a potion shop, where players can plan ahead to snap up health and mana potions, though both have what can only be called excessively long cooldowns. 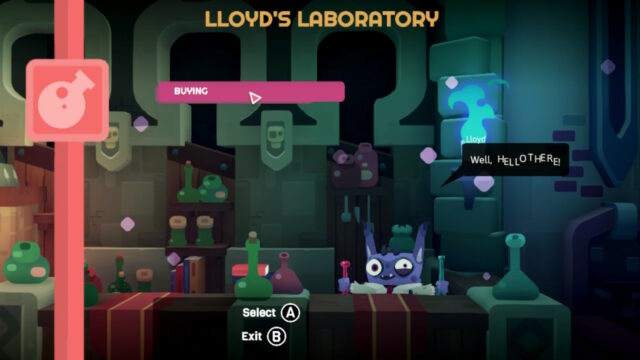 Lloyd’s potions are handy in a pinch, but long cooldowns mean they can’t be relied upon.

Game menus are easy to navigate and contain an admirable amount of readily accessible information, which is strangely hidden away. These include some additional tutorials not given to players at the start of the game that open up a variety of interesting combat options.  Also found tucked away in the menus is a variety of difficulty modes, accessibility options, and display options such as minimizing camera shaking.  Equipping characters, upgrading equipment, and comparing accessories can all be done in a flash, however, it’s important to note the game is not paused while the player is inside the menu.  The Switch version does have noticeably longer load times and the occasional spot of lag in handheld mode, but runs without issue when docked.

One of the many aspects where Young Souls truly excels is pacing.  Combat is fast-paced, dungeons are broken up into easily digestible sessions, and bosses have multiple HP bars that signify new or changing fight patterns, though these encounters never feel too long. It’s easy to pick up the game expecting to play for a small amount of minutes, only to find that an hour has suddenly gone by.  Everything the player does contributes towards progression, whether revisiting old dungeons, hitting the gym for stat improvements, or stopping by the Goblin Marketplace for upgrades. 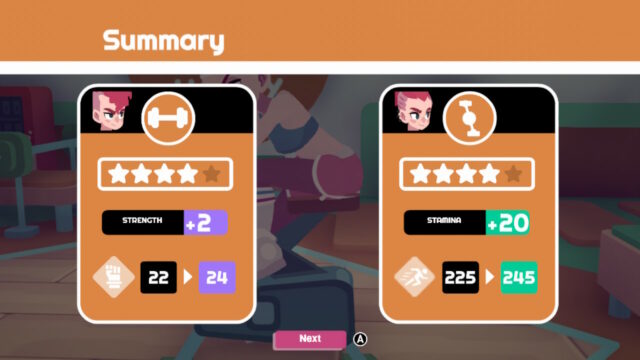 Improve at the gym to customize each twin’s stats as desired.

Young Souls also boasts a high-octane soundtrack that gets the blood pumping during combat, while still lending appropriate levity to silly scenes and weight to serious times.  All of the game’s sound effects from the clang of metal meeting metal to the death throes of all manner of creates are incredibly satisfying.  Similarly, the game’s art direction is masterful, mixing together dark colours with bright accents in a way that ensures the underground experience never feels too dark or cloying, but instead feels fascinating to explore.  The only part lacking in terms of graphics is the small selection of streetwear available for sale; while this is a largely optional part of the game, it’s a little disappointing how few clothing options there are to express Jenn and Tristan’s preferences.

Young Souls is a prime example of the adage good things come to those who wait; with the title finally sprung from Google Stadia exclusivity, it’s the perfect time to see how the game manages to capture the ephemeral fun factor of a brawler, while proffering a multitude of options to make the game more or less challenging, depending on what the player is seeking. Add that to a great narrative with a visually engaging comic-book style of storytelling that doesn’t shy away from challenging topics, anyone looking to dive into a well-paced and superbly-executed adventure should start right here.