Twins Jenn and Tristan, abandoned as youths, are adopted as teenagers by a mysterious professor.  But when the only person who’s ever cared for them disappears, they’ll go literally anywhere to rescue him — including into the land of the goblins!  Young Souls is a beat-em-up RPG crossed with a dungeon-crawler, which creates an interestingly addictive gameplay loop.  Also, it looks incredibly pretty, almost like papercraft. 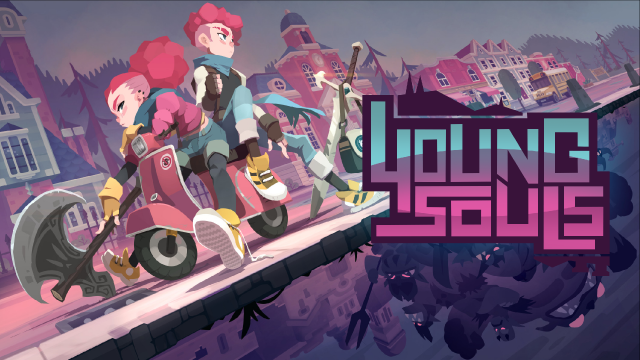 The game is divided into two fairly distinct gameplay sections.  During the day, the twins can explore the mansion, head into town on their zippy little Vespa, go shopping for new equipment and train up their stats.  Not only is there a human downtown, but also an equivalent goblin street, which is also filled with merchants…once they’ve been liberated from the twisting and turning dungeons, that is!  The human world and the goblin world actually synergize together; for example, buying shoes is done on the human side, but only a goblin can reveal each shoes’ special powers…and until they do, they’re simply unidentified gear.

At night is when the action gets intense.  Beat up enemies, finish dungeons, gain levels…lather, rinse, repeat!  As the twins level up, the type of gear each can wear will grow; gear is tied entirely to level, and will not only improve stats but may also add weight to a character.  The heavier a character is, the slower their actions, so weighing the pros and cons is quite literal.  Once inside a dungeon, it’s all or nothing: dungeons must be completed in a single run.  Thankfully their size varies, from only a small handful of rooms to a long, winding trial.  Once all the smaller dungeons inside an area are completed, the main dungeon will unlock; once that’s completed, the players can progress to more complicated delving.  That being said, if the twins do fall during combat, they still retain the gold and experience they’ve accrued up to that point. 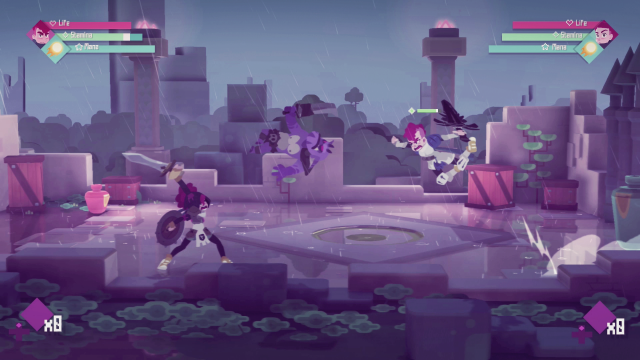 One thing I wasn’t wild about was the controller setup.  While X and Y on the face of the gamepad controlled strong and regular attacks, dodging and raising a shield were controlled with R2 and L1, which is a really weird button combination and was confusing to try to get right during all the frenetic action during the game.  Hopefully these keys can be remapped or they are placed on equivalent triggers, either L1/R1 or L2/R2.

While no platforms have been announced, the devs can confirm you can pet the dog, as well as a dragon.  Young Souls is expected to release in early 2020, so more details will be coming shortly for those interested in learning more.