After the release of the first Vaporum game in 2017, Fatbot Games decided to return to the Arx Vaporum with a prequel. Vaporum: Lockdown is a 3D first-person dungeon-crawler where the player controls only one character in real time, rather than a full party, and movement is crucial to surviving the harrowing experience. The result is an enjoyable game that has a charm of its own with its steampunk-inspired environments and overall eerie tone.

The game’s story takes off rather quickly. Ellie Teller is a scientist in a research facility, the Arx Vaporum, located in the middle of the ocean and devoted to the study of a newly discovered substance called Fumium. During a routine inspection, a series of quakes hits the Arx as the machines start to turn against the personnel. It is now Ellie’s job to find out what happened and get out of the facility alive. While the initial intrigue is quickly and effectively set, the story beats that follow aren’t particularly original and it’s not hard to figure out both what has happened to the facility and what will happen next.

The game has only a handful of brief cutscenes, so story information is gathered mainly from the written and audio logs scattered throughout the Arx Vaporum. While they do provide clear information of past events, they feel very much like they were planted only for the player’s enjoyment rather than something that a person in such a dire situation would actually leave behind.. Audio logs are also the main source of voice performances: most of them come across as convincing with some occasional dips in quality. None of the characters particularly shine though, since they come across more as deliverers of information rather than fully-fledged individuals. 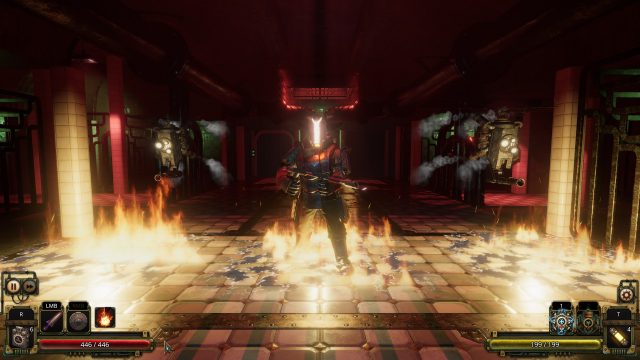 Dancing around multiple foes and hazardous terrain is needed to survive the toughest challenges.

These aren’t the only elements that lack in believability. The Arx is supposedly a research facility, and as such it is hard to believe that it would house contraptions like spinning bladed logs, hidden rising spears, and fire-spewing traps. These all feel like features that are poorly contextualized and put in place only to provide challenges to the player, rather than being elements that feel integral to such an environment. The game does try to explain some of these oddities in funny ways though, like with the presence of an employee that is into collecting bricks being the reason as to why there are so many all over the place. The in-game encyclopedia, called Arxpedia, instead focuses on lore tidbits regarding the enemies faced during the adventure, with convincing explanations as to what their function was before the incident and other information that helps in fleshing out the game’s world.

At the start of the adventure, players must choose between different kinds of exoskeletons built to improve the characteristics of the wearer. It’s an irreversible choice with different options: one of them improves durability, the game’s version of health points, while another makes the protagonist more proficient with weapons. The exo-rig is one of the many tools given to personalize the player’s experience and approach to the game’s combat system. This may seem like a daunting decision to be put when players aren’t familiar with the game’s nomenclature yet, but thankfully one needs only to hover with the cursor over a specific statistic to get a brief definition of what aspects of gameplay it affects.

Slaying foes grants experience which allows for continued improvement of the exo-rig through different skill trees. While most nodes grant an increase to stats, some allow unique effects such as bouncing a portion of incoming damage back to the attacker. Said nodes are also fully viewable right from the start, so that anyone can plan how Ellie’s rig will grow right from the start. The game’s pacing is excellent, and players will find a smooth flow of skills, equipment and gadgets throughout the storyline. However, since inventory space is limited, players will need to be selective in what to keep and what to leave behind. 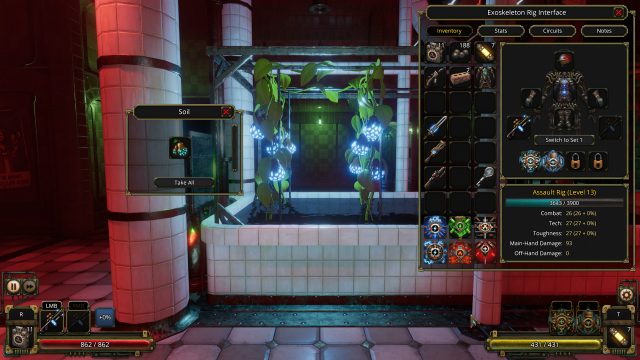 Puzzle-solving and gathering key items are required to get out of the Arx alive.

Weapons include melee options like swords and maces, along with ranged options including guns and rifles; each has different damage potentials and speed. A wide array of gadgets can also be attached to the exo-rig: some of them grant passive boosts to weapon accuracy at activation while others damage multiple foes with area-of-effect attacks; players need energy to use these special skills. Coupled with armor and accessories that may improve statistics like durability or energy restoration rates, the game offers many options for tackling all of the dungeon-crawling ahead.

The automatons and modified organisms that roam the Arx aren’t the only threats to be mindful of during combat: some degree of spatial awareness is required to triumph over the many gauntlets of the facility. Players must balance awareness of nearby pitfalls, dead ends, and aggressive enemies, which start with simple movement and attack patterns that become trickier and trickier as the game progresses. If the action gets too hectic though, a useful pause feature is just one click away.

Equally important to combat is puzzle-solving, and players will need to flex their ever-increasing pool of knowledge to noodle through the increasingly challenging quandaries. While most can be solved with enough time invested, mandatory destructible walls become obfuscated the deeper players explore the research facility, a weird choice given how evident cracked surfaces are during the first half of the game. The true brain teasers lie in optional puzzles, which conceal special weapons, armor, and permanent upgrades. The game has a menu that keeps track of how many secrets have to still be uncovered on a given floor, so that players can know exactly when the map has been picked clean. Vaporum: Lockdown also teases these locations with clues such as inaccessible platforms, so completionists should keep their eyes open for them. 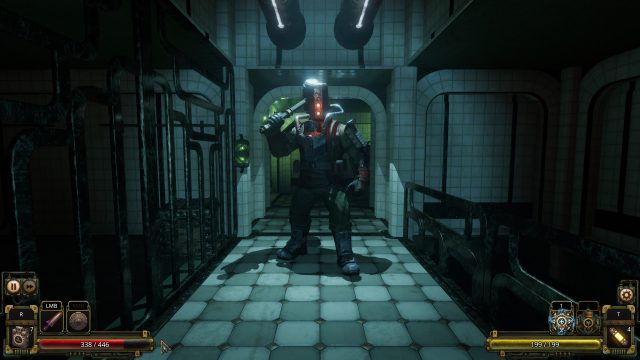 Both lighting and audio design pull their weight in shaping the game’s atmosphere.

The Arx Vaporum’s interiors, where Ellie’s adventures will unfold, allow for multiple kinds of areas that keep exploration from becoming boring. Starting locations feature simple metallic surroundings, while later locales have different features, like the Foundry’s pits of molten metal or Hydroponics’ white-walled corridors filled with poisonous gas. Each of these locations is realized with convincing attention to detail, especially regarding lighting. Sound design is also a high note of the game: the lack of music is compensated by the sound of whirring engines, stomping footsteps of nearby foes, and the distant screeches of foul creatures, all contributing to the eerie atmosphere of the game.

Vaporum: Lockdown is mostly aimed towards individuals that already have some degree of knowledge of the dungeon-crawling genre, but those who are dipping their toes in it for their first time can fine-tune their experience by selecting from five different difficulty options affecting combat encounters, which can be changed at any point. Puzzles don’t have such options, so players can expect their brains to be teased no matter the selected difficulty. Veterans can instead enjoy other minor adjustments that will make their adventure more challenging, like disabling the in-game tips and map in favor of a more old-school approach. The game is able to entertain both audiences for slightly less than 20 hours, not counting the time needed to discover all of the Arx’s secrets, including a completely optional floor hosting its hardest puzzles.

Players who are in search for a satisfying first-person dungeon-crawling experience will find themselves at home with Vaporum: Lockdown. Surrounding a somewhat by-the-numbers story is an enjoyable combat system that keeps a constant sense of progression and multiple puzzles that will test anyone’s mettle, all immersed in a steampunk-inspired setting. 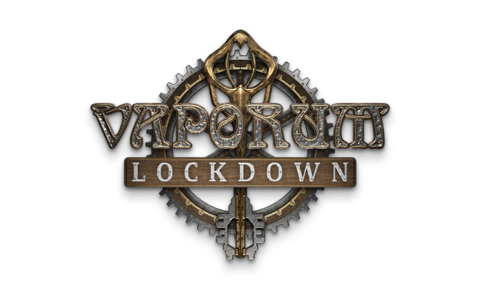