Rebirth of the Goddess

Though long considered a classic RPG of the PlayStation era, Valkyrie Profile was hampered by an extremely limited print run which prevented most people from experiencing its unique vision of Norse mythology. Valkyrie Profile: Lenneth is an almost entirely faithful port of that title, retaining the visual style, melodramatic voice acting, and fast-paced combat system, while adding in highly detailed CG cutscenes where appropriate. Time hasn’t been overly kind to the game – the errors in translation and occasionally cumbersome writing are even more evident in light of recent improvements in these areas – but its enthusiastically melodramatic charm still shines through. With a high-energy combat system, a unique classically-inspired world to explore, and an innovative take on RPGs as a whole, Valkyrie Profile: Lenneth is a worthwhile play for anyone interested in Norse myth or unusual RPGs.

In Norse mythology, a Valkyrie is a minor god tasked with selecting the most heroic of human souls to fight in the war of Ragnarok, a conflict in which the gods themselves are fated to be destroyed. This is more or less the premise of Valkyrie Profile: Lenneth. The player is cast in the role of Lenneth Valkyrie, the middle of three Valkyrie sisters, which, in this interpretation of Norse myth are actually a bit closer to the Fates, choosing who goes where and when after death. The game is separated into eight Chapters which are broken down into twenty-four Periods, which are depleted when the player enters a town or a dungeon. During each Chapter, the player is tasked with hunting down new heroes to collect and train up for eventual transfer to Asgard, to fight in the war of Ragnarok. Of course, getting these characters to join you requires that they first die, and the game is not at all shy about melodrama. Before each new character joins Lenneth, she is given a glimpse into their lives and the manner of their demise, a process which is seldom if ever pleasant. People in Midgard are subjected to the worst that cruel fate has to offer, from lost loved ones to despair-induced suicide to failed heroic quests, all of which inevitably end in the death of the most sympathetic characters.

In the end, Valkyrie Profile: Lenneth’s story is about despair, the pain of losing a loved one, and the innate human desire to save those who cannot be saved. The pacing of the narrative is a little odd, and the Chapter and Period structure of the game interrupts the flow of Lenneth’s story, but the game doesn’t always focus on her. In truth, the game feels a bit like a short-story collection, with dozens of smaller stories combining to produce an overarching tale. The main problem with the story, beyond the unusual pacing, is that the best of the three available paths through the game is the only one that makes any real sense in light of Lenneth’s personal history, but it’s nearly impossible to get without knowing how it’s done in advance. It’s a very satisfying and interesting tale, but the strict requirements levied on seeing everything the game has to offer can take one out of the experience and make suspension of disbelief difficult. 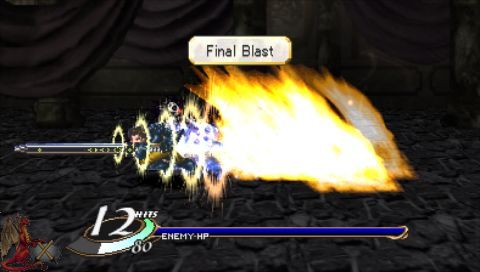 Each character has a unique and destructive Special Attack.

Combat is a fast-paced affair in which each member of the four character party is mapped to one of the face buttons. Each non-mage character can attack up to three times a round, either simultaneously against a single foe or separately against multiple opponents. Chaining attacks together to build long combos forms the basic premise of the combat system, a feat which requires an understanding of the way each character attacks as well as a significant sense of timing. It’s not without rewards, of course; each attack not only tacks on more damage, it also builds up the Special Attack Gauge. When the gauge is full, each character who participated in the combo can perform a special attack, which can be anything from a sequence of quick sword strikes to a huge, CG-animated Great Magic attack with the potential to wipe out an entire enemy party. The real kicker is that special attacks themselves build up the Special Attack Gauge, making it possible to cause huge amounts of damage by linking special attacks together.

The good thing about Valkyrie Profile: Lenneth’s combat system is that it’s fast, entertaining, and yet requires both concentration and a decent amount of tactical planning. The bad thing is that if combat lasts more than a half-dozen rounds or so, it risks becoming tedious and repetitive. Once a player has figured out a sequence of button presses that has each character connecting with the enemy and linking into a combo, there isn’t much reason to change things up until another character is shifted into the party. Thankfully, this happens quite often. Overall, the combat system is highly enjoyable, presenting an interesting balance between speedy real-time action and thoughtful turn-based tactics, but it does require the player to take an active interest in keeping things fresh.

Outside of combat, the game has a unique two-dimensional view which compliments the often platformer-esque dungeon layouts. The player is often required to make precise jumps and solve puzzles to proceed, a process complicated by the somewhat poor control. While basic movement and hit detection are well implemented, jumping is an imprecise and sometimes frustrating affair, with some of the more complicated jumps often requiring multiple attempts. The menu layout is a bit overcomplicated, requiring some exploration and experimentation to make full sense of it. The interface as a whole isn’t so much bad as poorly thought out, and though it does take a bit of time to get used to, it shouldn’t actually impede a player’s progress to any significant degree. On a more technical level, Valkyrie Profile: Lenneth is one of the few PSP RPGs in recent memory to break the trend of irritating and overlong load times. Though there is a slightly longer than average pause when opening the menu, voice clips and movies load quickly and smoothly. In fact, the only blemish caused by the transition from PSOne to PSP appears to be a slight blurring of the visuals when the camera zooms in small rooms and tight quarters. 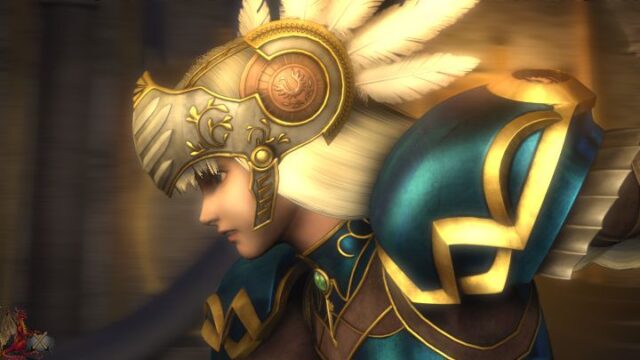 High-quality CG is the most major improvement in this port.

Valkyrie Profile’s soundtrack is characteristic of Motoi Sakuraba’s work as a composer, featuring high-energy, heavily electronica-inspired combat and dungeon themes. The somber town and event themes break this up somewhat, but the overall feel of the soundtrack doesn’t mesh terribly well with the feel of the game. As pure music, Valkyrie Profile’s soundtrack is one of Motoi Sakuraba’s finest works, showing off his unique style and energy to great effect. The voice acting, however, goes completely the opposite direction. The voice work is highly melodramatic and exaggerated, which fits the game quite well, but it’s also not particularly good. The actors get into their roles with an almost embarrassing level of enthusiasm, working the somewhat poor writing and translation for all it’s worth, but many of them simply don’t have the skill to make it work. The end result is not without charm, but the degree of seriousness with which the game takes itself could be a bit of a turn-off to some.

Valkyrie Profile: Lenneth retains the somewhat fractured visual style of the original game, using large character sprites and hand-painted portraits, with polygonal highlights and special effects. The game also adds in a respectable number of highly detailed CG movies, replacing the somewhat underwhelming cel animated opening and ending movies of the original. The new CG movies also emphasize key plot events, mostly in the A ending path, and add a few new loose ends to the story, which presumably will be tied up in Valkyrie Profile: Silmeria later this year. The only real complaint to be made about the new movies is the fact that they don’t use the same voice actors as the rest of the game. Overall, the visual style is well produced, if not particularly well thought out or implemented.

Valkyrie Profile: Lenneth features three difficulty settings, which influences what characters can be recruited and which dungeons the player will encounter, in addition to which endings can be achieved. The game isn’t terribly difficult on any setting, although training each new character from level one on Hard Mode certainly takes a bit more effort than normal. The difficulty setting also influences the game’s time to complete, ranging from 20 hours on Easy to upwards of 40 on Hard. With a large number of characters to train and use, and a huge optional dungeon to be completed, Valkyrie Profile: Lenneth offers a wonderful level of replay value.

In the end, what Valkyrie Profile: Lenneth does best is show a great deal of courage when it comes to basic RPG design. Swinging far wide of normal RPG conventions, the game offers a highly unique and creative approach to the genre. Of course, the game is not flawless, as it stumbles over some of the more fundamental elements of gaming in general, such as accurate jumping and menu organization. The game does offer a deep, involving storyline and an entertaining combat system, making Valkyrie Profile: Lenneth a solid choice for those looking for a challenging, complex game.