Square Enix has made some classic tactical RPGs over the years and its HD-2D visual style has proven attractive to players new and old, leading to a prime opportunity to take advantage of that history in Triangle Strategy.  In addition to the game taking advantage of some amazing visuals, its gameplay comes with a refined modern feel while evoking its roots in the tactical games of the past.  Its choice mechanic is groundbreaking and, with a few tweaks, has potential to be an amazing benchmark for future titles.  Battles are carefully laid out and provide challenge while not being too demanding, while the diversity of the cast gives each combatant the opportunity to be an MVP.  In short, Triangle Strategy weaves all of its elements into an immensely thoughtful and fun experience.

Triangle Strategy is the story of the prestigious House Wolffort and its dutiful heir Serenoa.  Serenoa is set to join an arranged marriage with Frederica Aesfrost to strengthen the ties between the Kingdom of Glenbrook and the Duchy of Aesfrost.  These two powers are joined on the continent of Norzelia by the religious state of Hyzante.  All three countries are set to usher in a new era of cooperation, but tensions are still high from the Saltiron War that engulfed the continent only thirty years ago.  Said hostilities broke out as a result of Norzelia’s resource distribution; Hyzante has access to the only known supply of salt, while the mountains of Aesfrost are abundant in iron.  Unsurprisingly, the promise of peace is short-lived and Serenoa’s choices are pivotal to how the resulting conflict plays out.  House Wolffort finds itself center to the success for each faction created by this new war and through Serenoa, players must steer Norzelia to a resolution.

Rather than heaping responsibility upon himself Serenoa makes use of the Scales of Conviction, where every member of his inner circle gets a vote, and choices are laid bare to everyone, with the majority ruling.  The sheer variety of choices makes it impossible to experience everything Triangle Strategy has to offer in a single playthrough, as players can try to influence their allies into voting in line with one of three Convictions: Utility, Liberty, or Morality.  Leading up to these decisions, Serenoa can explore the area and talk to NPCs and party members, potentially attaining information to help sway party members to the direction the player wishes to go.  How easy it is to sway party members depends on Serenoa’s points in the relevant Conviction, earned through conversation choices as well as numerous in-game actions.

Convictions are well thought out, but leave a feeling of a lack of integrity for certain characters.  The game sets it up so that the scales are largely balanced each time at the start of the choice with equal support on each side, with one party member undecided.  Players are asked to wrestle with some truly difficult decisions; as the war takes its toll on main party members’ psyches, they are forced to alter their views.  This leads to some jarring but satisfying character development, even for side characters, that will hit players in unexpected and harrowing ways.  Each story feels like a separate what-if scenario, with some moments shaping up similarly while others play out drastically different from playthrough to playthrough, making each ending worth experiencing. 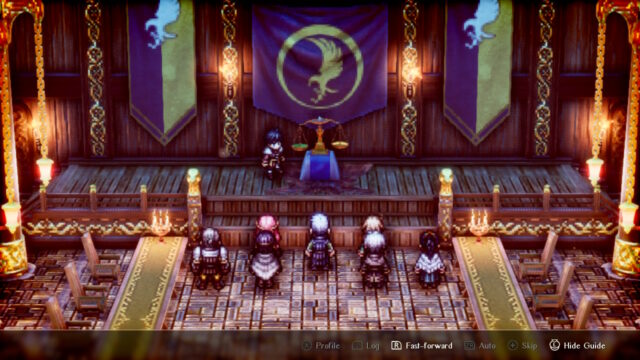 Time to face the Scales of Conviction.

While exploring, Serenoa can speak with two characters with green exclamation marks above their heads.  He will then be asked a question on a current topic with three possible answers.  These answers add to the score in Utility, Liberty, or Morality, along with the choices made during the voting sequences.  These aptly named Conviction points are unseen the first time through, but will be visible on subsequent playthroughs as they are needed to recruit some characters.  A few of the thirty characters require really high Conviction points, and certain others are locked behind story paths, but players still easily build up a sizable roster in their first playthrough.

Triangle Strategy is broken down into chapters, which generally feature a story event, exploration, and combat, with the possibility of a Scales of Conviction vote.  In addition to story battles, players can train up their units with mock mental combats.  These are also useful for gaining upgrade materials and other resources, but even with liberal use of the fast-forward button, they still take up a considerable amount of time.  This is because these battles do not scale with the player and all have a trick to them, which sometimes means dealing with annoyances like having to first climb a mountain to reach enemies while they safely rain down arrows and spells before units are able to gain experience.  Thankfully, game overs are very forgiving to the player as they can restart the combat if they’d like or go back to the main menu with all the experience gained in tow.  The downside to this is that items do not replenish, nor do the stocks refill often at the encampment, which limits healing options, while funds are easily depleted.  This at least makes each fight feel important, giving consequence to choice of how to proceed.

While the victory condition for most maps is defeating all enemies, others include protecting an NPC, disarming bombs, or escaping.  A lot of joy for each map comes from the variety in terrain due to the interactive aspects found within and enemy leaders feeling important and built up.  Climbable ladders, rideable mine carts, drawbridges, and primed bombs all add interesting wrinkles to scenarios.  Combat always feels difficult but never unfair, with various strategies available to help take down any boss or complete any timed section thrown at the player. 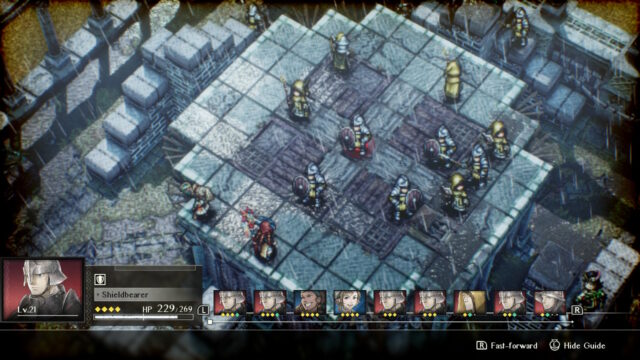 There’s just so much attention to detail and beauty on display.

Combat consists of picking a team of up to twelve, with some required and others recommended by the game.  The recommendations help players make wider use of the list of recruits as they delve into the game’s rich combat system.  Combatants gain one tactical point each turn, which are used for special skills. Deciding when to use powerful skills can be important, as running out of TP with a magic user when it is their turn means they are less useful.  There are plenty of strategies and tactical considerations to make, with players able to create double teams and follow-up attacks by flanking an enemy or taking advantage of higher terrain.

In addition to dropped spoils and currency rewards, players obtain Kudos from certain actions such as attacking from a higher elevation, maneuvering to initiate a follow-up attack, or targeting an enemy’s weakness.  This makes even positioning allies important and rewarded, truly taking the tactical aspect seriously and making each move matter.  Kudos can be used to purchase upgrade materials as well as additional notes and new Quietus skills.  Quietus skills are potential game changers, allowing players, if they have the points for it, to use a once-per-battle skill to great advantage.  These can range from bumping any ally up in the turn order to reviving a fallen ally, or simply guaranteeing a critical blow.  Quietus skills are very handy tools to help players in a pinch or just make things easier in a given fight.

Combat situations can vary simply due to the terrain.  Archers are best in places with an elevation advantage, and on maps covered in water, a lightning magic user can make the fight a breeze.  There are spell-casters covering every in-game element, with each spell able to affect terrain or enemy positioning.  Fire spells can set bush fires leaving places that deal extra damage, while ice freezes the ground to help make enemy advances more difficult.  Melee attackers also mix it up; lances can attack multiple foes, and some characters can push enemies back spaces with charging attacks, potentially knocking them off ledges.  Utility characters not only buff allies or debuff enemies, but also sway enemies to the player’s side and can even build ladders to reach high or low areas.  This variety in how to approach every combat means any combination of characters can be worked to player advantage making every fight more complex than it first appears. 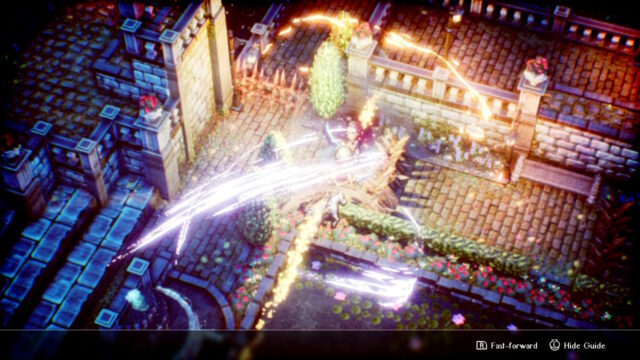 Roland dazzling with a destructive dash.

Characters are marked as individual classes in linear Rookie, Veteran, and Elite levels, with additional abilities unlocked with promotion.  Promoting a unit to Veteran or Elite requires a specialty item plus reaching level 10 or 20, respectively.  Additionally, each character has three weapon tiers, which are upgraded with a separate special item found during the story or bought with Kudos.  Each weapon tier also unlocks access to upgrades with increasing resource costs, which grant bonuses to stats, alter learned skills, or even teach a powerful ability at the highest tier.  Between the class system and the weapon selection, each character fills a niche that only gets more refined with each level.  This niche gives every character the ability to become the star of a fight if the opportunity arises, and encourages players to remain flexible with their party selection.  With each class and weapon upgrade, the sprite changes on-screen, with little details that are wonderfully captured.

Visually, Triangle Strategy is a beautiful game, living up to the HD-2D roots. Every character is polished and lifelike, and the backgrounds present like a pop-up book.  Special consideration must be given to the water effects, which are some of the most stunning and realistic yet seen on the Switch.  Special abilities bring in different colours and effects to make each usage a spectacle.  The incredible attention to detail ensures there’s something in each scene to be admired for those looking to soak it all in.  Musical accompaniment fits the mood, with no tracks standing out on their own, but add to each experience.  Voice acting has its moments, with some lines coming across as wooden, but others adding gravity to the situation and making those characters stand out more.

Triangle Strategy has hit the ground running, setting a new standard for tactical RPGs.  With a nearly perfect conviction system that adds spice to every conversation, it rewards players who take the time to explore the world and its inhabitants.  The game is breathtaking to view as well with care added to everything.  It features characters that grow and evolve, sometimes in unexpected ways, with the world around them.  Add to that an amazingly deep, strategic combat system that allows every character to be the star of a fight while being less useful in others and there’s a lot of variety in how to approach every scenario.  Fans of deep lore, choice-driven storytelling, and plenty of strategy will be enchanted by how their epic unfolds in this tactical masterpiece.