The World Ends with You: Final Remix Review

The World Ends with You recently celebrated the ten-year anniversary of its initial release on the Nintendo DS, and Square Enix and Nintendo are giving a new generation of players the opportunity to play the game of life or death in a parallel version of Shibuya on Nintendo Switch. The process of putting the game on Switch was made simpler with the game having already been ported to single-screen touch devices on iOS and Android, but The World Ends with You: Final Remix has been made even more appealing by some new additions, including co-op for its TV and tabletop modes, remixed and new music tracks, and a full post-epilogue chapter that offers some interesting variations to combat. Though it still suffers from some familiar issues, The World Ends with You remains an easy recommendation for new and returning players alike with its excellent character development and very appealing sense of style.

TWEWY follows Neku Sakuraba, a young man who finds himself participating in a game of life or death in the Underground, a version of Shibuya running concurrently with the real-world. Only those participating in the game — the Players who are attempting to survive and the Reapers who are tasked with eliminating Players using summoned beings called Noise — can see each other, with the Players required to complete a certain mission sent to their phones each day. Failure to complete the mission, or defeat at the hands of the Noise will result in the Player being erased from existence. Each game lasts a week, with only those who make it to the end being given the opportunity for survival, and Players must find a partner, as the way that fighting back against the Noise works ensures that those left on their own will face quick erasure.

The game follows a chapter structure as Neku finds himself involved in multiple games, each chapter covering a particular day in the game, with the overall story lasting around twenty-five hours. Missions generally require that Neku and his partner for the game head to a specific location in Shibuya, often finding roadblocks along the way manned by generic Reapers who will require that the duo accomplish a specific goal such as finding a certain item or defeating particular Noise. 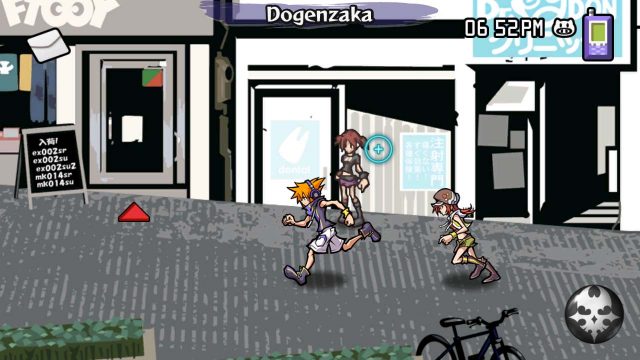 The World Ends with You’s version of Shibuya looks great.

Since the Switch only has a single screen, Final Remix utilises the controls and battle system of the touchscreen mobile version of TWEWY, with the pointer from the Joy-Con acting as the player’s finger in tabletop and TV modes. Neku is moved around by simply dragging him via finger or Joy-Con cursor, with various gestures — such as slashing an enemy or tapping empty space — activating his equipped pins for attacks and other skills. Up to six pins can be equipped by the end, though for most of the game players will only have three or four slots unlocked. Equipping a complementary set of pins is highly important; there are an awful lot of pins to find and one of the game’s annoyances is that a lot of these prove to be useless, primarily through how difficult they are to use effectively. Certain actions are simply not practical to do in the thick of combat, so players will find it necessary to ignore whole groups of them. The touchscreen controls are generally fine and clearly the ideal method of playing the game as opposed to the limiting factors of using the Joy-Cons, but annoyances will crop up every now and then. It feels like a controller-style option could’ve been included and though it doesn’t take long to get used to the controls, there will be accessibility issues for some because of it.

On top of using attacks from pins, players can also call their partner into the action with a dedicated gesture. Going back and forth between pin and partner attacks is highly advantageous for players, as this will build Neku and his partner’s sync rating, with a 100% rating allowing a special attack to be activated. This attack is accompanied by a quick mini-game unique to the partner — for example, Shiki asks that players select the corresponding pair of symbols displayed on a set of cards — and adds a multiplier to the arena-wide special attack that results. Building up a sync rating and managing to unleash a powerful special attack is immensely satisfying, and on the whole combat is enjoyable and exciting. For those who found the DS version’s combat a bit too complicated, Final Remix’s battle system strikes a nice balance between being easier to follow while keeping the overall style.

There are multiple ways to upgrade Neku and his partner’s attributes and attacks. Many equippable pins will level up as they are worn, while players will steadily come across more powerful pins as they progress, either dropped by enemies, given as rewards, or bought from shops. There are also various articles of clothing can that be bought from shops. The shops also provide an impact on the combat system, as pins are associated with these shop brands and the most popular ones receive significant power boosts. Players are able to manipulate the popularity ranking of the part of Shibuya they are in by wearing and using brands in combat. 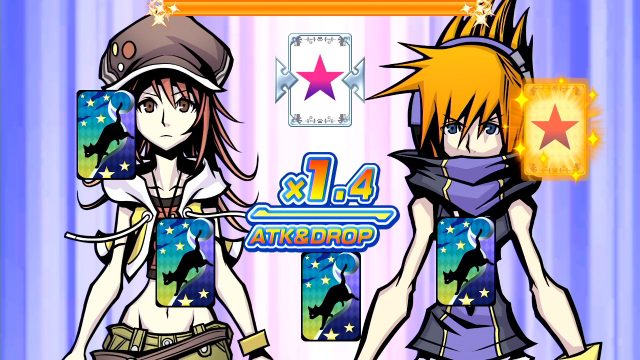 Partner attacks are very helpful for getting out of a tough spot.

TWEWY also offers a neat touch in its adjustable difficulty. Easy difficulty is unlocked fairly early on, with Hard unlocked later, and Ultimate purchased from a store after clearing the game. Difficulty can be switched at any time with no impact on progressing the story, but playing at different difficulties unlocks different drops from the various Noise. Players can also choose to reduce Neku’s level and chain a series of fights together, both of which provide bonuses to the drop rate of enemies. TWEWY’s layers blend together nicely, with the game doing a good job of introducing its various elements as well as appreciably letting players pay as much attention to the various elements as they wish. The array of options gives the more challenge-minded players the opportunity to create them in abundance, as well as letting others focus more on the story.

Thankfully for those wanting a strong narrative, The World Ends with You has it. The overriding mystery behind the game, and those supposedly in charge of it, does a great job driving the plot, but the main highlight of the game comes in its character development. Neku moves from being a dismissive loner to appreciating the relationships he builds with his partners and others, with virtually every other character in the game also showing lots of depth and growth. The pace is generally nice and snappy as well, though there are certain missions that appear to only serve as padding, slowing things down unnecessarily as players spend the day diverted by what amount to meaningless tasks. Outside of these few missions, however, the storytelling is great, with the characters and their development, the mysteries of the plot, and the setting of Shibuya itself coming together highly satisfactorily.

Once players have completed the game there is still a lot to do and find. Players are able to go back to any chapter and complete various challenges to unlock secret reports that provide lots of extra backstory for the game and a few key characters in particular. There is also the Another Day chapter set in an alternate world and heavily based on the Tin Pin Slammer mini-game that can otherwise be ignored. For returning players, however, the big addition is the A New Day post-epilogue chapter. This is unlocked by beating three specific optional fights found in the main game and sees Neku and Beat sucked back into the Underground with a new character named Coco. This new chapter puts a fascinating new spin on the story, but never purports to provide answers to any lingering questions. Instead, it really serves to provide more questions over the course of its three or so hours and will leave players highly intrigued as to what the future holds for the series. A New Day also puts some interesting new aspects on top of combat, adding elements like Noise that multiply if not defeated quickly enough as well as a curse that slowly drains Neku’s health. This does come at the cost of making the chapter a bit more difficult to get through than the base game, joined by some more stringent requirements to unlock obstacles, as well as a scrambling of the map of Shibuya. 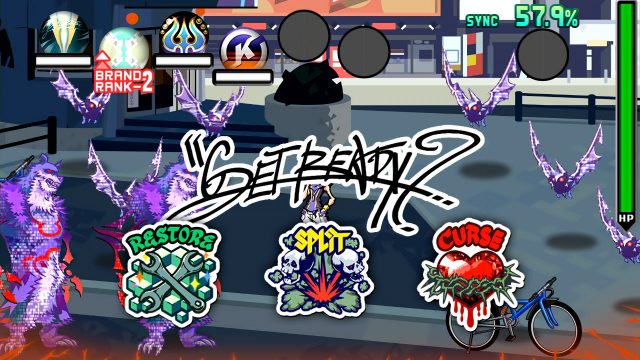 A New Day brings some extra quirks to combat.

Backing up the narrative is a strong presentation, both in visuals and audio. There are areas where things could be better; the conversation between character portraits is sometimes not quite expressive enough for the situation and tapping through it becomes a bit dull at times, background NPCs are often blurred, and the lack of voice acting outside of battle cries and some brief moments is a disappointment. Nevertheless, The World Ends with You is enjoyable to behold as it brings to life its cartoon version of Shibuya and its various landmarks. Takeharu Ishimoto’s excellent original score that combines pop, hip hop, and rock is appreciably added to with new remixes plus a few fresh new tracks thrown in as well.

For those who missed The World Ends with You originally, the Nintendo Switch version is a great way to see what all the fuss was about. Its gameplay, style, characters, and story are still perfectly fresh even ten years following its original release. Meanwhile, those wanting to try it again will find plenty to like about its adjusted gameplay and particularly some of the new ideas brought about in A New Day. The new conclusion doesn’t offer the answers to story questions that existing fans will have, but if Final Remix provides the success the game deserves, perhaps those answers will come.