Time Is an Illusion (Lunchtime Doubly So)

Amnesia is a common RPG trope. However, most games put its appearance at the start of any adventure, giving the afflicted party ample time to come to terms with it. Syupro-DX and Nippon Ichi’s The Longest 5 Minutes sees our hero on the receiving end of a bout of amnesia right at the final boss instead. Naturally, this is not an ideal time for it, and the party is left scrambling trying to get its leader to recall his journey — and more importantly his abilities — while avoiding being wiped out at the same time. What results is a pleasant surprise. The Longest 5 Minutes provides an engaging tale, with a premise that stands up throughout thanks to its quick pacing, albeit with unchallenging RPG gameplay at its most basic.

The game starts with our hero, the not-so-subtlely named Flash Back, staring at the Demon King wondering what is happening. As he and his allies figure out the troublesome situation, they start attempting to remind of him of what they are doing and how they got where they are. From this point forward, the game flips between flashbacks to the party’s journey and the events of the battle itself, the latter featuring a timer in the corner counting up (not in real-time) to the titular five minutes as the events unfold. The battle with the Demon King itself takes more of a visual novel format, with Flash occasionally given options to choose. Though these options may change some subsequent events in the battle and supply some extra flashback scenes, they won’t affect the ending, with just a couple of actions in the last twenty seconds being what determines which of the three endings players get; those who wish to go back and see them all simply need to maintain a save file from just before that point.

The adventure itself follows the classic RPG template — Flash is the kingdom’s designated hero, sent on a mission by the king to investigate a mysterious fog and the demons appearing from it in another land — but the flashback structure allows The Longest 5 Minutes to cut out all of the fat. Each flashback features the conquering of a single dungeon or a few relevant story scenes, such as Flash meeting his allies to set off on his adventure, or one of his allies learning their special move. Though it is a straightforward adventure in a generic world, the fact that players are darting quickly between events means that it never gets dull. The dynamic between the events of the boss battle and the memories Flash recovers works very well, while the writing during the combat with the Demon King conveys the panic and the slowly-returning camaraderie of Flash and his friends superbly. The game is further aided by characters that grow throughout the game and with a fine localisation from NIS America, it all comes together in a satisfying manner. 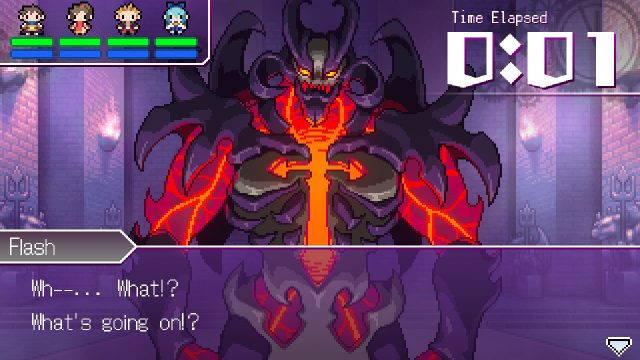 That’s not an encouraging sight to wake up to.

The Longest 5 Minutes uses a very basic turn-based combat system, with options for regular attacks; offensive, healing, and supporting magic spells; items; guarding; automatic control; and running away. A command is given for each character, with combatants going in order determined by a mixture of their speed and the action performed; those doing healing or special moves will usually go first, for example. Random battles occur fairly regularly, but not annoyingly so, though there isn’t very much variation between enemies.

Though item and equipment stores are present, the game’s rushing between key points means that things picked up aren’t carried over to the next one; the game simply assumes they are used or replaced in the intervening time. The same applies for cash and magic spells, which are provided automatically, and of course as The Longest 5 Minutes takes place during the final boss battle, all party leveling has already happened, with the character level just providing a handy note for when each event takes place chronologically. Instead, The Longest 5 Minutes uses re-experience points and associated levels, which add some extra boosts to the party’s attributes.

The game has an incredibly easy balance, however, so grinding for re-experience points is not something that needs to be considered. Virtually all regular battles can be won by spamming the regular attack button, with occasional healing needed between battles, which can be done with just two quick button presses. Bosses will require a bit more thought, but even then it simply amounts to using the more powerful attacks or magic and healing when necessary. Status effects are present but come up rarely and can generally be ignored unless enemies get particularly lucky with how many members they hit. Only once during the playthrough was an MP replenishing item used, and even that didn’t end up being necessary. 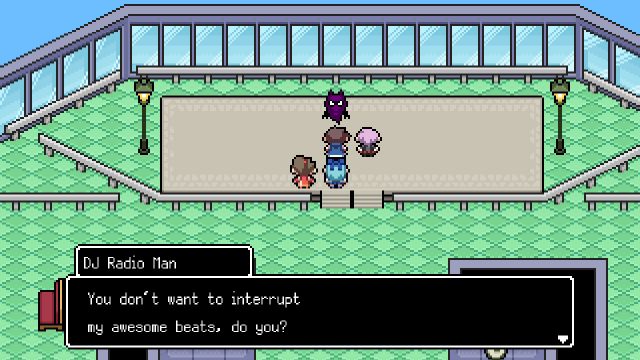 There are various optional things to do within the adventure sections, including some mini-games. Many of the flashbacks have additional optional tasks that will provide extra re-experience rewards and trophies on those platforms that have them. Meanwhile, the dungeons are quite interesting to explore, with enjoyable pathfinding puzzles and plenty of (temporary) equipment rewards for those who explore all nooks and crannies. The last few dungeons are a little longer than they need to be, but the designs of the dungeons throughout is generally appreciable.

The Longest 5 Minutes‘ visuals and music are in keeping with the retro-styled adventure and are generally quite pleasing. The sprite work and pixel graphics feature some nice little touches. Locations and the world map aren’t at all interesting, but this is another area where the quick pace of things prevents them from becoming tiresome. The soundtrack is a strong but not spectacular entry, providing tracks that evoke the feel of classic JRPGs and are enjoyable to listen to.

There’s certainly an argument that The Longest 5 Minutes could be considered more of an interactive visual novel than an RPG, but it’s a good one. Though the gameplay is very basic, the events and dungeon-crawling sections do enough to convey the actual adventure, and it ties in nicely with the events of the final battle. The game plays to its strengths and mitigates its weaknesses well, providing an enjoyable experience that feels more involving as the timer ticks along.