The Legend of Heroes: A Tear of Vermillion Retroview

Where Nobody Knows Anything’s Name

Falcom’s The Legend of Heroes series hasn’t had the easiest time of it in the West. First appearing in English on the PSP, Bandai released a trilogy of games that were lambasted for poor localisation efforts. However, in 2011 it seemed the series might get another chance when Trails in the Sky won over many fans thanks at least partly to a wonderful localisation from XSEED, but alas apparently not enough to make bringing over any further entries worthwhile. The Legend of Heroes: A Tear of Vermillion, the first game to be released by Bandai in 2005, will likely not be a sufficient tide-over for those RPGamers brought into the series by Trails in the Sky and still hoping that further entries in the series find their way over. The charm is still present and it’s interesting to see some features before they were polished up for Trails in the Sky, but an awful localisation and generally uninspiring gameplay mean that every plus point is accompanied by at least one minus.

A Tear of Vermillion is actually the second game in the Gagharv trilogy and a remake of the original game released initially for PC in Japan in 1996. Confusingly, the PSP remake of the first game was later released in the West as The Legend of Heroes II: Prophecy of the Moonlight Witch, although fortunately both games work perfectly well as stand-alones. It follows the journey of Avin, Mile, and a constantly rotating group of allies as they search for Avin’s sister Eimelle. The group was separated when the Cathedral of the Bardus Church, where they had been raised in as orphans, came under attack from a group called Octum’s Apostles. After some years spent under the tutelage of Sage Lemuras, where he became friends with the local boy Mile, Avin sets out on a journey to be reunited with Eimelle with Mile in tow. 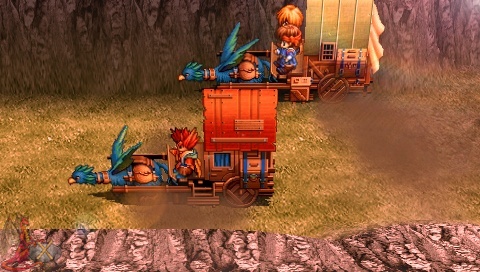 Who needs the sport of kings when you have these?

The story is one of the key draws of The Legend of Heroes games, and unfortunately it suffers greatly from an appalling localisation. That said, however, it is a testament to how much charm Falcom have managed to put into the game that it still manages to shine through. The end result is a feeling of a great tale being poorly told. The characters all retain a great deal of likeability despite the butchered dialogue. Despite this, there can be no getting away from the sheer number of grammatical errors and inconsistent spellings (particularly on a few certain plot-important items) that point to a serious lack of effort on the part of the translation team. It’s disappointingly apparent that this was a very rushed job and hard to believe that most of the glaring errors would’ve passed through QA without higher intervention.

Battles and overall gameplay are acceptable but not particularly interesting. The game features a fairly standard turn-based battle system mixed with some strategy elements where characters are able to move around the battlefield. Characters have skills to use also, each with finite ranges and areas of effect. Enemies appear on the field map in lieu of random battles, although they are generally very aggressive and can be difficult to avoid. Thankfully, they will start to run away once the party becomes powerful so the frequency of battles does fluctuate, but it can be frustrating, particularly on the longer or tighter sections of travelling. There is a limit-break style gauge that builds up as characters attack or get hit, which players can save up and unleash for a considerably more powerful attack. These are generally quite overpowered and using them makes almost any battle, including bosses, trivial (with the exception of a very annoying final boss). In item and skill use the localisation again fails to help, by providing names that are unclear or counter-intuitive, such as Reincarnation being an offensive spell, further exacerbated by the lack of any descriptions available during battle.

Equipment follows the bog-standard system of buying and wearing more powerful items whenever a new town is entered. There are in fact two distinct types of money, with enemy drops being distinct type from that used by the world’s stores. However, the fact that all players can do with their monster cash is swap it into the kind of money that actually buys things makes this endeavor rather pointless. Outside of frequent back and forth travelling, there are a few sidequests to break things up, although these mostly revolve around finding various NPCs or collecting and reading books about the world, which unfortunately again relies on the quality of the text. One interesting system that the game introduces is a pet system. Avin will have a pet that follows him around and can convey bonuses at the start of battle depending on its mood. For example, a happy pet may boost defense while an angry pet may damage enemies. Players can adjust their pet’s mood by praising, scolding, or feeding it, and it will repay the player for looking after it by frequently replenishing healing supplies, so much that the player likely won’t ever need to shop for them. 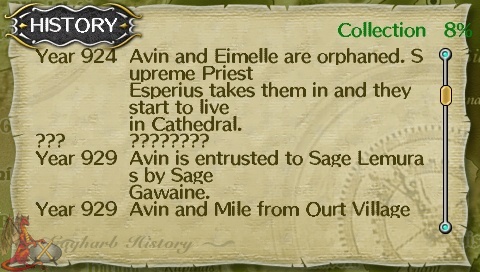 Historians are at least agreed that something happened at some point.

The sprite-based visuals are really nothing special. They do the task required but there’s nothing particularly enthralling about any sight in the game. Thankfully each town gets a distinct design and building style, ensuring that things stay fresh on that front, although some field locations and dungeons can become a bit monotonous to travel through. Musically, the game also does a passable job with enjoyable but highly forgettable tunes. It’s another couple of areas where it becomes apparent that Falcom are just beginning to find their feet ahead of considerable improvement for later games.

Those who enjoyed Trails of the Sky may enjoy finding facets of that game in A Tear of Vermillion, be it through the overall charm or spotting certain themes and aspects that would make further appearances in the series, but even then it’s still very difficult to recommend. One can only wonder how much more enjoyable the game could’ve been with a proper localisation with it feeling like a missed opportunity for RPGamers. Fortunately for all, Falcom found another Western publisher willing to give Trails in the Sky the love and time it deserved, but sadly a well localised Legend of Heroes game could well turn out to be a singular occurrence. It certainly won’t be found here.