Continuing the pleasant surprise that is the Wii’s RPG swan song, The Last Story is a most welcome follower in the footsteps of Xenoblade. Mistwalker steps away from the turn-based systems that many will associate with the company and other works of its founder, Final Fantasy creator Hironobu Sakaguchi. Instead, The Last Story slots itself firmly into a more action-oriented position, helped by a constantly moving story and fast-paced, always flowing boss battles. While it may not quite keep up with the originality and superbly crafted world of Xenoblade, The Last Story still grants a memorable experience in which the majority of RPGamers should find plenty of enjoyment.

The majority of the game takes place on Lazulis Island, a stronghold for the human empire that is frequently involved in the battles against the Gurak, another humanoid race. With a couple of brief exceptions, players take control of Zael, one of the leaders of a small band of mercenaries who harbours dreams of becoming a knight. The game is divided into over forty chapters, each chapter generally signifying a particular dungeon or series of related events. A fair few chapters give players the opportunity to investigate Lazulis Island and partake in various sidequests. Individual chapters are for the most part fairly short, the vast majority punctuated with a boss battle or important story scene.

The battle system keeps a brisk pace, and makes heavy use of Zael’s Gathering ability, which is gained very early in the story. Gathering allows Zael to attract enemy attention onto himself, giving other party members the opportunity to cast spells, attack opponents unhindered, or escape dangerous situations. Magic in The Last Story leaves circular zones after being cast and grants special effects to those standing within, such as providing constant healing or adding an element to physical attacks. Zael also has the ability to break the magic circles of both friend and foe, which causes an extra effect, either hindering enemies or buffing the party. The choice of when to use Gathering or to break magic circles is entirely up to the player and being too overzealous in their uses can easily put Zael and his comrades on the back foot. 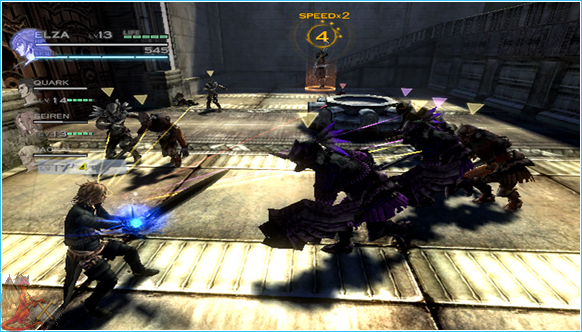 Don’t worry guys, I can handle them myself. Honest.

Party sizes can be anything up to six-strong, although the exact number is entirely dependent on what part of the story players are in. Each member gets five lives for every battle, is automatically revived after a certain time even if Zael is unable to reach them, and are only fully incapacitated once all lives are lost. Players can pause the game when a meter is filled to tell party members to use specific skills, but the AI can generally be relied on to fight smartly. Most of the need for managing characters’ skill use is reserved for the latter stages of the game after the most powerful skills have become available. In addition to his other abilities, Zael can arm his bowgun and enter a first-person mode. While in this mode Zael can fire arrows at distant and potentially otherwise unreachable enemies. He can also take advantage of the environment by spotting specific areas, such as a weak roof support, and can then bring it down himself or instruct a comrade to do so. This added level of strategy adds further depth to what is already one of the more exciting and original systems of the past few years.

Where the battle system really comes into play is in the game’s many boss fights. Each chapter will usually contain at least one boss fight and a great deal of effort has been made to ensure each is unique and requires differing methods to take down. There is, however, an issue regarding the frequent lack of challenge present. The majority of run-of-the-mill battles will rarely cause much trouble, and as long as players can figure out a good tactic, even bosses tend to go down all too quickly. The overall enjoyability and entertainment of the battle system goes a long way to alleviating this concern for many, but those who play RPGs for the challenge may come away disappointed. Save points are plentiful, with checkpoints also liberally spread around, so even if players find themselves overwhelmed by a battle, it’s never much of a setback.

Players have an impressive level of control over character clothing, and are able to choose both the colours and which specific armour parts are visible. The upgrading system is pretty simple and loot is readily handed out, but it does give a good feeling of the characters’ advancement as each upgrade results in more impressive-looking armour and weaponry. The multiplayer allows players to take any one of their party members (including equipment) into either co-op battles against a small selection of bosses or competitive deathmatches against other players. While a couple of the bosses are fairly trivial, others provide the challenge that the single-player portion lacks, especially if the party isn’t on the same wavelength. Defeating a boss or placing in a competitive round rewards players with unique items or materials that are taken back into the single player game, giving a decent enough reason to at least try it out. The multiplayer isn’t really substantial enough to be a major selling point, but it’s a nice optional extra to have.

If playing straight through the main story, the game can be completed in around twenty hours. There are, however, numerous side-quests and a few optional chapters that bump the overall time to around thirty hours. The majority of sidequests are nothing extraordinary, but the optional chapters are very good supplements to the main story and provide more welcome interaction between the characters. Despite being relatively short as JRPGs go, this length is a good fit for The Last Story. The result a lack of unnecessary fluff and a plot that keeps moving, never getting bogged down. 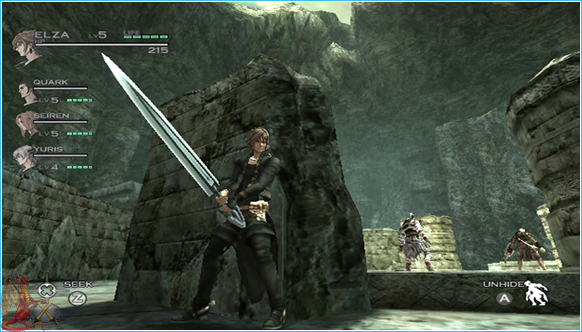 Zael may be well hidden, the big sword on the other hand…

Another excellent localization from Nintendo of Europe really brings the characters and story to life. Like Xenoblade, the voice acting is excellent, and the array of British accents are a great fit for the setting. Zael and Calista are very likeable as the two leads, although it has to be said that Syrenne and Lowell manage steal pretty much every scene they appear in. There is a heavy use of JRPG clichés but, instead of suffering from it, The Last Story gives an effective showing of why they became clichés in the first place thanks to the great writing. The supporting cast balances the main characters nicely throughout, each being given an opportunity to take centre stage where appropriate. Keeping the story confined to mostly Lazulis Island plus a few other places may leave some wishing more time was devoted to the wider world, but the trade-off is that it gives the opportunity for a great fondness of Lazulis Island to develop, as it very much becomes home for the duration of the game.

The Wii’s technical capability is clearly pushed to near its limit by The Last Story, which unfortunately sometimes shows as a reduced frame rate during the more chaotic parts of battle. Detail in the character models is also not the best, and those coming into the game expecting a PS3 or 360 level of graphical prowess may find the relative lack of detail a bit jarring. Despite the limitations, Mistwalker has done a good job keeping the overall visuals pleasing to look at and keeping players’ surroundings interesting. Lazulis Island’s residential areas are bustling and the architectural themes remain consistent throughout. The music is very strong from beginning to end, although it perhaps doesn’t quite reach the very top level of Nobuo Uematsu’s most acclaimed scores. The most memorable tracks are still right up with the best of them, however, and the soundtrack works very well with the overall visual and story themes.

Despite criticisms that it doesn’t bring JRPGs to the next level in the same way as Xenoblade, there is still a lot going in favour of the The Last Story. The battle system is one of the most enjoyable in recent times, with an excellent level of depth, and the story, characters, and excellent localization all play their part raising the game. The Last Story’s preferred focus on combat and characters puts it far enough apart from Xenoblade, with its focus on exploration and the wider world that there’s more than enough space for both games to carve out their own identities and stand proudly together.