The Land of No Faces

After Quintet’s numerous Super Nintendo adventures, the company survived through the early PlayStation years before going bankrupt. The PlayStation era may not have been kind to the company, but The Granstream Saga showed that Quintet hadn’t changed its game-making procedure much. Granstream Saga looks like the early PS1 release it was, but has plenty of connections to the trilogy started by Soul Blazer on the SNES.

The Granstream Saga begins with an animated clip displaying the severance of part of a floating landmass. This removal of real estate is intentional, since the floating island is losing its magically-granted buoyancy and will crash into the ocean. The root of this problem lies in a war fought one century earlier, in which most of the world was flooded and four islands were raised into the sky as a means of allowing some to survive. Keeping each of the islands aloft was the job of their respective Wise Men, who have gone missing in recent years. A young man named Eon, with a mysterious scepter on his arm that magically reconstructs objects, finds himself tasked with raising the world’s islands and clearing out the forces in the way. Eon needs the help of Arcia, the only surviving descendant of a Wise Man, to accomplish this task.

The tangents which Granstream‘s plot follows are widely varied, including the lure of an exclusionary religious cult, reincarnation and the memories of souls, and the justification for using might to rule. Coming within such a short game, one which can probably be completed in less than ten hours, the sheer amount of material Quintet’s writers included doesn’t get anywhere close to the screen time it might have warranted. THQ’s translation is loaded with typos and iffy grammar, though it at least keeps the proceedings interesting instead of impenetrable. Though it definitely has problems, The Granstream Saga‘s story succeeds in never getting boring, thanks to its frequent shifts in focus and relatively effective treatment of everything it addresses.

Visible while wandering through the dungeons of the game are various enemies, many of which Eon must eliminate in order to progress. Granstream‘s combat is rather reminiscent of a 3D fighting game with no option to jump, but unfortunately its other controls are not up to the efficiency a fighting game demands. Every battle is a one-on-one affair in which both sides can block attacks. Eon automatically faces the enemy, but requires a moment to change his focus whenever the foe’s position shifts. 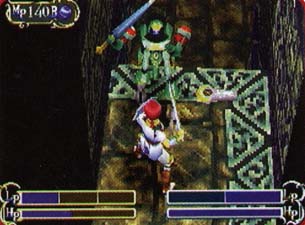 These enemies and their damned shields, blocking every attack… get used to it.

There are exceptions, but the general rule of combat is that Eon will be slower than the enemy he faces. Double-tapping any direction will make Eon dash, but he can only sustain that speed when going forward, and in any other direction simply makes a quick hop before reverting to his usual sluggish walk. The best method to win is blocking enemy strikes, and then counterattacking as able. Occasionally even this tactic results in pain, since the precise timing required for a strike is sometimes undone by Eon’s attack animation being just a touch slower than the enemy’s assault. Slowing Eon down even further is the game’s characteristic of knocking down the combatant that just lost a significant part of his health, and this tends to be the player because enemy attacks are usually the more powerful. Enemies also tend to have good defense, dragging fights out even longer.

The best way to avoid all the annoyances of fighting an enemy in close quarters is to retreat and use magical strikes, but this brings up its own set of issues. Eon’s health is replenished by the save crystals found in the dungeons, but his magic points can only be regained by using items, or by getting lucky after beating an enemy and being granted some restored mana. This makes using magic constantly an iffy proposition, since the resources for it are harder to come by. In such a situation, running away might be a useful option, but Granstream Saga has no means of escape once a battle is joined. All of these issues are certainly aggravating, but at least the game is very generous with healing supplies, in the extremely likely event that Eon will need them.

The dungeons themselves are well-varied, especially considering the game’s length, offering new environments to experience. This makes the horribly repetitive nature of the enemies within those dungeons even more egregious, since fights against the same two or three antagonists plague exploration. Palette-swapping is rampant, but since there is no text during battle to identify the opponent, figuring out the difference between some of the similarly-colored foes is a matter of trial and error.

The Granstream Saga‘s interface is swift and unobtrusive. New equipment is easy to put on, which is fortunate since it is almost always superior to the current lot. As a means of covering the load times that were prevalent at the time, the game displays the location to which Eon has just moved, which is certainly preferable to a black screen. While The Granstream Saga‘s menus will fool no one into believing it was made recently, they are very efficient when compared to other games of the same era. 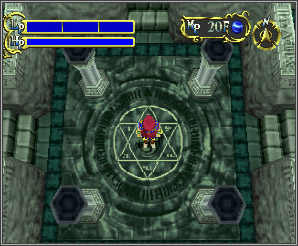 This has to mean something, though exactly what I’m not sure.

Quintet made the interesting decision to use no faces on the character models. This may have been for the best, since PS1 character models in the system’s early years have aged badly when viewed today. The Granstream Saga is certainly not a game that transfixes anyone with its beauty, but its visuals are kind enough not to zoom in overmuch and assault the player with their jagged polygons. Eon’s battle figure also changes based on his equipment, which is interesting to observe. While not a testament to the polygon-processing prowess of the early PlayStation, this game manages not to offend the eyes as much as some other early entries on the system.

Considering its length, Granstream‘s musical variety is impressive, with a soundtrack that would easily accommodate a much longer game. Quintet’s veteran composers Miyoko Kobayashi, Takako Ochiai, and Masanori Hikichi join with the venerable Kouhei Tanaka to create a soundtrack that is a definite highlight of the game. The audio incorporates some voice acting of quality low enough to make Audio Atrocities notice it. Its presence drags down the overall sound quality.

Rebuilding a world is very much in keeping with the SNES games Soul Blazer, Illusion of Gaia, and Terranigma that Quintet made. The unfortunate decision to try something different with Granstream‘s combat is what makes the game stand far apart from its spiritual brethren, and slogging through the many hindrances of its battles is a trying task. Almost every other aspect of the game is at least interesting, however, and overly ambitious stories are preferable to those content with underachievement. The Granstream Saga is tough to unreservedly recommend, but doesn’t deserve the dismal reputation reviews at the time gave it.