Who Keeps Atlantis Off the Maps?

Big Bad Wolf and Focus Home Interactive’s The Council offers an intriguing spin on the adventure game formula, introducing numerous RPG elements to add in a sense of character building. Released as five episodes across the course of 2018 and using an interesting semi-historical setting to good effect, it provides an entertaining experience across its twelve or so hour length, though it has some foibles coupled with a swerve in plot direction that gives pause for thought. While those issues prevent it from going down in history, it’s one that adventure game fans should find worth checking out.

The Council puts players in the role of Louis de Richet, a young man who is part of a secret organisation called the Golden Order along with his mother Sarah, who is its leader. Louis has various skills he can make use of in conversations and investigations, and his initial strengths are up to the player, who can start him out with a particular focus, such as being adept at detective-related skills. An initial prologue introduces the conversation and decision systems, as well as potential permanent consequences of those decisions, with Louis possibly receiving a large scar on his face that persists through the course of the game.

Sometime after this initial prologue, Louis is invited to the island owned by one Lord Mortimer, where Sarah not-coincidentally went missing shortly before. Lord Mortimer is hosting a conference between many noted dignitaries, including George Washington and a young Napoleon Bonaparte, that aims to shape the future of the world. These historical characters are rather dubious in their accuracy — particularly this version of first President of the United States — but it’s a neat touch and helps flesh out the late 18th-century time period. The way the first three episodes build up the conference members and what they desire to achieve for their respective nations is one of the more interesting parts of the narrative. 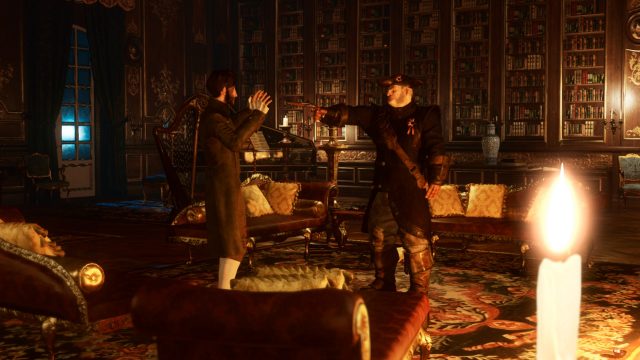 Louis will find himself in numerous less-than-ideal situations.

In the fourth and final episode, however, things turn to focus almost fully on the supernatural. This makes decent use of some of the clues dropped earlier in the game, but it can’t be said to be completely successful. It ends up throwing away a lot of the intrigue and politics for more personal motivations, ones that haven’t been given time to develop and players are just suddenly required to go along with. The final stages also appear to throw away certain decisions and outcomes; it’s odd that even the removal of a limb is only mentioned briefly before being generally ignored. It’s interesting to see some of the earlier decisions and the puzzle solutions — correct and incorrect — utilised in the finale, but the endings leave some big glaring questions unanswered. It also comes with a sense of a missed opportunity to dive more thoroughly into the more interesting historical aspects of the time.

Some of the puzzles are a bit obscure in their solutions — particularly those around the middle of the season that involve having to translate between various different calendars — but on the whole the investigative parts of The Council are very enjoyable. Louis will have plenty of things to interact with and options for what to do with them. Some of these make use of his specific skills, such as using his occult knowledge to determine the meaning of a symbol. Using these skills requires effort points, a limited resource only recharged at certain times or through a particular item that can be found around the manor. There are often plenty of red herrings or useless actions that players will need to be wary of, one example being dusting a page with soot to try and read a hidden message. These, and the limited effort point resource, help convey a need to make more immediate and considered decisions while discouraging the standard adventure tactic of trying everything. Though there are some little annoyances, the investigation portions are strong enough to hold interest, with plenty of flavour text and little touches that help solidify the character of the game.

In each chapter — of which there are three or four for each of the five episodes — Louis is given experience points based on his actions. These lead to level ups and the granting of skill points that can be put into the fifteen available skills. Louis can also equip up to three new manuscripts that may be found during his investigations, which convey bonus points to specific skills. The game also features status effects, which provide hindrances. For example, not letting players see the timer for decisions that require a swift response or adding an extra effort point cost. There are also limited-use items: in addition to the limited effort point refill there is a status effect removal, one that displays immunities and vulnerabilities for a time, and one that grants a free skill use. 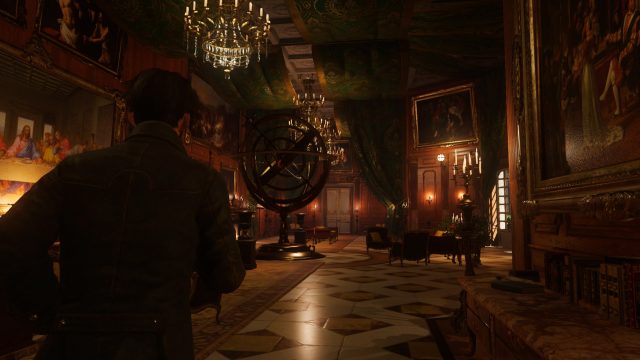 Certainly what one would expect from the home of very, very influential man in the 18th century.

There are plenty of conversations and special encounters to navigate. While the conversations are more about fact finding, encounters require Louis to deal with a specific situation, such as calming down someone pointing a gun at his head. These are divided into a number of choices for Louis, often with a number of accepted “incorrect” selections permitted before the encounter is failed. Failure in an encounter does not necessarily mean game over, but will cause some issues for Louis, either immediately or down the line. These encounters also let Louis use his skills, but players will need to be vigilant of characters being immune to certain skills, and hitting an immunity will make things more difficult. These immunities, as well as potential weaknesses, can often be ascertained beforehand through Louis’ prior investigations. These encounters are certainly a strong point of The Council, creating exciting and intriguing moments, and giving players neat ways to manipulate other characters and get out of tight spots.

The Council doesn’t aim for photo-realism with its character models, and the stylised approach works pretty well. It also does a good job with the manor setting, including lots of historical artwork, with plenty of effort going into selecting thematically appropriate ones that Louis can comment on. The lighting can make it hard to notice some small things, but the game helpfully highlights anything nearby that can be interacted with. The conversational nature of the game means there isn’t much on the action front, but the animations present do the job well enough. The audio isn’t too much to write home about; the actors provide decent performances but there is not much consistency in terms of accents. One French character does affect the accent, but most others simply don’t bother with the pretense. Music and sound effects are used sparingly, sitting in the background but not really adding much.

For those looking for an investigative adventure, The Council is worth checking out. It makes good use of its setting to create the initial intrigue, even if it veers away from it a bit too much at the end. The use of RPG and skill elements gives players a sense of progress as Louis learns more about the situation and becomes more adept at dealing with the other characters. While not all-powerful, The Council certainly has some interesting things to say.