Tears to Tiara II: Heir of the Overlord Review

How enjoyable players will find Aquaplus’ Tears to Tiara II: Heir of the Overlord will vary depending on what they are looking for in a game. The game is a solid tactical title when it gets into the gameplay, and even though there are those who will get a bit turned off by the length of the story sequences, many will find that Tears to Tiara II provides a thoroughly engaging and worthwhile tale. Visual novel fans, as well tactical RPG fans with a penchant for narrative, are likely to be at home here.

The previous game, which was released only in Japan, was set in a fantasy equivalent of Britain and drew from Celtic mythology and Roman history. Here, the Roman theme remains but the location has been moved to a counterpart of Spain and the Mediterranean, with the majority of mythological references and inspiration coming instead from that of Phoenicia. The game starts seven years after the province of Hispania was fully absorbed by the Empire, following the killing of the province’s former ruler who dissented to the ever-expanding influence of the Divine Church. An attempt to lure out an underground faction of supporters loyal to Hispania’s previous rulers causes the remaining member of the Barca clan, Hamil, to drop his peaceful facade, and begin a full uprising against the Empire. Hamil is joined in his crusade by a good number of amiable allies from both Hispania and the Empire at large, as well as the supposed incarnation of the goddess Ashtarte. 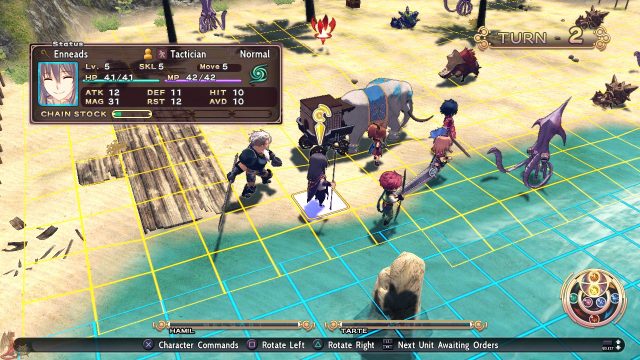 All future tactical RPGs will be met with cries of “where’s my elephant?”

Tears to Tiara II has one of the deeper narrative experiences around. Great care has been put into building the game’s lore, setting, and political situation. A large, deep cast helps things along, with the few characters that play up clichés still remaining eminently likeable. The game strikes a good balance between the serious nature of the plot and some more lighthearted scenes to help with character and relationship-building. It’s a story with many twists and turns, and although some of the foreshadowing and revelations are a bit clichéd, the effort that went into building an engaging tale is plain to see. However, things are liable to getting bogged down in backstory, politics, or flashbacks, with hour-long gaps in between story battles not a particularly rare occurrence, but at least a fast-forward button lets players speed through text as wanted. It would also have been good to give the game’s later antagonists a bit more fleshing out, although they generally do a good job of providing a necessary threat. Players can expect to spend around sixty hours working through the game’s campaign, the majority of which will be spent on the story.

The game’s battle system is relatively by-the-numbers as tactical RPGs go, but has been executed solidly. Players and the enemy (and then any third faction that may be involved in a particular battle) take turns to command all of their troops, featuring an assortment of melee, ranged, and magical combatants. One differentiator from other tactical titles is the party’s war elephant and the quadriga it drags around with it. The quadriga acts as a reinforcement hub, allowing members to retreat to safety inside or replace those who may have been defeated. However, it also has its own HP counter, and its destruction removes the reinforcement options. The game’s elemental system is also a slight change from the norm, with the elements split into two groups and each group having a boosted element at any one time. These boosted elements change each turn according to a circular chart, allowing players to work timing to their advantage. Despite not having too many unique aspects, battles are enjoyable, and good variation in scenarios prevents them from becoming tedious.

Character advancement is fairly straightforward as well, with characters earning both experience and skill points from any actions undertaken, a level up in experience raising various attributes, and often a new ability or spell with a skill level up. Passive skills help deepen things a bit; as well as those gained from levelling, players can have characters learn additional ones through manuals. These can then be assigned as passive skills to the character, but there is a limit to the number of assigned skills each character can equip. Characters also have a number of equipment slots which works as expected, with a basic crafting system in place to upgrade equipment or craft skill manuals. Setting up characters between battles and story scenes is pretty easy to do, although the UI is not the most intuitive in some areas, and helps in breaking things up into effective sub-chapters. 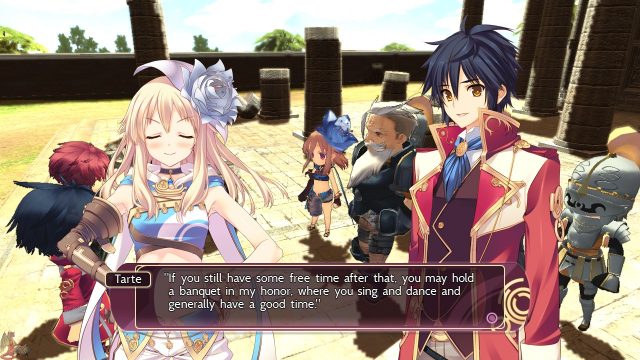 And there was much rejoicing.

Tears to Tiara II offers great accessibility to those more interested in the narrative than achieving tactical brilliance, with the easy setting providing very few difficulties. Those looking for some challenge are still catered for, however, with the other two requiring much more thought in battle. Another feature gearing the game away from frustration is the ability to rewind time back to a previous turn of the player’s choosing, preventing lapses in judgement from destroying too much battle progress. It should be noted that the results of specific actions remain pre-determined so save-scumming is not an option. The opportunity to return to previous battlefields to help catch up those units that may fall behind, or earn more money and items, is welcome but never feels like a necessity.

The game is fully voice acted, but only in Japanese; an entirely understandable decision considering both the very niche nature of the title and the sheer amount required. That said, the Japanese voice acting is of good quality throughout, tempering any disappointment in the lack of English audio. The game’s music is also well done, never overpowering but always providing a background that matches well with the appropriate scenes. Despite not being at the forefront technically, the game’s visual design works well. There’s lots of variation in the character designs, but all remain thematically consistent within the setting, and the same goes for the locations and battlefields. Combat effects are less than spectacular, but do the job required without taking anything away.

Tears to Tiara II successfully accomplishes what it sets out to do. The game provides a deep, engaging tale complemented by strong tactical gameplay. It isn’t packed to the brim with action, but those happy to sit back and enjoy the narrative will find it worth their time. 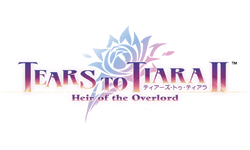