Stranger of Paradise Final Fantasy Origin, a collaboration between Square Enix and developer Team Ninja, drew mixed reactions when initially revealed in 2021. Was the world ready for a Souls-esque trek through the world of the first Final Fantasy? The title looks to deliver intense action combat mixed with staples from the classic JRPG series. While the game struggles to deliver a coherent storyline and features some questionable characterization, Stranger of Paradise: Final Fantasy Origin delivers compelling battle mechanics, a unique take on the classic job system, and a wallop of nostalgia. The end result is an aggressively fun, yet flawed, romp through the land of Cornelia.

The game sees players control Jack, a man whose primary characteristics are anger and propensity for violence. At the onset, Jack wanders into a field near Castle Cornelia where he coincidentally meets Ash and Jed. The three of them grunt acknowledgment of their possession of crystals and enter the castle. To prove themselves to the King and Chancellor, the trio travel to the Chaos Shrine where they square off with a dark knight who is revealed to be Neon, a townsperson consumed by darkness. Once defeated, Neon joins the party and the four are tasked by the king with purifying the four elemental crystals and restore peace and order to the land. Players familiar with the first Final Fantasy will recognize many locations and character names, though the presentation is markedly different from the original.

Stranger of Paradise revels in this top-down subversion of tradition. The game is not a remake, but a re-imagining of the original Final Fantasy that provides names, personal histories, and motivations for each of the crystal bearers. Most of the characterization is obscured with a cliched amnesia plot that unfolds incrementally upon the conclusion of each story level. Other aspects of the story are doled out in bits of exposition left behind in the form of scattered diary entries and datalog points. The game fully embraces this exceedingly vague approach to story telling, but it frustratingly makes the first half of the game just a group of interchangeable Abercrombie models in cosplay who are angry but never quite sure why. 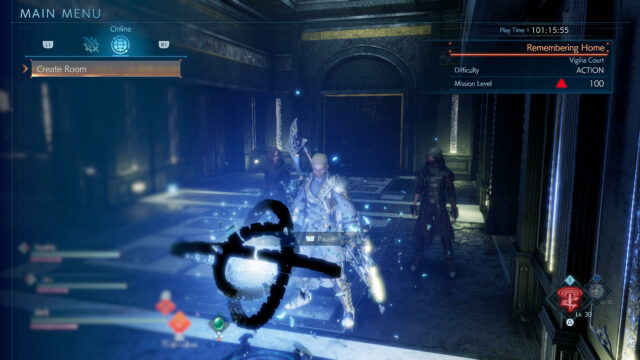 Even as the story begins to piece together, it is through a series of disjointed cutscenes featuring stilted dialogue that diminishes engagement with the player. Ultimately, the story does culminate into a satisfying and thought-provoking conclusion that leaves players wondering when or where in the exact timeline of the first Final Fantasy does this game take place. It’s a shame the bulk of the game fails to provide much motivation or explanation into the ongoing of the story. Thankfully the game just happens to be so much fun to play.

Battles are fast, furious, and tough, as players must first study enemy movement patterns, employing blocks and parrys to allow them to counter for substantial damage, including obtaining an enemy’s ability for limited uses. Players directly control Jack, who has the ability to shift between two equipped battle stances, which are unlocked at a steady rate until all twenty-eight options are available. Expect to see classic jobs like Red Mage, but also interesting hybrid roles like Sage, which combines both advanced protection and elemental magic.

Enemy encounters may seem simple enough, but the battle system is as complicated as the player wants it to be. Regardless, there is no spamming the attack button to force your way through, even on the easiest of the numerous difficulty settings. As the party defeats enemies and gain experience, players can advance through skill trees to unlock stronger abilities and new jobs. Though some of them function similarly, the number and variety of jobs offers an embarrassment of riches. The game also implements a break system, where enemies that sustain sufficient damage give an on-screen prompt that allows Jack to use a final attack that crystallizes and destroys the enemy. Boss encounters are always flashy and dramatic, requiring efficient use of skills to take them down. 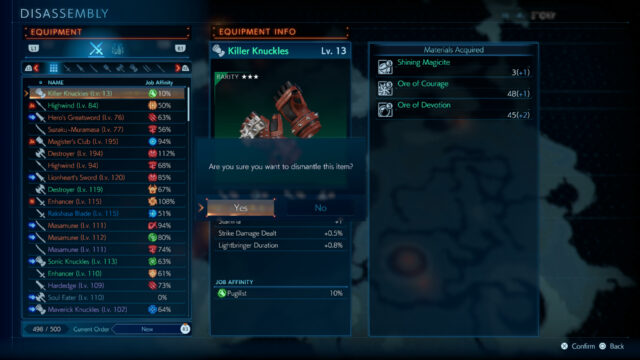 Crisp menus and user interface are plentiful. Expect to manage plenty of loot.

With so many abilities and jobs to unlock, experimentation is encouraged and rewarded. This also applies in combat as players will be expected to shift between weapons and abilities to take advantage of weaknesses in order to prevail in battle. Aside from managing party jobs, players will collect hundreds of pieces of equipment as loot during dungeons. Loot rains upon the player in this game, and as a result Jack and his gang can expect their outfits to change frequently, even mid-dungeon. While Stranger of Paradise provides limitless customization in this regard, the constant shifting of equipment is an annoyance exacerbated by having to manage party inventory to accommodate it all. This overwhelming loot system is a mark against an otherwise very pleasant user interface, that features sleek intuitive menus that are easy to navigate.

While the story is rather linear, players are able to repeat levels by accessing them through the overworld map. Additional side missions are also present and provide tantalizing rewards including unlockable jobs for Jack’s friends and rare equipment. These repeatable missions are easily digestible chunks of gameplay that make grinding simpler with smaller maps and short quests. These side missions are perfect fodder for the game’s online component, which allows players to join another’s game and fill the role of a party member. Players who are struggling with a specific mission or boss fight are able to use this system to resolve these trickier encounters. The addition of this online component increases replayability and eases the burden of grinding, especially towards the end of the game. It feels like an accomplishment to develop a rhythm with other players online to breeze through a handful of missions, and the surplus of rewards is a nice touch as well.

Team Ninja has taken an action-oriented combat system and seamlessly fused it with the original game’s DNA to provide an authentic and unique experience. Enemy designs reflect the essence of Final Fantasy through a darkly grim lens. The developers went to great lengths to transcribe the 8-bit renderings of the enemies to give them new life. Those familiar with locations and enemies from the original title — and across the series — will enjoy seeing the sprite designs come to live in grotesque detail, particularly in the incredible boss battles.  Graphically, Stranger of Paradise runs with no issues on the PlayStation 5. However, the game is by no means a graphical powerhouse as there can be some instances of slowdown during frantic encounters. Some locations are also inspired from prior games in the series, including the flying fortress from Final Fantasy VI. 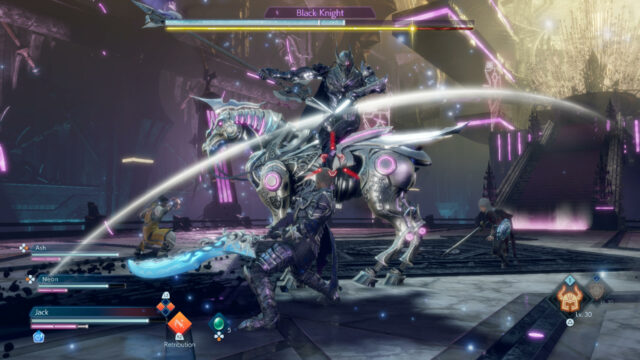 Boss encounters are dangerous and well-designed.

Stranger of Paradise continues the series’ rich tradition of outstanding music. Naoshi Mizuta returns to the series, providing another set of hyper-pulsing electronic themes with generous callbacks to the original Final Fantasy soundtrack. Other mainstay series composers return either to re-create music or lend prior motifs to this title, with some incredible arrangements of classic battle tracks. These callbacks are a nice touch, and series fans will delight to recognize not only songs from the original game being represented in great detail but also areas from prior games in the series. The game also excels in terms of sound design, with an abundance of ambient effects including the snarling of monsters around the corner or the buzzing of a Thunder spell. The voice cast is varied and pleasant, with Laura Post’s Sophia a true standout in the main cast.

Stranger of Paradise Final Fantasy Origin attempts to fuse the original’s sensibility into a fast-paced action RPG. For the most part, it is successful with intense action gameplay and beautiful music. Adjustable difficulty options and online co-op make the game accessible to a myriad of gamers without diminishing challenge or sacrificing replayability. It’s somewhat fitting that in this topsy-turvy action spin-off, the only thing that’s truly upside-down is the presentation of the original game’s story. Even as the narrative stumbles, the core gameplay is strong enough to motivate to see this story through to completion, no matter how chaotic.