Blinded by the ‘Lite

I am old enough to have owned a Nintendo Entertainment System and a copy of the original golden cartridge of The Legend of Zelda back when it was actually out for the system. Pre-internet, pre-walkthroughs, pre-FAQs, locating all the dungeons and making my way through them was completely up to me, using only whatever tidbits I could find in the Nintendo magazines I owned at the time. Sparklite is, at its heart, a homage to the simple, fast-paced, sword-swinging action of that long-ago title, complete with beautiful pixel-art visuals, and the roguelike element of a reshuffled world map every time you fall in battle. It’s easy to pick up and play, and just as hard to put back down.

The story is pretty sparse, but it’s not the star attraction here, and doesn’t need to be. Ada is a gifted engineer, able to comprehend complicated machinery and swing a mean wrench. During the game’s opening, she is separated from her robot companion Wingnut when her airship has a mechanical malfunction and crash lands in the land of Geodia. Navigating the first few screens of the top-down 17-by-10 grid causes her to meet a widget merchant who reveals that Geodia has been wracked with earthquakes of late, called Fractures, and that the other inhabitants of the world have sought refuge in a floating city. The player is allowed to continue playing for the time being, but when Ada is eventually knocked unconscious in battle, she is whisked up to the heavens by a metal claw, and brought aboard the Refuge, as its called, which serves as the game’s main hub. 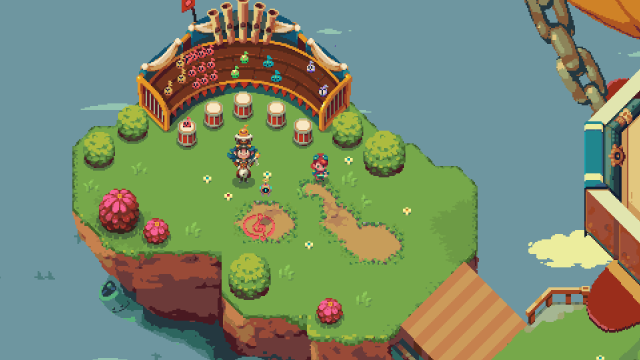 Collecting all the missing Beats gives players something keep an eye peeled for during their travels.

From here on out, the game is as much about resource collecting as it is about exploring the ever-changing surface of Geodia, with the resource in question being more and more Sparklite. Sparklite is the game’s currency, and is found by smashing barrels and boxes, cutting down plants, and killing baddies. Everything in the game hub functions on Sparklite, from purchasing consumable widgets and stat-boosting badges, to fusing said badges with one another to increase their potency and attaching them to Ada’s wrench. Upgrading the various facilities in the floating refuge requires even more Sparklite, and it is equally important to expand the widget shop as it is Ada’s badge grid or the gadget workshop.

It takes a while to build up enough Sparklite to turn Ada into a powerhouse, amassed little by little during the many trips to Geodia’s surface. But it is necessary to build up her strength, as it’s the only way to be up to the task presented to her: to find and defeat the four Titans that have been sent out by a shadowy figure known only as the Baron to hunt for ancient relics left behind by the land’s original creators. The Baron’s ruthless destruction in his attempts to find these relics is the cause of Geodia’s constant upheaval; each time Ada is rescued from the brink of death and brought back to the floating sanctuary, the entire world shuffles itself, with landmarks either changing location or disappearing to make way for others to appear. The game assembles a brand new world layout for each run, which typically last fifteen to twenty minutes, only keeping the barest geographical consistencies, such as which general direction each of the five distinct regions can be found in. 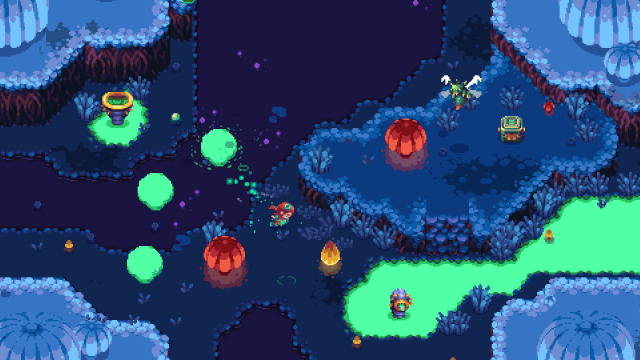 Each of Geodia’s regions has its own aesthetic theme, with the Acid Bog being the most…psychedelic.

Each run is a new experience, and there are enough things to discover to make each region worth several repeat visits, though it’s a bit of a shame that there’s no option to return to the Refuge in the middle of a run, outside of being beaten in battle. The content on offer is paced well enough that, by the time players have plumbed the depths of each region’s secrets, they are strong enough to face off against that region’s Titan boss and move on. Titans must be defeated in a set order, as each one gives Wingnut a new ability needed to access the next region. Once all four are downed, the gate to the game’s final region becomes unlocked, and, while dying means Ada’s store of consumables is depleted, boss progress and Ada’s Sparklite cache are permanent. This helps the game maintain a constant feeling of progress, no matter how slight, and contributes heavily to its addictive “just one more run” feel.

It helps that there are plenty of side activities to keep one busy in the world of Sparklite. A running collect-a-thon to bring the band conductor back all her missing Beats, little balls of musical talent hidden all over Geodia, will keep players busy throughout. There are a handful of other NPCs to encounter and rescue in the wilds of Geodia, most of which will offer some sort of reward before taking up permanent residence on the floating island. Sibling explorers Margo and Pogo constantly get separated from each other, and will offer helpful map badges when reunited. That’s not to mention the caves, monster furnaces, and a handful of other assorted activities, just enough to offer something new to do around each corner. There’s even a couch co-op mode available, in which the second player takes on the role of Ada’s floating robotic sidekick. 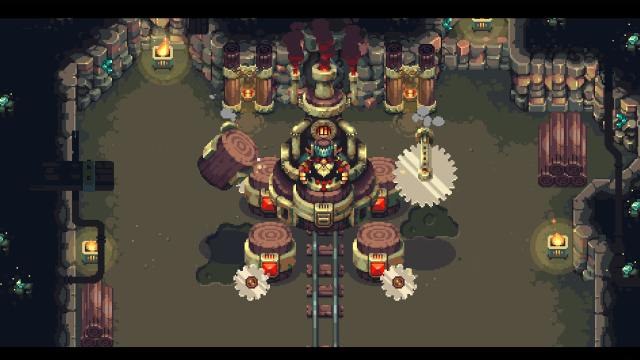 The Baron’s Titans aren’t as fearsome as they look, but are incredible to look at nonetheless.

Making one’s way through the world of Geodia means coming up against all manner of unfriendly creatures, be they part of the Baron’s army of Gremlins or simply the animals native to its wilds. Engaging in combat is made very enjoyable due to its simple nature and smooth execution. Most of Ada’s moveset consists of swinging her wrench, which she can extend into a three-hit combo, and using her rocket-propelled boots to dodge incoming attacks. Enemies have fairly simple but varied attack patterns, and late-game groups of different enemy types can be tricky to dispatch. There are a few other tools at Ada’s disposal, though they are rarely worth the trouble it takes to employ them. Charging an attack lets Ada swing her wrench in a hammer-like downstroke, and there are a handful of Sparklite-based gadgets to find with various capabilities, ranging from a bow and arrow to a radio-controlled balloon bomb. These gadgets, which must first be mastered in short challenge temples before Ada can reverse-engineer them back at her home base, are also used to solve the occasional puzzle, though this particular mechanic is, sadly, used all too sparingly.

Sparklite is sure to please fans of pixel art graphics. Environments and characters are nicely detailed, rather than going the grainy route, and its use of a rich color palette is among the better ones in recent memory. It’s quite impressive how much attention to detail has been packed into a screen of pixels here, and it honestly rivals its soundtrack in quality. Each area has a lovely theme song associated with it, but even story beats and boss encounters — particularly the final boss, who comes with a considerable difficulty spike — feature great compositions, even if they only last briefly. The gameplay may make it hard to stop playing, but the graphics and music ensure that players will enjoy the time spent with it.

What makes Sparklite noteworthy isn’t so much its gameplay ideas, which will certainly be familiar to fans of the genre. Rather, it does an admirable job of putting an engaging pick-up-and-play spin on a simple formula of roguelike elements fused with classic sensibilities, and becomes something greater than the sum of its parts. It isn’t incredibly lengthy, but each moment feels like progress made toward a larger goal, with plenty of inherent replayability baked right in; a top-tier soundtrack and pixel art presentation are just icing on what’s already a tasty RPG cake.