Getting a single high-quality South Park RPG was unexpected, but getting a second is downright astonishing. South Park: The Stick of Truth did so much well that South Park: The Fractured but Whole had a lot to live up to, and mostly succeeds. Ubisoft’s obtrusive shenanigans are more blatant in The Fractured but Whole, which is irritating but hardly a dealbreaker. The game itself is another definite high point in the realm of licensed RPGs, and one that should be experienced by South Park fans who have even the slightest bit of interest.

The Fractured but Whole acts as a direct continuation from The Stick of Truth, where the player took control of The New Kid. Events pick up with the South Park kids still playing medieval fantasy, but after an introductory phase they switch to playing superheroes. The New Kid is unable to translate the myriad skills of fantasy archetypes acquired in the previous game into superhero affinity, but Cartman (as The Coon) condescends to let another participant into the scheme. His plan is to use Coon and Friends, his superhero group, to track down a lost cat with a $100 reward. The quiet Colorado mountain town proves to have quite a few impediments to what seems a simple idea, and soon The New Kid’s astonishing powers of flatulence will be needed to save the day.

While it’s possible that a newcomer to the series will get by, this is a narrative constructed to treat longtime fans of the show first and foremost. References to events from South Park‘s long history come fast and furious, including such far-ranging material as Kyle’s cousin from New York and the addictive properties of cat urine. The Stick of Truth had more of a narrative throughline, while The Fractured but Whole allows some events to happen without much connective tissue to the rest of the tale. It is nevertheless highly entertaining for series veterans, and even manages to be a bit poignant with regard to The New Kid’s family dynamic of bitterly estranged parents. 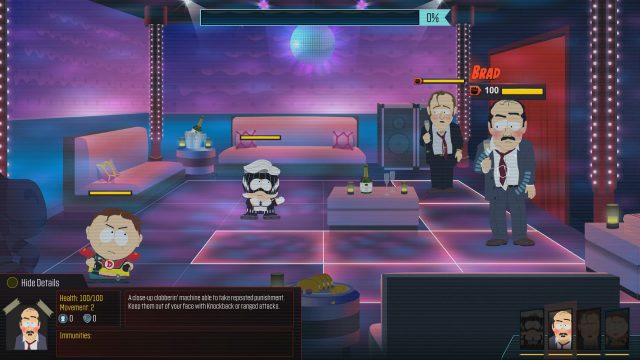 There are indeed men too drunk to realize what they’re doing. These guys are just that sort of men.

Exploring the landscape of South Park is accomplished in a way very similar to that found in The Stick of Truth. The New Kid is able to move around the town and inside various locations, interacting with multiple persons and objects such as parking meters filled with spare change that can be taken free of consequence. Plenty of locations are initially inaccessible until The New Kid learns some new skill to broaden access, such as the ability to shoot rodents across the screen and into open electrical outlets to short-circuit devices.

Enemies are visible on the screen and can be avoided or affected negatively prior to beginning a fight, such as by projecting a fart that understandably grosses out those in the vicinity. Combat itself is a tactical affair in this title, as characters move around a grid and must grapple with attacks that affect specific areas. Knocking enemies back so that they take damage by hitting something else, or are unable to immediately retaliate due to being too far away, are perfectly viable options. Many larger encounters take advantage of the tactical aspects by forcing the player to do something more complex than simply beating enemies into the dirt, such as needing to be affected by a specific status ailment and subsequently inflicting that contagious condition upon various other parts of the map.

Combat features a wide mix of possible approaches due to the many ways The New Kid can be developed. The Coon will allow The New Kid to multi-class as the game proceeds, mixing and matching skills from a variety of superhero categories. Having brawler abilities centering on brute force encourages approaching a fight very differently than as a cyborg sporting technological ways to distract and destroy adversaries. Many other South Park kids are also present as party members, each of them with unique abilities that encourage experimentation if a fight is proving troublesome. The difficulty can be altered at any time should matters get frustrating though. 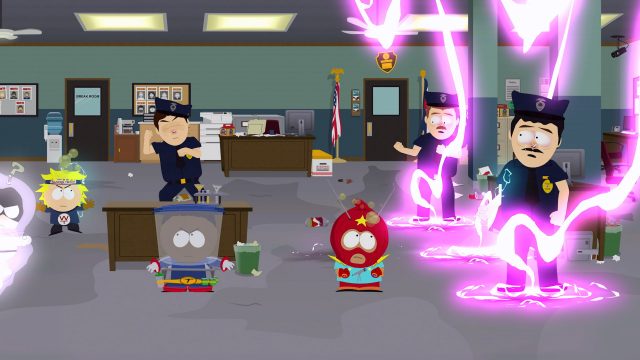 Given that these are the police of South Park, they generally have it coming, even if ‘it’ is powerful bolts of electricity.

Aside from current moves and companions, the major way to affect fights is through equipping items that increase Might. Increasing the player’s level doesn’t do a lot by itself, but does unlock more slots to fit extra Might-enhancing items. The simple increase of a single raw number isn’t all these equipment pieces can do, and almost all of them come with multiple additional effects that can also be key to triumph. Going into the menu for this and other functions, such as examining all of The New Kid’s current followers on Coonstagram, is efficiently done. The only interface problem is an occasional technical hiccup, usually when NPCs on screen fail to load and remain frozen.

What unfortunately cannot be ignored is Ubisoft’s avarice. Despite the presence of a huge number of cosmetic items to give The New Kid thousands of combinations in appearance, a reminder of premium items available only by paying extra money to Ubisoft’s club is always present within the inventory. At the bottom of the compendium showing everything available are a few things gated off for those who contribute additional money to the company, and these premium pieces are always around to annoy. 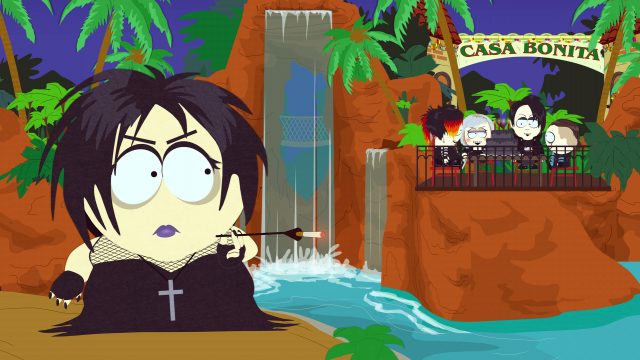 Beware the unyielding hatred Vampire kids bestow in some people.

All dialogue is voiced by the same performers as in the series, and the performances are as entertaining as expected. Characters have something to say constantly, and The New Kid will hear unique things by bringing different companions into specific encounters. Much music from the show is also heard while playing, but a high quantity of original compositions has been created as well by series veteran Jamie Dunlop. Battle themes in particular are enormous in number, with almost every boss having a unique one and regular enemy groupings usually having something separate too. The sheer quantity of musical contributions makes it hard for everything to stand out, but many of these tunes are indeed very good, and even the less memorable ones complement the action well.

Like The Stick of Truth, The Fractured but Whole looks as if an episode of the show is unfolding on the screen. South Park‘s visual style makes for something easy to capture in video game form, but doing it successfully is still worthy of recognition. Powerful moves in combat also prompt some impressive visual displays in the South Park style, plus the multitude of foes are captured distinctly. 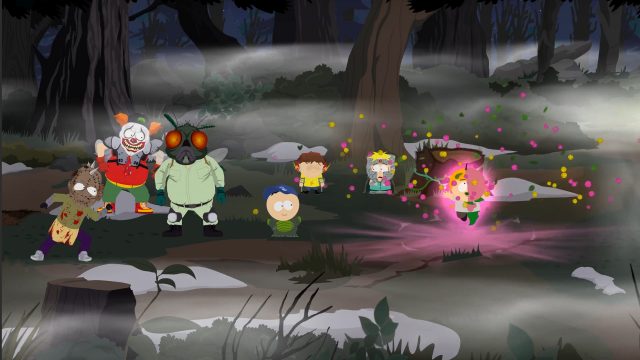 The refreshing flavor of Mint, combined with a satisfying Berry blast, is amazingly effective at stupefying monstrous adversaries.

Many recent games have DLC, and The Fractured but Whole‘s is a mixed lot. Some additional cosmetic items are nice, even though the game is already full of them, but a feature where Towelie offers irregularly supplied advice to the player doesn’t add much, and a simulation challenge putting nasty enemies together is solely for combat junkies. The two significant content additions From Dusk till Casa Bonita and Bring the Crunch are absolutely worth the price though. Casa Bonita finds The New Kid journeying to the eponymous theme restaurant in an effort to stop someone from joining the Vampire Kids, while Crunch takes place at Lake Tardicaca, where the camp counselors are being permanently dispatched to prevent this year’s session from taking place. Neither of these is connected to the overall narrative, but spin entertaining smaller tales of their own. Each one also has a new character to use in battle, and an additional class for The New Kid, all of which can be used in the main narrative. Together they don’t add more than about five or six hours to a game already easy to complete in around thirty, but they’re definitely worthwhile.

It’s difficult to recommend this title to anyone without much knowledge of South Park, because the experience is suffused with material only fans will fully appreciate. This is nevertheless one of the occasional licensed titles that actually does its source justice, and is an incredibly easy recommendation to anyone who likes RPGs and has some appreciation for Trey Parker and Matt Stone’s amazingly long-lived series. Ubisoft’s mercantile machinations are aggravating, and it’s not quite as cohesive an experience as The Stick of Truth, but it’s absolutely worth playing.