The relationship between sports and RPGs has gotten ever closer over the years; not just with sports games introducing RPG-style growth in their systems, but with RPGs bringing their own take on sports like that which highlights a bow string.

Soccer Story is one such title, offering a cute take on soccer (or football if you prefer) and using it as a mechanic for its set of adventure quests and puzzles. Unfortunately, annoyances, technical issues, and a flawed match system prevent it from being little more than a brief diversion.

Soccer Story is set in a world where soccer is controlled by Soccer Inc., which keeps a tight lid on who can play and has shut down any other teams. Its control was established following a nebulous calamity that occurred during the final of the prestigious Apple Cup. However, a year after the calamity, a magical ball makes it way down to a young boy or girl, and sets them on the path to restore the sport as a game for all. First, however, they need to find a team. 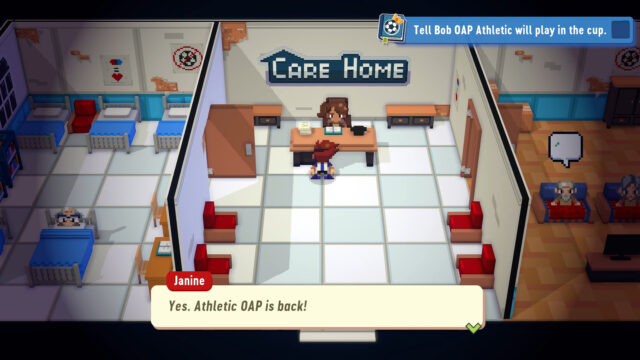 Once a team is assembled, opponents are needed, and there aren’t many to choose from.

Soccer Story is primarily about undertaking quests, first to form a team of five players, then to find opponents within each of the four regions, play a short cup, and progress to the next region. Each set of quests is punctuated by a short five-a-side match or two, or a one-on-one (really two-on-two including the goalkeepers) match, against a selected opponent. The story itself is simply an excuse to get players from one quest to the next; it has some humourous moments and cute touches, but does little to engage players in any plot, while the characters are one-note, if they even get that much characterisation.

What Soccer Story doesn’t lack is challenges and mini-games. Every zone has its own set of challenges, the most common involving finding and kicking the ball against various targets or into goals placed all round. Other challenges can be found all over the world naturally over the course of the game as the main quest will get players searching everywhere with its lack of navigational assistance. It lacks any form of objective markers on the map, while some quests force players to spot incredibly hard-to-see cues or lack reminders of what players are meant to be doing. Certain challenges can get frustrating, especially as it’s very easy to be slightly off with targeting, though there’s never any penalty for failure. 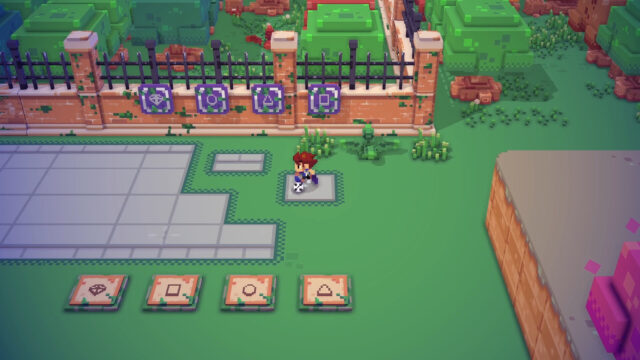 The actual four-minute matches use a very simplified version of the game. There are no fouls or offsides, nor any formation or squad options, with players having the same four teammates throughout. Players start off with the ability to pass, shoot, or tackle, but unlock other options, such as a short sprint or the ability to curve the ball as they progress. The RPG elements are incredibly light, with players simply using medals obtained from quests and challenges, or bought by spending coins found all over, to upgrade the four stats up to a maximum level of five. The most interesting of these is the shot power stat, which impacts the quest system the most as the players’ starting kick power is too weak to hit many of the targets.

The match system starts out chaotically fun, but quickly reveals major weaknesses, mostly concerning the goalkeepers, which players will find easy to exploit. Goalkeepers act on their own and there is a stamina system associated with them, stated to operate so teams on the attack are more likely to score. However, this doesn’t work in practice. When the ball is close to the goal during a five-a-side match, goalkeepers will often pull off strings of saves in quick succession. However, they are just as prone to being utterly useless against and completely misjudging many shots from long range, making trying to focus on build up play pointless. Players may as well just shoot whenever they can. Meanwhile, the one-on-one matches have a different problem in that players can readily get the AI stuck in a cycle where they can pile on goals, and scoring ten-plus goals becomes a trivial matter. 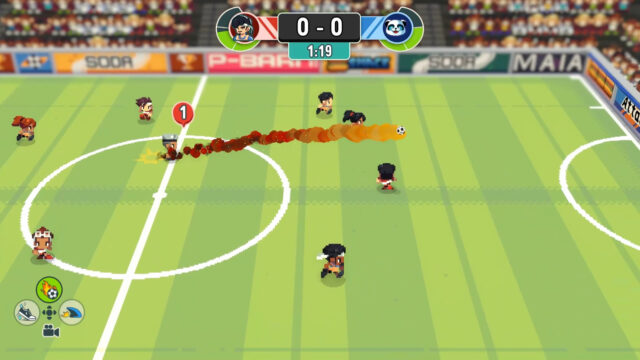 Often more effective than a shot from closer range.

Another significant issue, at least experienced on the Switch build, comes from technical problems. There are some very noticeable dropped frames as well as numerous crashes, especially in the later portion of the game. One particular quest-related action appears to trigger crashes almost every other time it’s used, though the frequent autosave prevents any loss of progress. However, a bug also appeared in the final five minutes that completely halted progress and made the final match impossible to activate.

Soccer Story’s visuals are at least cute. The world design has a good amount going for it as well, with plenty of interesting areas to explore and nice little touches to take note of, working with the game’s puzzles and challenges. Meanwhile, the audio is completely forgettable and largely goes past unnoticed, though it at least adds some urgency and atmosphere to the matches with its sound effects and reactive noises.

Soccer Story provides some enjoyable basic entertainment that comes from just kicking the ball around and taking on the challenges and targets as players explore. Some of the puzzles and challenges are good fun and satisfying to complete, but there are also many that are made more frustrating than they need to be. With a flawed match system that becomes trivial once its workings have been figured out and technical issues that stack up as the game progresses, it’s incredibly tough to recommend.